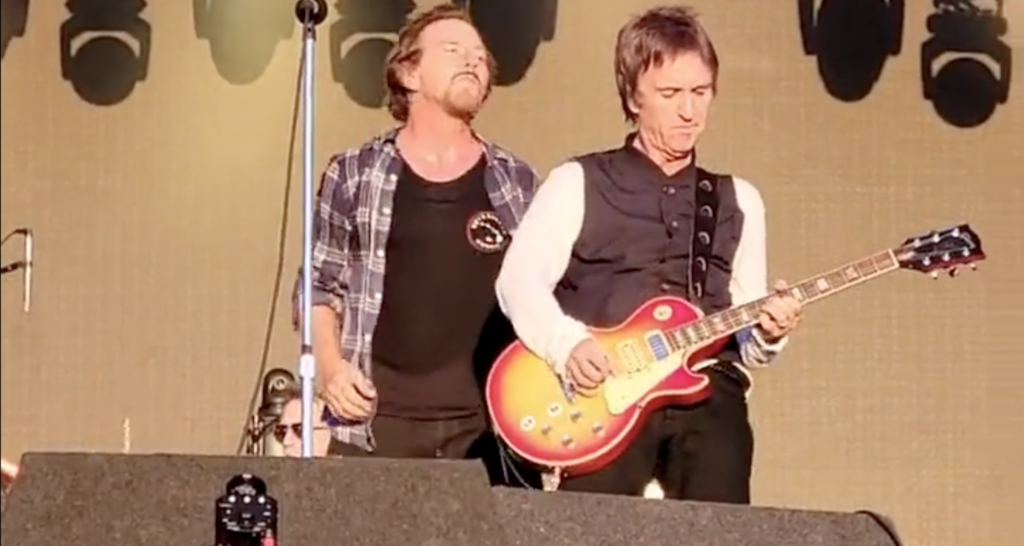 Pearl Jam had a special surprise for fans at their BST Hyde Park show in London last night. A few songs into their set, the band brought out Johnny Marr to help play a cover of Neil Young‘s “Throw Your Hatred Down” off the Pearl Jam-assisted album Mirror Ball. The Smiths guitarist then came back out at the end of the set to perform a cover of The Who‘s “Baba O’Riley.”

This isn’t the first time Marr has played onstage with Eddie Vedder. In 2018, he joined the Pearl Jam frontman during his Ohana Festival to cover The Smiths classic “There Is a Light That Never Goes Out.” He also came out during a Pearl Jam show in Portland back in 2006 to help the band cover “All Along The Watchtower.”

Watch fan-shot footage of “Throw Your Hatred Down” and “Baba O’Riley” below.

Pearl Jam kicked off their postponed Gigaton tour in May, but unfortunately had to cancel their remaining west coast dates two weeks later after bassist Jeff Ament tested positive for COVID. His diagnosis came after drummer Matt Cameron also contracted the virus. The band made due for a few nights by rotating drummers, including their original drummer Dave Krusen.

The band will spend the next couple months in Europe before heading back to North America in September. In October, Vedder will host another edition of his Ohana Fest, which he plans to co-headline.

2022-07-10
Previous Post: Prince George makes Wimbledon tennis debut in the Royal Box with the Duke and Duchess of Cambridge
Next Post: Thom Yorke Confirms The Smile Is Working on New Music