Neil Finn and his son Liam had a surprise for fans at the end of their set at Bourbon & Beyond festival on Saturday. Eddie Vedder and his Pearl Jam touring bandmate Josh Klinghoffer joined the father-son duo for their last two songs. Together, they covered Crowded House‘s 1986 single “World Where You Live” and Split Enz‘ 1980 track “I Got You.”

Vedder and Neil Finn have performed live together many times, and even recorded a collaborative single in 2013. Before diving into “I Got You,” Finn noted that it was the first song they ever sang together during a show in Auckland, New Zealand, to which Vedder quipped, “No, I sang this song with you when I was 13 years old. You were on the vinyl and I was playing it loud on my stereo. It was way before we played it live.”

Neil & Liam Finn’s setlist was a mix of Crowded House and Split Enz covers, with a few of Liam Finn’s songs sprinkled in. See fan-shot footage of Vedder and Klinghoffer joining them onstage below. 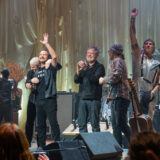 Pearl Jam played Bourbon & Beyond later that night as a headliner. The set was part of their fall North American tour, which wraps up in Denver on Sept. 22. Vedder will continue on with a string of solo tour dates that kicks off with his annual Ohana Festival the first weekend in Oct.