When Chris Cornell died in 2017, fans all over the world mourned the loss of a voice and talent gone way too soon. That outpouring of love and continued support helped the family he left behind — wife Vicky Cornell and children Toni and Christopher — who are emotional but proud to keep the memory of her husband and their dad alive via No One Sings Like You Anymore. Cornell’s first full posthumous release is a 10-song gem that takes on hits and lesser-known songs from artists still with us, along with long-lost legends.

While Cornell’s version of Guns N’ Roses’ “Patience” and Prince’s “Nothing Compares 2 You” are well-known to fans, stellar new covers included on the album are Lorraine Ellison’s powerhouse “Stay with Me Baby” and the Janis Joplin-popularized “Get It While You Can,” an irresistible version with slightly different lyrics.

In a conversation earlier this week, Vicky noted that her late husband was proud to be an “architect” of grunge, and with the new record, was thrilled to give back to his fans through covers of songs and artists influential and important to him. The LP — which is significantly noted as Part 1 — was recorded, completed and sequenced by Cornell in 2016. Producer Brendan O’Brien and Cornell play nearly all the instruments, and Cornell’s wife and kids were in the Los Angeles studio with him for the entire process. Vicky Cornell tells us more about the album, which Chris wanted to tour in support of. 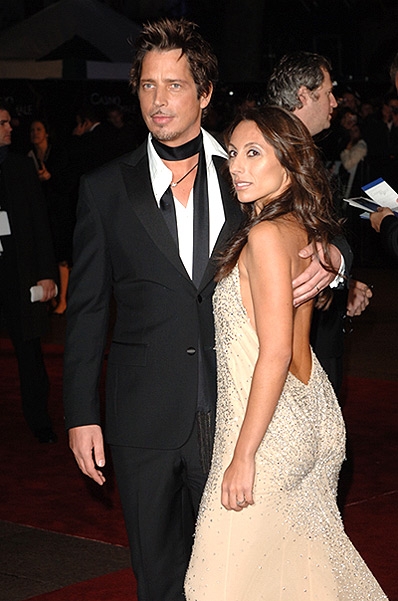 SPIN: Tell us how and why Chris chose the artists and songs on this record.
Vicky Cornell: Chris said to a bunch of friends — a handful — ‘what song would you want to hear me cover?’ Everyone started sending him ideas, and he was like, ‘no, no, that’s not what I’m looking for.’ He wanted obscure and more unexpected. So the list started like that. He just kept working on this list and then he narrowed it down to the ones that resonated with him. Or that he had a deep… [songs that] inspired him. Whether it was the vocals on it; you know, like Carl Hall, for example, Chris was a Carl Hall fan. Some of it was songwriting, some of it was the way that they sang, and some of it was just that the songs themselves resonated with him personally like he had a personal connection. From [John Lennon’s] “Watching the Wheels” or Terry Reid’s “To Be Treated Rite,” you know?

“Stay With Me Baby” is a favorite.
That actually came because he was asked to do a song for the [HBO] show Vinyl. And I can’t remember what song it was, but he saw that another artist — I think it was Julian Casablancas — got the song that he really wanted to do. So he chose “Stay With Me Baby” for Vinyl. That’s where it first appeared. I remember him singing it. I just walked into the room. I could hear his voice throughout the entire house. It was beyond, it was just like, “Shit, you know, now I understand what everyone says about my husband.” It’s true, that song does that. Imagine, he was just up in the studio, and you can hear it throughout the house. I just walked up there, and I looked at him and said, “You’re such a showoff. Like, that is amazing. Whatever you recorded, that should be it, the final.”

Was it? That’s the version on the album?
He went back, he cleaned it up. I used to hate when he would do that! I would always be, “What did you do to it?” And he’d be like, “What are you talking about, it’s the finished version.” I’d be, “No, but you made clean.”

Well, that means we have the demo version to look forward to!
Exactly! I’m looking forward to doing that too. Because really, Chris’s demos are amazing and I think that it was the same thing as what you saw in his acoustic shows. You heard this pure rawness and it didn’t have to be perfect, and it was perfect. That’s what made it perfect; he had a special thing, a very special thing.

Some of the other songs, like “Patience,” we were all together with my children, we move like a caravan like, the dogs — we have three dogs — it was crazy. That one came about on the road because my daughter was a huge Guns N’ Roses fan and a huge Axl fan; she was going through the phase of literally wearing the bandana and everything. So she says, “Daddy, can you teach me how to play this song?” He started teaching her, and was like, “Yeah, that’s pretty great.” And then I think [GNR] announced that they were going to go out and tour he says, “You know, I’m going to record this. This is good, and I’ll pay tribute to them at the same time.” Is your Toni on that song in any way or on any of these tracks?
Not on this round, but she’s on… some…

…Let me jump ahead to this question because this says Volume One. So does that mean there’s a Volume Two?
Something’s coming…

Fair enough. So Guns N’ Roses and Soundgarden came up at around the same time… were Chris and Axl Rose friends?
Well, Axl, they were out on tour together. And Chris hadn’t told him that he did it. Axl pays a lot of respect to Chris. Every night when they’re out on tour [before the pandemic], he played “Black Hole Sun.” Every night. He did that for years. And that means a lot because it keeps Chris alive, you know, and that’s the most important thing for me, for my children, that he’s talked about all the time.

How did the lyric from “Black Hole Sun” come to be the title of the record?
Since Chris passed, the fans have given me, my children, so much. Even just their love for him, it just does a lot for us. I can’t thank them enough for doing that. Personally, they have been so supportive, and it continues. Even actual fan mail brought over to Hollywood Forever [Cemetery] and boxes full of stuff. I had seen that a lot, “No one sings like you anymore,” and that tag, it’s his tag. But knowing Chris, it’s also like him paying tribute to these artists, you know, who have passed… and I feel like it kind of went around full circle for everybody.

Because it’s a covers record, I just thought, you know, he’s one of the greatest voices of all time, and this represented that. Both him as an artist, the other artists because they’re all — every single one of those songs are, wow! Every one of those artists, my God, they did an amazing job on their own.

So why now to release this?
You just feel like the last three years you’re in the Twilight Zone, it’s impossible. Your entire world is turned upside down. anything that made sense didn’t make sense. Then you know, [COVID] happens so I just felt like Christmas was the perfect time to be giving back. And really just missing him so much and wanting to have him be with us for the holidays. I just felt like now he should be here with us. I just hope everybody loves this as much as we do. I just thank fans for everything they’ve done for him and keeping his memory alive. We’re grateful.