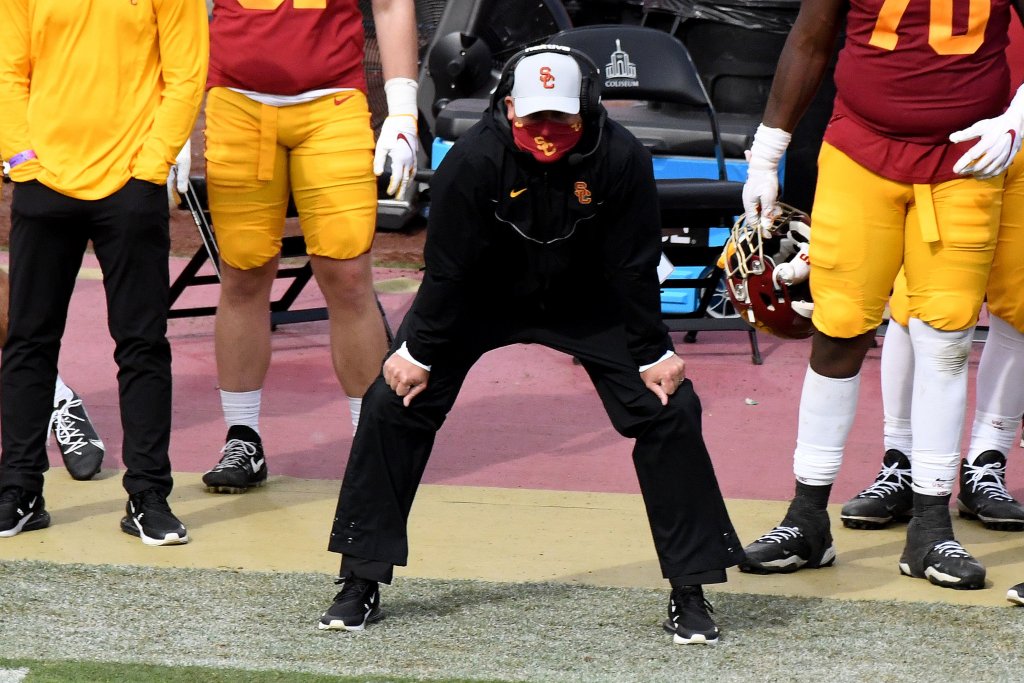 In 13 games in 2019, USC went for it on fourth down 10 times. Total, all season. And in the season-opening win against Arizona State on Saturday, the Trojans made eight fourth-down attempts.

Some of those were born of late-game desperation, as USC scored the two touchdowns it needed to win in crunch time on fourth down. And some of it was a strategic decision, with head coach Clay Helton believing the Trojans needed touchdowns to beat the Sun Devils, not field goals.

But it shows a willingness by Helton to take risks with this iteration of the Air Raid offense under coordinator Graham Harrell and quarterback Kedon Slovis.

“I tend to be on the aggressive nature when you have a good offense like we do, which I think is going to be a really good offense that had faith in them to be able to pull those out,” Helton said on Sunday on a Zoom press conference. “Now there may be other games that we’re in the lead or just keeping on adding up points may be more valuable, but playing a Jayden Daniels and that offense, I thought touchdowns over field goals were going to be important in that game.”

The situation, Helton explained, was important to each decision. Prior to those final two offensive drives, USC’s fourth-down attempts all came on fourth-and-1. And beside one fourth-quarter run by Vavae Malepeai, those attempts all came in Arizona State territory.

But while Helton had mostly praise for the run game on Saturday, he did critique the fourth-and-short execution by the run game, which was stuffed by Arizona State three times.

Given USC’s new willingness to be aggressive in these situations, it’s an area the USC backs and offensive line will need to clean up.

“I’m always going to be aggressive. I believe in our offense,” Helton said. “I think it’s going to be one of the better ones in the country.”

One of the more surprising revelations from USC’s first depth chart released on Friday was that true freshman Parker Lewis had supplanted Chase McGrath as the starting place kicker on the roster.

Part of it, Helton explained, was McGrath dealing with knee and hip tendinitis. But even with that in consideration, Lewis won the job behind what Helton described an “extremely explosive leg.”

“Parker has been extremely productive in camp,” Helton said. “And sometimes that’s hard decisions, and Chase took it like a pro — said ‘Coach, I’m there for you, and I’ll be there for you if you need me.’ And he’ll continue to get better and get healthier, and hopefully that pain will go away. And like we always say, we’re always in competition.”

USC center Brett Neilon sprained his ankle in Saturday’s game, Helton said. His return timeline remains unclear, as Helton said the team will monitor his progress as they prepare for Arizona. If he can’t play, his likely replacement is Justin Dedich, who filled in for the final drives against ASU.

Defensive tackle Brandon Pili had surgery on Friday to insert pins to fix a broken middle finger, Helton said. Pili will be week-to-week to return from the injury.

2020-11-08
Previous Post: LAFC forced to settle for draw with Portland, finishes 7th in Western Conference standings
Next Post: UCLA football must regroup on and off the field before next game