Tove Lo visualizes her past of grappling with an eating disorder in the video for the song “Grapefruit,” which will appear on her new album, Dirt Femme, on Friday (Oct. 14). The clip is one of the first glimpses into the Swedish pop star’s traumatic past, which took her more than a decade to address in her own music.

Directed by Lisette Donkersloot, the video shows Tove Lo counting calories while sitting on a kitchen floor and metaphorically references the feeling of being trapped in one’s own skin.

“I’ve tried to write this song for over 10 years,” the singer wrote in a statement. “I know I haven’t talked about it a lot in interviews or even in my music which is my most honest place. I guess I had to find the right way to share the feelings and the vicious circle of behavior I was stuck in. I’ve been free from my ED and my body issues for a very long time but they did take up too many of my teenage years. I’m not sure why I wrote this song now. Maybe the two years of stillness brought back memories, maybe I needed all this time I’ve been free from it to be able to look back without feeling pain. 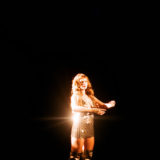 “One of the many feelings I remember is needing to crawl out of my own skin,” she continued. “I felt so trapped in a body I hated. I wanted a video that portrayed that, and Lisette and Toogie knew exactly how to create that with me. It was honestly really hard putting myself back in that headspace but it was necessary for me. I’m gonna let the song speak for itself now ”

Tove Lo previously released “2 Die 4,” “No One Dies From Love,” and “True Romance” from Dirt Femme. A European tour begins Oct. 29 in Dublin.