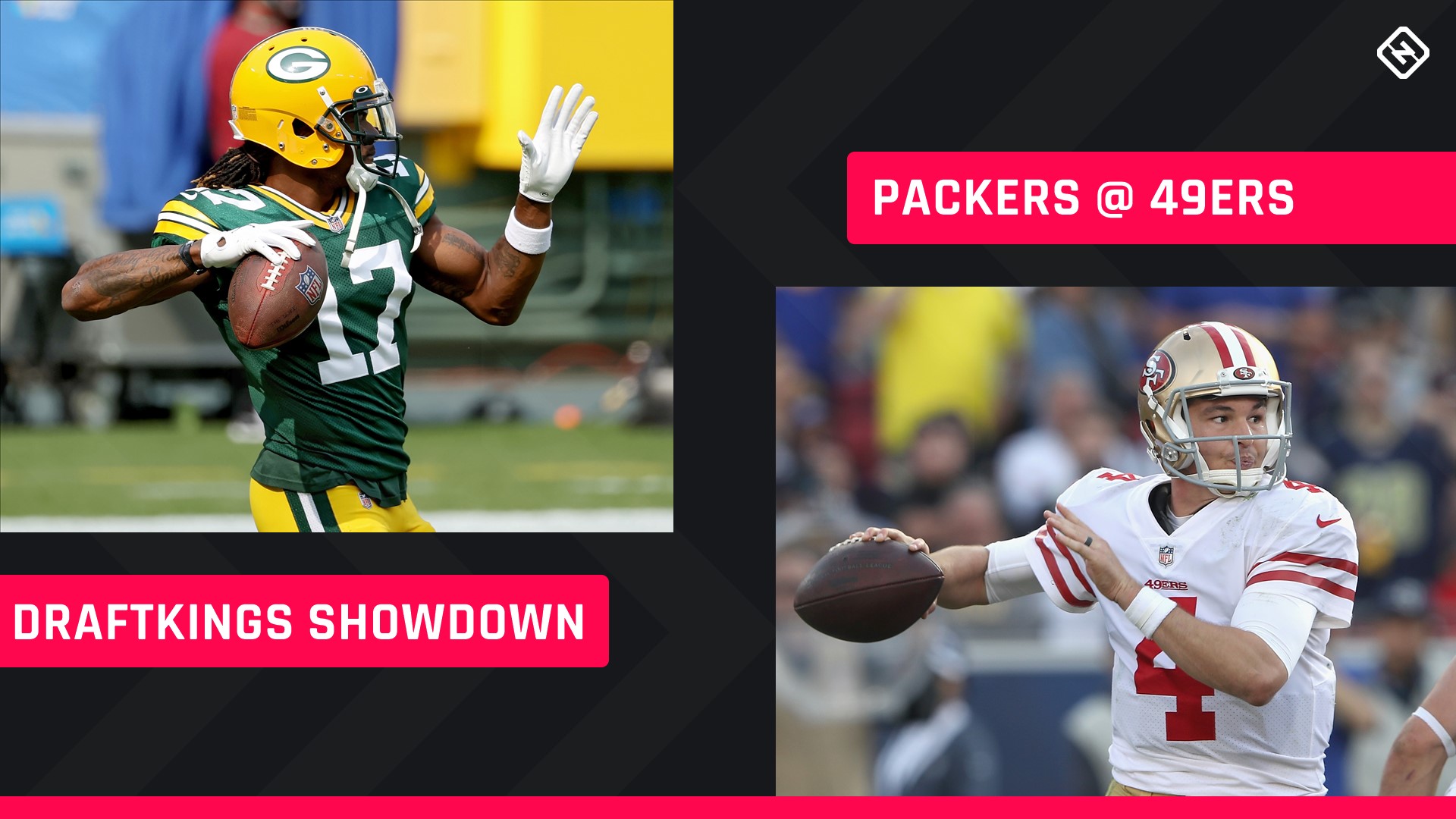 The Packers travel to San Francisco to take on the 49ers on Week 9’s Thursday Night Football, and the Packers will do so with a very injured/sick RB group of Aaron Jones (calf), AJ Dillon (COVID), and Jamaal Williams (close contact of Dillon). As unfortunate as that is for the Packers, it creates value opportunities when making picks for a TNF DraftKings Showdown lineup.

The Packers figure to give significant RB touches to Tyler Ervin and Dexter Williams. Of that duo, we’ve chosen to play Ervin, but we don’t even have to captain him. Injuries to Jimmy Garoppolo, George Kittle, Deebo Samuel, and Raheem Mostert have taken almost all the top-tier talent out of this game, meaning we can captain Davante Adams and still play a very good lineup.

MORE DK SHOWDOWN: How to win a Showdown contest

Adams has been making his case as the best WR in football for weeks now. Three straight weeks with double-digit targets lock in a solid production floor, and a Packers team with a dinged-up backfield will likely rely on Adams even more than usual, if that’s possible. In DK’s PPR scoring, he’s rightfully the top captain option on the slate.

Maybe someone, somewhere can make the case that Nick Mullens is worth playing in this game. Thanks to Brandon Aiyuk’s absence, we’ve had to deal with that reality as Mullens joins Rodgers. But the focus here is on making sure we have the future Hall of Famer, locking in Rodgers with Adams and getting the far superior QB from this game into our lineup.

This spot help Brandon Aiyuk before his placement on the COVID-19/reserve list. Now, it’s been begrudginly changed to Mullens. He’s not a bad quarterback, even though it’s not totally obvious who he’ll throw to. This game feels like it could go any number of ways, so maybe having both QBs is at least a bit of a safeguard.

Dalvin Cook scored four total touchdowns against the Packers on Sunday, torching Green Bay on the ground. No, Hasty isn’t Cook, but with Tevin Coleman (knee) likely out, it will be Hasty seeing around 15 carries against a very beatable run defense. He’ll pay off if that happens.

Playing Adams at captain requires a couple of value picks. The first is MVS. He looked like a new player early in the season but has come back down to earth. That doesn’t mean he’s not the most exciting player in this price range (certainly more so than the kickers). All it will take is one long reception to pay off this price.

If Aaron Jones (calf) is indeed out, Ervin will be the backfield starter, and at the very least, he’ll be on the field for every passing down in addition to getting some carries. Even if Jones plays, Ervin is a fun gadget player to use at minimum price because of his potential on screens and pop passes in a role that looks more like a wide receiver. Ervin could be used as a captain if Jones is out, but there’s not enough high-priced talent in this game to really stuff the lineup with studs anyway.