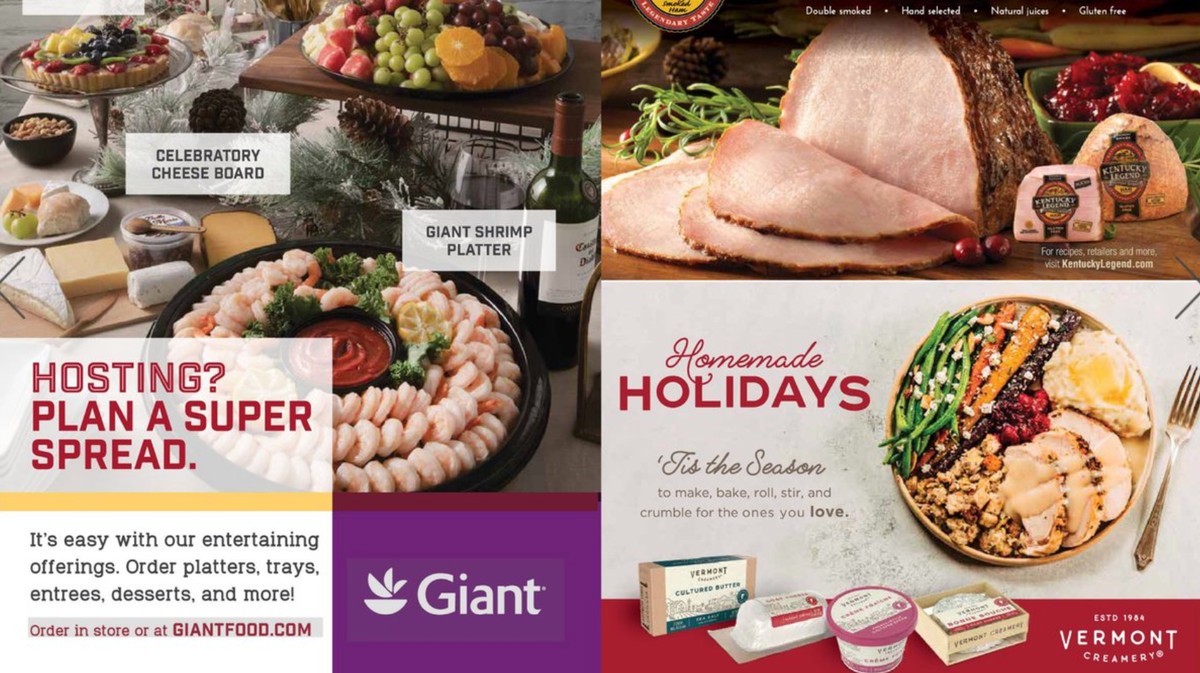 The December issue of Giant Foods’ Savory magazine is mostly what you’d expect from a supermarket chain’s in-house publication: it’s heavy on food-related features (“In Season Now: Potatoes”), thick with ads for its own products, and includes dozens of recipes for holiday cookies, cocktails, and cheese boards.

We’d never read an issue of Savory until today, and that would still be the case if it had used a different four-word combination on an ad for its prefab appetizer platters. “HOSTING?” it asked in all caps. “PLAN A SUPER SPREAD.” At a time when reasonable people are trying not to plan (or even inadvertently attend) anything remotely super spreader-ish, that copy got everyone’s attention.

As pics of the ‘SUPER SPREAD’ made their way around social media, Giant seemed to realize its mistake. “This did not come across as we intended,” it responded to one Twitter commenter. “This was an oversight on our team’s part, and we apologize. We wish you a safe and happy holiday season.”

In a statement to Washingtonian, the Maryland-based chain further apologized for the unfortunate phrasing. “We apologize for our advertisement in Savory which used the language Super Spread to describe an abundance of food,” a spokesperson for the company said.  “While, in hindsight, the choice of words was a poor one, Giant had no intentions of insensitivity. We continue to encourage people to practice safe social distancing practices for celebrating the holidays in line with CDC recommendations.”

In online versions of Savory, that ad has been swapped out for one that is more pandemic-sensitive. “This year, your crowd has to be smaller than years past,” it reads. “So pack your table with more celebration for everyone.”

Giant isn’t the first company to be called out for taglines that would’ve been completely unremarkable in the Before Times. In March, KFC received complaints for launching an ad campaign in the United Kingdom and Ireland based around its “Finger Lickin’ Good” slogan. The commercial, which was set to a Chopin piano piece, showed satisfied customers licking the chain’s proprietary combo of herbs and spices off their fingers—or off their friends’ fingers.

At the time, there were 459 confirmed positive cases of coronavirus in the U.K., and eight deaths had already been reported. Unsurprisingly, the spot was not well-received: The Drum reported that more than 160 people complained about the campaign—which also featured “Finger Lickin” ads on public transport—to the U.K.’s Advertising Standards Authority.

“It doesn’t feel like the right time to be airing this campaign, so we’ve decided to pause it for now—but we’re really proud of it and look forward to bringing it back at a later date,” a KFC spokesperson told the outlet, shortly after the ads were pulled.

A few weeks before that, Constellation Brands was criticized for promoting its new Corona Hard Seltzer with the slogan “Coming Ashore Soon.” Social media users complained that the ads were either distasteful or poorly timed (or both) considering that coronavirus was already becoming a serious health crisis.

“Our advertising with Corona is consistent with the campaign we have been running for the last 30 years and is based off strong consumer sentiment,” a brand spokesperson told CNBC at the time. “While we empathize with those who have been impacted by this virus and continue to monitor the situation, our consumers, by and large, understand there’s no linkage between the virus and our business.” (Corona’s “Coming Ashore” tweets have since been deleted.)

And just last month, Kraft ran a brief social media campaign for National Noodle Day that encouraged fans of powdered cheese product to #SendNoods to the friends and family they hadn’t been able to see in a while. Anyone who jumped on the promo could either mail a box of Kraft Mac & Cheese to the recipient of their choice, or they could snag a coupon that was good for a free box.

Despite the silliness of #SendNoods, people got big, big mad about it. “This is not OK. Don’t you realize that a huge portion of the people who actually eat your mac n’ cheese are children,” one commenter wrote. “Unacceptable!” another added.

Kraft deleted the references to the promo from its social media accounts, and posted an apology on its Instagram story. “The social promotion resulted in over 20,000 consumers across the country receiving boxes of America’s favorite Kraft Mac and Cheese,” it wrote, before adding that yeah, it had scrolled through all those angry comments too. “We sincerely appreciate and hear all of your feedback. The content will be removed from our channels.”

Given the way things are going with the pandemic—and the fact that we’re still a ways out from widely distributing those potential vaccines—these probably won’t be the last ad blunders. If we could still #SendNoods, we’d mail a couple of Kraft care packages to whoever’s in charge of big brands’ social media accounts.