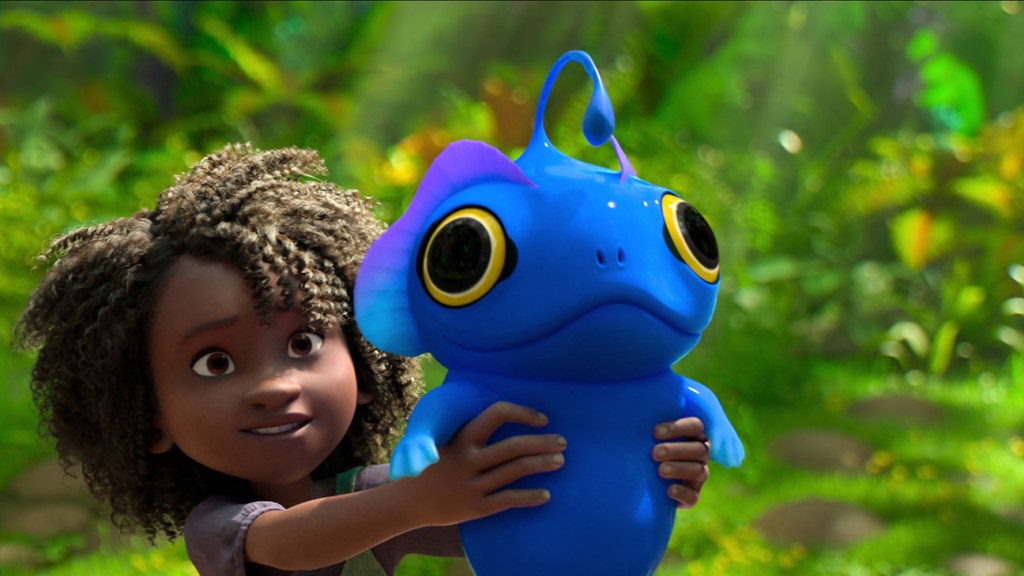 Maisie Brumble, the feisty protagonist of The Sea Beast, is a small girl with a gigantic personality and off-the-charts chutzpah. As the story opens she’s determined to claim her place in her seafaring country’s monster-hunting tradition; by the time it wraps, she’s turned that tradition inside out, in ways that are not only incisive and profound but deeply affecting. Chris Williams, whose helming credits include Big Hero 6 and Moana, has made a rousing, terrific-looking film, one whose emotional currents are all the more potent for being underplayed amidst the derring-do.

The frenetic busyness of the opening sequences might suggest we’re being lured into familiar, action-heavy animation territory. To be sure, there’s plenty of strong action, battles and otherwise, in The Sea Beast, along with leavening touches of the sweet and adorable. But as Maisie’s tale unfolds, the questions that she and the movie ask defy expectations. There’s a subversive edge to the film’s idealism as it aims its sights at war, greed and hypocrisy, leaving official lies dismantled and edifices crumbled and, crucially, making way for much better things.

Set in a world of fantastic creatures and tall-ships verisimilitude circa 1700, The Sea Beast weds cartoon stylization with striking photorealism. The rendering of water — the movie’s main milieu — is especially powerful, whether the filmmakers are capturing its surface roil and glitter or plunging into its tranquil depths. The skies have a breathtaking eloquence too, with fire, fog and candlelight effectively conjured as well. But through it all, character nuance is primary.

Eleven-year-old Maisie is brought to vivid life through the superb animation and newcomer Zaris-Angel Hator’s vibrant voice performance. Just as Maisie goes toe-to-toe with celebrated sailors and haughty aristocrats, the young actor more than holds her own with seasoned pros including Jared Harris and Marianne Jean-Baptiste.

Beyond the wider-scale themes at its core, the screenplay by Williams and Nell Benjamin concerns two orphans and their unlikely bond. The first is Maisie, whose monster-hunting parents perished in a fabled clash with giant ocean critters. The second is hunter Jacob Holland (Karl Urban), who also lost his parents at sea. The aftermath of their shipwreck and his rescue by Captain Crow (Harris) are captured with gripping intensity in the movie’s first, brief scene.

As Crow’s second in command, Jacob has become a legend, his swashbuckling adventures extolled in a book that Maisie reads aloud, with no shortage of dramatic flair, to her fellow orphanage dwellers. They’re a rapt audience, but Jacob’s heroics are more than a bedtime story for Maisie, who considers the sea her calling. Intent on serving at the famous warrior’s side, she sneaks out of the orphanage and stows away on his ship, the Inevitable, impressing Captain Crow and chagrining Jacob. First mate Sarah Sharpe (Jean-Baptiste) deals with Maisie’s intrusion with the same steely self-assurance she brings to everything.

Against the diverse spectrum of background figures who crew the vessel, an Ahab-type revenge saga comes into focus around the tough and weathered Captain Crow, whose face has the blunt, carved aspect of a ship’s figurehead. His nemesis isn’t a great white whale but the mighty Red Bluster, a humongous beast with a manatee-ish shape, a rhino-reminiscent horn, a wide mouth of incisors that recalls the animal faces in How to Train Your Dragon, and expressive yellow feline eyes. It’s been 30 years since Crow lost one of his own eyes in an encounter with the Bluster. Now, if can achieve his mission of vanquishing the beast, he plans to retire and hand over the helm to Jacob.

Notwithstanding Jacob’s renown, swagger and pep talks to the crew about the glory of the hunter’s life, his ambivalence creeps into nearly every exchange. The father-son dynamic between him and the captain comes with a presumption about his purpose in life, something that Maisie’s presence forces him to examine. Late in the story, when Jacob and Maisie have withstood countless perils on sea and on land, her suggestion that they team up permanently, like a family — and the way he pushes it away — compresses two inner lives into a few concise lines, played to perfection by Urban and Hator.

In a similar vein, Sarah Sharpe’s vulnerability breaks through her soldierly shell when Maisie needs her urgent help. And you don’t have to dig far beneath Captain Crow’s combativeness to see a man deflated by an unfulfilled mission and a sense of mortality — or at least the end of his career.

Captain Crow’s final mission pits the Inevitable against the Imperator, a megaship designed to make old-school hunters like Crow and Jacob obsolete. Gilded to the gills, with guns by the dozen, it’s a ridiculous monument to overkill, helmed by the snooty Admiral Hornagold (Dan Stevens) as he climbs deeper into the favor of the King (Jim Carter) and Queen (Doon Mackichan) and leads their war on the Red Bluster and all the beasts of the sea.

Separated from Crow’s ship for much of the film, Jacob and Maisie encounter a number of those beasts, among them a giant purple crab. Blue, a puppyish little creature with a quail’s plume, turns out to be not just a fun sidekick but a loyal friend, as well as a reminder that every so-called monster was once a cute baby.

The Sea Beast has more on its mind than make-believe, though. Maisie’s big-picture questions enter the story a little more than halfway through, shifting the emphasis, stirring up healthy doubt and ultimately touching on such matters as scapegoating and war profiteering. Heavy stuff, and yet Williams maintains the flow of visual delights and banter, never losing sight of fearless Maisie and conflicted Jacob, or of how these two orphaned souls connect.

All the action, whether suspenseful, moody, silly or tender, is subtly boosted by Mark Mancina’s score. A shanty whose murderous lyrics are belted out with comic glee goes to the heart of this heady mix of Moby-Dick, the Book of Jonah, Kong vs. Godzilla and countless tales of vaunted heroes: How much do we really see and hear what’s around us? As Maisie, who proves a consummate navigator of the unanticipated, tells Jacob: “The world is wide. And you don’t know everything.”