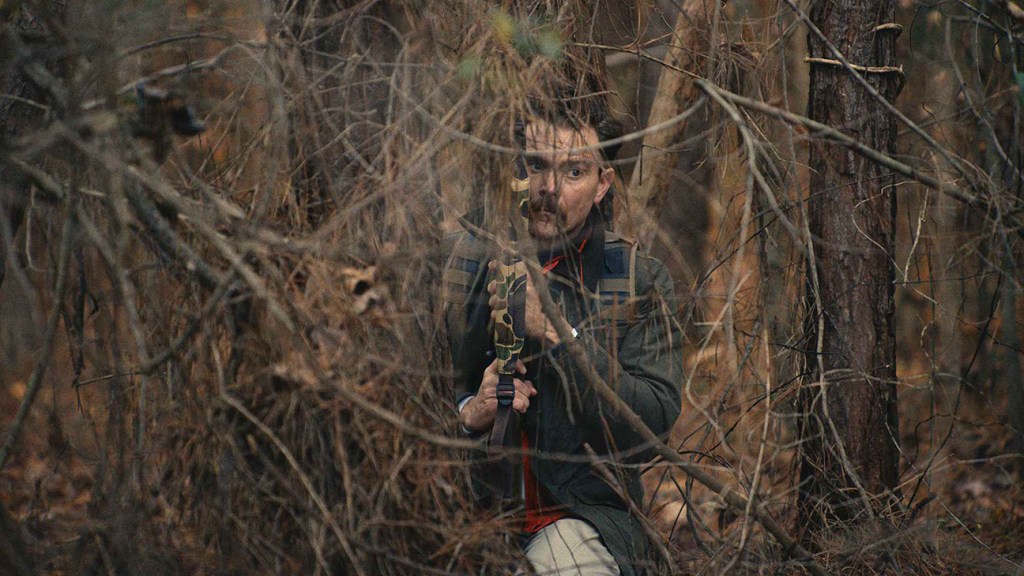 Continuing the brooding examination of men put to the test that they began in The Killing of Two Lovers, writer-director Robert Machoian and lead actor Clayne Crawford reteam on The Integrity of Joseph Chambers, a morality tale in which the threat to the protagonist’s family this time is the direct result of his own actions. The new film doesn’t match the tightly wound narrative complexity or power of its predecessor; nor does it escape the occasional feel of actor-y self-indulgence. But the artistic rigor of the undertaking remains striking, as does the invaluable contribution of Danish sound designer Peter Albrechtsen in sculpting the disquieting atmosphere.

No less important is the work of cinematographer Oscar Ignacio Jiménez, who made such an evocative setting of wintry Utah in The Killing of Two Lovers and does so again here with woodsy Alabama, captured in a predominance of wide shots that expressively place Crawford’s title character alone in a threatening wilderness.

The Integrity of Joseph Chambers

The Bottom Line Thin but compelling.

Crawford hails from that part of the country, and far more than his first collaboration with the director, this one seems transparently designed as an actor’s showcase more than a multidimensional drama. In addition to producing with his wife, Crawford takes wardrobe and set design credits and casts his own sons, indicating a personal desire to explore the nebulous corners of the male psyche.

Like the earlier film, this one features a script stripped down to its bones, chronicling the events of a single day. Joseph wakes well before dawn and prepares to head out and go deer hunting. His wife Tess (Jordana Brewster) voices her concern that he’s too inexperienced for a solo hunting trip, urging him to wait until their friend Doug (Carl Kennedy) is free to accompany him. But Joseph is stubbornly prideful.

He and Tess have recently relocated to her native Pell City in the foothills of the Appalachians, intending to raise their two boys in a safe place away from city influences. He sells insurance, but has it in his head that he needs to be able to provide for his family in case the world falls apart — whether that means economic or climate collapse or some other form of societal chaos is unclear. Even the handlebar mustache that remains after Joseph shaves off his beard at the start of the movie implies that he’s trying on a more masculine persona in keeping with the new environment.

Doug also discourages Joseph from going, but nonetheless lends him his truck and rifle. Joseph drives out to a private property licensed for hunting and treks through the woods, finding various places to sit and wait but showing little of the patience and stillness required of a deer hunter. Even his clumsiness loading the rifle pegs him as an under-prepared novice.

Albrechtsen layers discordant ambient groans and shudders and creaks with the elemental noise of bugs, birds, animals, trees in the wind and branches cracking underfoot, together with snatches of William Ryan Fritch’s somber orchestral score. That jagged soundscape, along with the anxious notes of the setup and countless stories of hunting accidents throughout American film and literature, signals disaster.

Joseph’s boredom provides a reprieve, during which he sings about being king of the mountains, imagines a baseball game in which he’s the star player and skims rocks in the river. But the inevitable happens, when he finally spots a deer, goes chasing after it and then whirls around and fires blindly as he’s startled by a noise behind him.

That single unplanned action, just a moment in Joseph’s life, instantly changes everything, and his fantasy of himself as a rugged survivalist comes crashing down. Machoian lingers too long on the protagonist’s stunned reaction — freak-out, panic, nausea, tears, anger — blurring the line between the character’s shattered state and Crawford flexing his acting muscles in an extended improv exercise of a man in extremis. But the film becomes more interesting when Joseph goes into frantic damage-control mode.

This involves him veering between muttering justifications for his actions and reminding himself it was an accident, before making a decision to cover up the evidence. But he’s startled by other developments that heighten his dilemma while also bringing judgment upon him as a phony who doesn’t belong there, with his catalogue-bought hunting clothes. In the long central stretch played largely as a one-man show, Joseph is brought face to face with his inadequacies as a man.

The film’s dramatic impact will depend on how much you remain invested in Joseph’s moral crisis, which subtly echoes the more existential crisis of a man who knows how to do nothing but sell insurance, perhaps a worthless commodity in a world heading toward catastrophe. It’s a scenario that seems more suited to a short story format than a narrative feature, and I found it a bit thin compared to the continually evolving stakes and sustained emotional gut punch of The Killing of Two Lovers.

But Crawford’s commitment is impressive. Joseph returns home, saying nothing to his wife and kids though clearly shaken to his core. Machoian then flips the action back to the woods to reveal events from earlier in the day, expanding the frame to show Joseph’s interactions with a local police chief played by Jeffrey Dean Morgan in a final scene that concludes with abrupt ambiguousness.

The Integrity of Joseph Chambers is mildly disappointing after the visceral wallop of the director and lead actor’s last collaboration. But it remains raw and distinctive, carried almost entirely on Crawford’s shoulders. What’s more notable, however, is the attention to sound and its descriptive uses — to seed dread, to explore the subconscious and probe the dark, frightened recesses of a mind in torment.