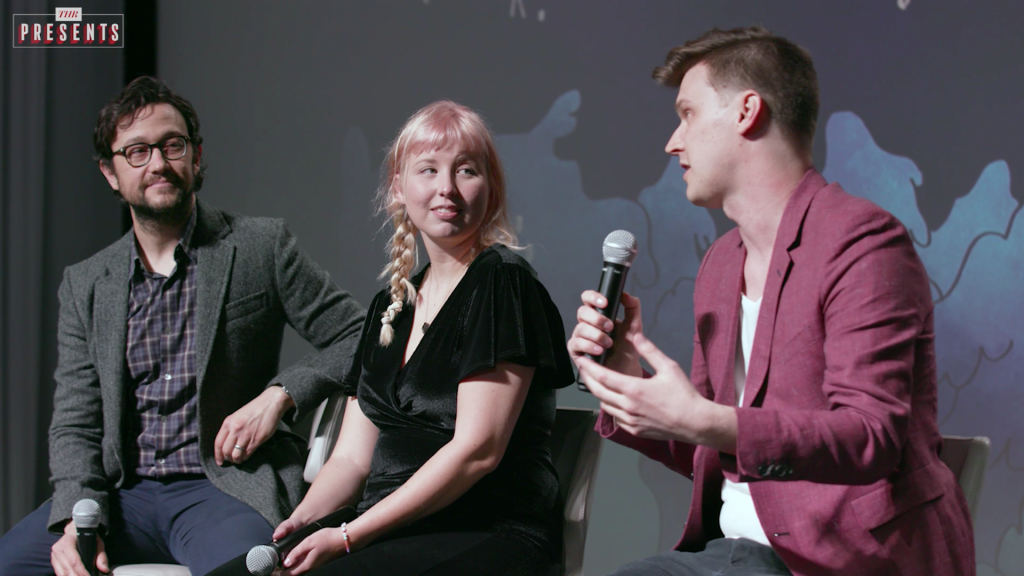 This story was produced in paid partnership with Canon.

Canon and The Hollywood Reporter hosted an exclusive premiere of The Forest Haunt, a heartwarming animated short from Joseph Gordon-Levitt’s HitRecord and Canon, on April 28 at The Ross House in the Hollywood Hills.

In making the short, the filmmakers participated in a virtual writers room powered by Canon’s inventive new AMLOS (Activate My Line of Sight) remote working system, which is rolling out this summer. Gordon-Levitt, who served as exec producer and narrator; Edward Jesse, director (along with Toff Mazery) and exec producer; and Natalie Andrewson, lead illustrator and designer talked about how they used AMLOS during a panel discussion following the screening.

Combining a Canon 4K PTZ camera and new software, AMLOS was used over three days in January by the filmmakers in Los Angeles, connected to a writers room at CES in Las Vegas and additional remote participants, allowing them to see each other, the whiteboard and other visuals in the meeting. With the system, the filmmakers used hand gestures to control these visuals. “It turned out great, a lot of ideas were coming in,” said Jesse. “As soon as people are given the opportunity, they embrace it.”

“It just made it kind of fluid,” said Gordon-Levitt of the creative process using AMLOS. “And when you eliminate friction, when you make the creative process more fluid, then the creativity obviously flows more easily and more ideas come, and it’s just more fun. And when you’re having more fun, then you make something that’s more fun for people to watch. So, it just kind of seamlessly and easily made it that much more fluid and fun to work together.”

Of using AMLOS, Andrewson noted, “It was great to be able to see all the visual assets really quickly and be able to zoom in on them, seeing what Toff and Edward had made that room and then experiencing all of the stuff that was coming in on the chat and also at the event itself, it was great to see all of that together. And then to be able to reference those high-res images, and then also get the energy as well. I think that the energy of the event was really important.”

Introducing the animated short and program was Canon’s Kohei Maeda, a self-proclaimed “huge movie fan” and developer of AMLOS. “Canon’s role has always been to enable people to share their creativity with imaging technology. A few years ago, we set the goal of bringing that vision to the hybrid workspace to make it more productive, by making it more natural, more human. The result is the AMLOS system,” he said. “Creative writers rooms are famous for having kinetic brainstorm energy, so if we could translate that to the hybrid space, that would be the ultimate success.”

“He’s a film buff. I don’t know how many product launches for an electronic device referenced the Lumiere brothers,” said Gordon-Levitt of the creative-drive from Maeda and the Canon team. “I love this about this partnership, and you can really see it evidenced in what they’ve made. Not all advancements in technology are coming from that place for a real love of the art. And you can see throughout history that technology, when it advances, it always has huge impact on the creative process.”