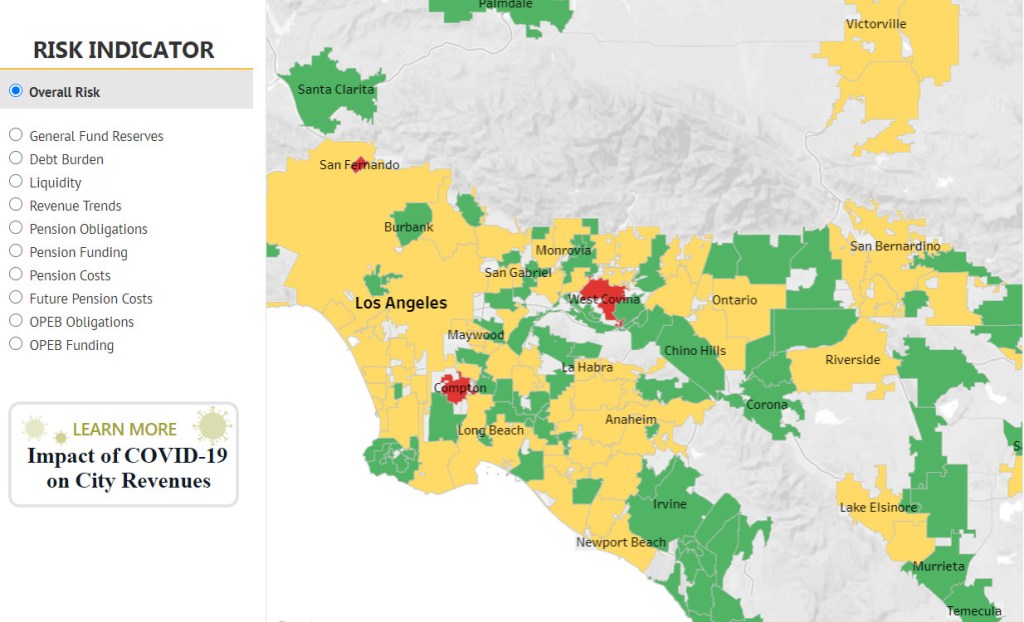 The financial situation of cities around California generally seemed to be improving over the last few years, but the coronavirus pandemic has likely thrown a big wrench into their progress, according to new data from State Auditor Elaine Howle’s office.

The auditor on Wednesday, Nov. 18, released an update to a dashboard of cities’ fiscal information that includes rankings of their financial health. First launched last year, the dashboard evaluates cities on criteria including how much they owe toward employee pensions and other debt, revenue trends and how much cash they have in reserve.

The dashboard’s goal is to provide transparency for everyone, showing cities a full analysis of their financial situation and how it’s changed over time, and also giving residents the impetus to start a conversation with city leaders about how to fix concerns before they become a crisis, said Margarita Fernandez, the auditor’s chief of public affairs.

The rankings are derived from audited financial reports cities submit to the state, and the newly released numbers reflect reports through fiscal year 2018-19.

The big takeaway from the new data is “the number of high risk cities has declined,” from 18 cities based on the 2016-17 reports used last year to nine cities for 2018-19, Deputy State Auditor Mike Tilden said, adding that it wasn’t a surprise because the economy did well and unemployment was low during that time.

Among the Southern California cities the state ranked as having the worst financial health were San Fernando, West Covina and Torrance, placing 7th, 9th and 10th, respectively, out of 453 cities. La Habra, which last year disputed its ranking as 18th worst, plunged to the 81st spot in the update.

San Fernando officials said Wednesday they were already aware of the challenges the state auditor highlights in the dashboard, but Deputy City Manager Tim Hou noted that it includes an inaccurately low amount of cash and investments, “which would probably pretty significantly change where we fall in their scoring.”

Hou also noted that earlier this month, San Fernando residents voted to increase city sales tax by a quarter cent to shore up the city’s finances.

West Covina, which is the subject of a state audit to be released in December, is already taking steps to address its poor fiscal health, which is largely due to pension obligations, City Manager David Carmany said.

The city recently refinanced its pension debt to get a lower interest rate, Carmany said, and officials are working with city employees on how to reduce future pension costs.

Torrance also has issued bonds to help pay down pension debt, and while the state report may sound alarming, the city has generally “taken measures to put us on the long-term path to success,” City Manager Aram Chaparyan said.

Along with the dashboard update, the auditor also looked ahead at the potential impact of the pandemic on cities’ fiscal health and concluded that Anaheim is in danger of exhausting its reserve funds to cover the loss of tourism revenue.

Anaheim spokesman Mike Lyster said the city started this fiscal year with about $40 million in reserve and has had to spend much of that, with the two theme parks and convention center shuttered for the past nine months. But big revenue-producing investments – including mixed-use developments around the Honda Center and Angel Stadium – are on the horizon in the next few years, he said.

“We will see short-term pain, there is no doubt about that, but our city will survive,” Lyster said.

The state dashboard and rankings of cities’ fiscal health are at auditor.ca.gov.

2020-11-18
Previous Post: Warriors draft rumors: What will Golden State do with No. 2 pick in 2020 NBA Draft?
Next Post: Port of LA breaks another cargo record, but challenges have emerged