The Smashing Pumpkins will release their next album, a three-act rock opera dubbed ATUM (pronounced “autumn”), in three different installments over the next five months, and are previewing the 33-track project with “Beguiled,” which is out now. The Pumpkins gave fans a preview of “Beguiled” earlier on Tuesday when they took to TikTok to perform it live.

Frontman Billy Corgan wrote and produced ATUM over the past four years, and envisioned the album as a sequel to the band’s 1995 album Mellon Collie and the Infinite Sadness and the 2000 effort Machina/The Machines of God. ATUM is broken into three separate 11-song installments: act one is out Nov. 15, act two on Jan. 31, 2023 and act three on April 21, 2023. Fans can also pre-order a special boxed set with all 33 tracks plus 10 additional unreleased songs.

Each of ATUM‘s tracks will be revealed chronologically every week via a newly announced Corgan podcast series, Thirty-Three with William Patrick Corgan. The first two episodes are available now via the band’s website and feature the new songs “Atum” and “Butterfly Suite.” 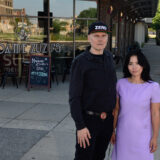 The Pumpkins are gearing up for a 32-date North American arena tour in tandem with Jane’s Addiction, which kicks off on Oct. 2 in Dallas. The group is also playing small venue shows this week in Chicago and New York to celebrate the launch of ATUM.

2022-09-19
Previous Post: These Randy’s Donuts sunnies are the coolest piece of L.A. food merch we’ve seen in a while
Next Post: Luang Prabang Film Festival to Make Post-COVID Comeback in December