SeeYouSpaceCowboy and If I Die First join forces for “bloodstainedeyes”

SeeYouSpaceCowboy and If I Die First are teaming up for a truly epic collaboration. The hardcore bands are gearing up to release a split five-track EP A Sure Disaster, which includes the new single “bloodstainedeyes.”

On March 30, SeeYouSpaceCowboy and If I Die First dropped a brutal video for the new track, which offers a taste of what’s to come from the A Sure Disaster EP.

For both of these bands, “bloodstainedeyes” marks their first release of 2021. If I Die First which is made up of emo trap artists Lil Lotus and Lil Zubin, From First To Last guitarist Travis Richter and producer Nedarb, put out their debut EP My Poison Arms in July 2020. From First To Last drummer Derek Bloom joined the project after the EP’s release and appears on the band’s new recordings.

Meanwhile, self-proclaimed “sasscore” outfit SeeYouSpaceCowboy dropped their latest full-length album The Correlation Between Entrance And Exit Wounds via Pure Noise back in September 2019.

Both acts knew they wanted to eventually collaborate together in some capacity due to their friendship and similar music style. However, as SeeYouSpaceCowboy vocalist Connie Sgarbossa exclusively tells Alternative Press, she wanted the bands to do more than just a split EP of their own songs. As a result, the two acts came together to create the fierce new track “bloodstainedeyes.”

“It was pretty apparent that both bands wanted to do a split together because of the friendship we had. I really wanted to do a collab song as opposed to just featuring on each other’s songs,” Sgarbossa says. “It was a really interesting and fun process figuring out how to meld both band’s styles together. And [also] coordinate having like four vocalists on a track. We basically got together, stuffed eight people in my apartment for days, destroyed it and somehow got a song and video out of it.”

“bloodstainedeyes” takes the most distinctive qualities of each band and merges them together seamlessly, creating a brutal track that will attract post-hardcore and metalcore fans alike. As a result, the genre-blending song will resonate with listeners of both SeeYouSpaceCowboy and If I Die First, a standard that will likely be heard throughout the A Sure Disaster EP.

For the intense “bloodstainedeyes” video, SeeYouSpaceCowboy and If I Die First find themselves in very close quarters. Eventually, blood begins to pour as they all take their aggression out on each other. From black eyes to bloody noses and red knuckles, no one was left unscathed. Ultimately, the video’s harsh imagery represents the immense emotions that inspired the songs on this upcoming split EP.

If I Die First clean vocalist Zubin adds that this new collection of tracks turned into something bigger than originally expected. For Zubin, getting the chance to collaborate with a group of friends on new music was both refreshing and needed.

“This became so much more than just a split for me,” Zubin says in a press release. “During such dark and uncertain times, it was hard to find a light to stay inspired. This project sparked that. Getting together, feeding off each other’s energies, laughing, the whole process kept me sane. We wrote songs that I am extremely proud of and we also gained life long friends.”

Similarly, If I Die First guitarist Nedarb believes the A Sure Disaster EP further represents the love each band have for the music they create.

“This split means a lot to me,” Nedarb says in a press release. “It’s two bands that share the same passion and everyone’s energy vibes off each other perfectly. I hope everyone enjoys the project as much as we do.”

The A Sure Disaster EP arrives May 14 via Pure Noise Records, and preorders are available here. 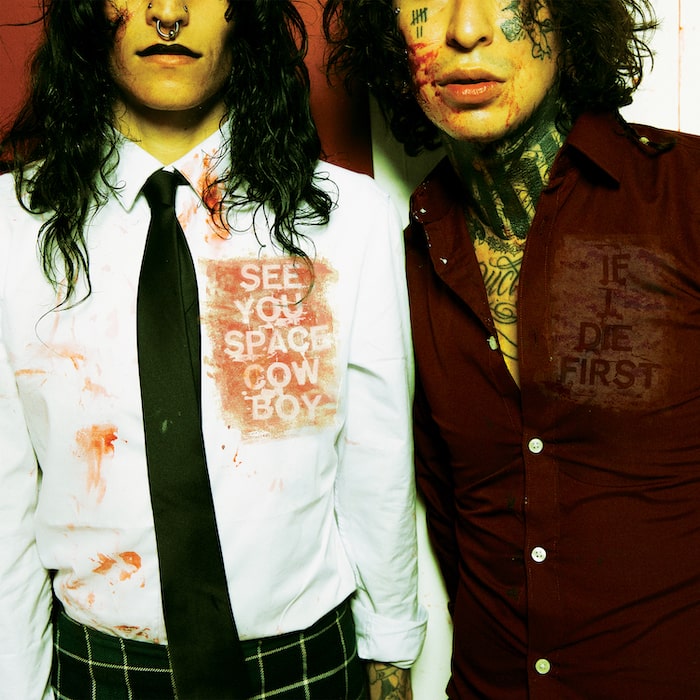 A Sure Disaster tracklisting

SeeYouSpaceCowboy and If I Die First are among the diverse group of artists featured in Alternative Press’ 100 Artists You Need To Know issue. The extensive list includes an array of acts that are redefining landscapes in genres across the music industry. From alt-rock to metal, indie and punk, the mighty set of talented musicians includes Maggie Lindemann, Rina Sawayama, Bad Omens and Chase Atlantic among others.

What are your reactions to SeeYouSpaceCowboy and If I Die First’s intense new single “bloodstainedeyes”? Let us know in the comments below.

2021-03-30
Previous Post: Los Angeles County has been moved into California’s orange tier
Next Post: HARD Summer is coming back with Future, DJ Snake and Dillon Francis atop the lineup