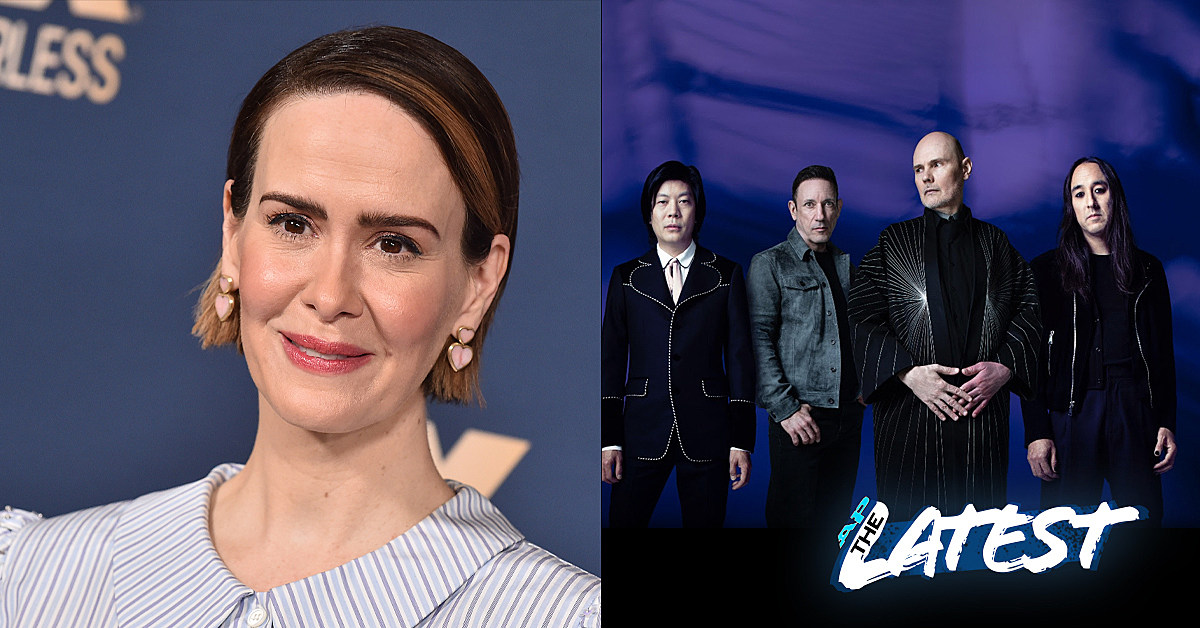 Known for her many show-stopping character roles in American Horror Story, those of which we previously ranked, Sarah Paulson is set to take on yet another massive role when she portrays Gwen Shamblin, the cult leader and founder of the Weigh Down Workshop. In September 2021, HBO Max unleashed the docuseries The Way Down: God, Greed, and the Cult of Gwen Shamblin, exposing the dark and disturbing history behind the Remnant Fellowship Church. Now, Paulson will take on Shamblin’s charismatic disposition and big-haired cult leader ambitions. Watch the docuseries trailer below for a preview of what Paulson’s getting herself into. —Anissa Sanchez

The Smashing Pumpkins have released “Beguiled” ahead of their upcoming three-act rock opera, Atum. “Beguiled” is just one of 33 tracks on the new record, which also serve as a companion piece to the band’s classic concept albums Mellon Collie And The Infinite Sadness (1995) and Machina/The Machines Of God (2020). With something as ambitious as a rock opera, the Pumpkins are sure to provide an epic sonic journey with their 12th studio album, and “Beguiled” showcases a more prog-metal-inspired sound that’s a striking but welcome deviation from their alt-rock roots. Fans can witness the live debut of “Beguiled” this Friday, Sept. 23, as the band are set to perform on The Tonight Showing Starring Jimmy Fallon. —Alessandro DeCaro

Sudan Archives makes her TV debut with a visionary performance

Earlier this month, Sudan Archives unveiled her masterful new album Natural Brown Prom Queen. Now, she’s making her late-night TV debut on Stephen Colbert’s Late Show with “Selfish Soul.” In the music video, Archives flexes by playing a violin upside down, and she raises the ante with her visionary performance, which features a trio of backup singers, a bassist and Archives ripping on her stringed instrument, all clad in black. Witness her magic below. —Neville Hardman

White Lung are giving us one final album, Premonition

While we’re gutted to learn that White Lung’s long-awaited fifth studio album Premonition will be their last, the band seem ready to go out with a bang. Sharing two new singles, “Date Night” and “Tomorrow,” White Lung have reemerged as energized as ever with their signature blend of blast beats, angular guitar riffs and Mish Barber-Way’s dynamic vocal style. Additionally, the band have shared visually stimulating and abstract videos for both singles, which were directed by close friend and visual collaborator Justin Gradin. Premonition, which arrives Dec. 2, finds the band rejecting and making peace with the idea of nihilism while also shedding light on the events that have transpired not only within society over the last five years but also within their personal lives, including the birth of Barber-Way’s two children. —Alessandro DeCaro

2022-09-20
Previous Post: How the Driver Era made an album full of lust and longing
Next Post: Megan Thee Stallion, Kendrick Lamar and WILLOW Announced as First Musical Guests of SNL Season 48