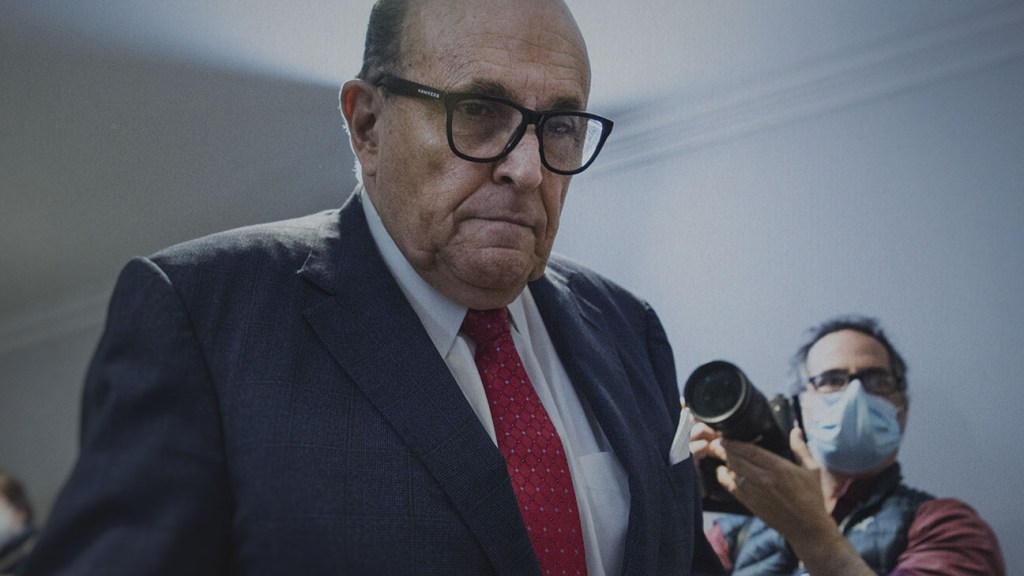 You can understand why filmmaker Jed Rothstein didn’t want to make a traditional documentary about Rudy Giuliani, whose life and career haven’t exactly been starved for attention. Rothstein’s conceit was to supplement the traditional mixture of archival footage and interviews with scenes from an imagined Broadway-style musical about Giuliani. That may have been a mistake, since the results play more like a standard cable television doc inexplicably accompanied by excerpts from a fringe festival theatrical production.

Nonetheless, Rudy! A Documusical, receiving its world premiere at the Tribeca Film Festival, proves fascinating. How could it not, considering the utterly bizarre downward trajectory of its subject’s reputation? Although in Giuliani’s case, a Broadway musical seems less appropriate than Greek tragedy. Or maybe a horror film, since the older he gets the more he bears a striking resemblance to Nosferatu.

The Bottom Line A scary enough tale without the musical numbers.

The film includes extensive interviews with two knowledgeable sources: journalist Andrew Kirtzman, author of Rudy Giuliani: Emperor of the City, who’s been covering Giuliani for decades; and Ken Frydman, a former advisor who served as his press secretary during his first successful mayoral run. Not surprisingly, neither has much good to say, although Kirtzman acknowledges how Giuliani rose to the occasion after the 9/11 attacks and Frydman seems to indicate that the current Giuliani bears little resemblance to the man for whom he once worked. Guiliani didn’t even drink or smoke cigars in those days, Frydman points out in amazement.

The film makes a strong case, however, that the current Giuliani, although seemingly more deranged, is not that far removed from the U.S. Attorney for the Southern District of New York who went after the Mafia with a vengeance or the authoritarian-leaning mayor who professed to be a paragon of virtue while conducting multiple extramarital affairs. “He liked being fought over,” Frydman says.

After losing his first mayoral race to David Dinkins in 1989, Giuliani won four years later, using many of the tactics he would employ in the service of Donald Trump. The footage of him yelling “Let’s have trial by combat!” during the Jan. 6 rally is more than familiar, but only those with longer memories will recall his incitement of police officers during a speech decades earlier that resulted in many of them drunkenly rioting at City Hall. The documentary vividly illustrates how he stoked racial tensions to inflame a city then wracked by crime. In a shameless power grab, he also attempted to extend his final mayoral term by three months, claiming that it would be good for the city.

We hear from such Giuliani associates as former NYC Police Commissioner William Bratton and former FDNY Commissioner Thomas Van Essen, but their relatively innocuous comments pale in impact to the harsh criticisms of Giuliani’s mayoral tenure by Al Sharpton and Carl McCall; the withering comments by journalist Olivia Nuzzi; and the observations of forensic psychiatrist Dr. Bandy X. Lee (editor of The Dangerous Case of Donald Trump), who offers disturbing diagnoses of not only Giuliani but also Trump and his loyal followers who stormed the Capital.

Giuliani became “America’s Mayor” after 9/11 and for a while enjoyed such popularity that he received nearly every honor imaginable, including being knighted by Queen Elizabeth. But he once again squandered his reputation through his shameless business pursuits, including representing Perdue Pharma and serving as a security consultant to various foreign dictatorial governments. His 2008 bid for the presidency was a fast flop.

There’s nothing particularly revelatory in the film, and the inclusion of such recent incidents as his humiliating press conference at the Four Seasons (the landscaping company, not the hotel), while probably necessary, at this point feels redundant. The mock musical numbers commenting on the action, although clever and amusingly staged, don’t really add very much either, and it’s a relief when the device is used less often as the film goes on.

Nonetheless, Rudy! A Documusical delivers an insightful portrait of a man who has truly lost his way, resulting in tremendous damage not only to himself but to the entire country. Early in the film, we hear Giuliani discussing his lifelong love of opera. “I think it saved me an enormous amount of money in psychiatric bills,” he declares. It seems safe to say that he would have been better off making the financial investment.