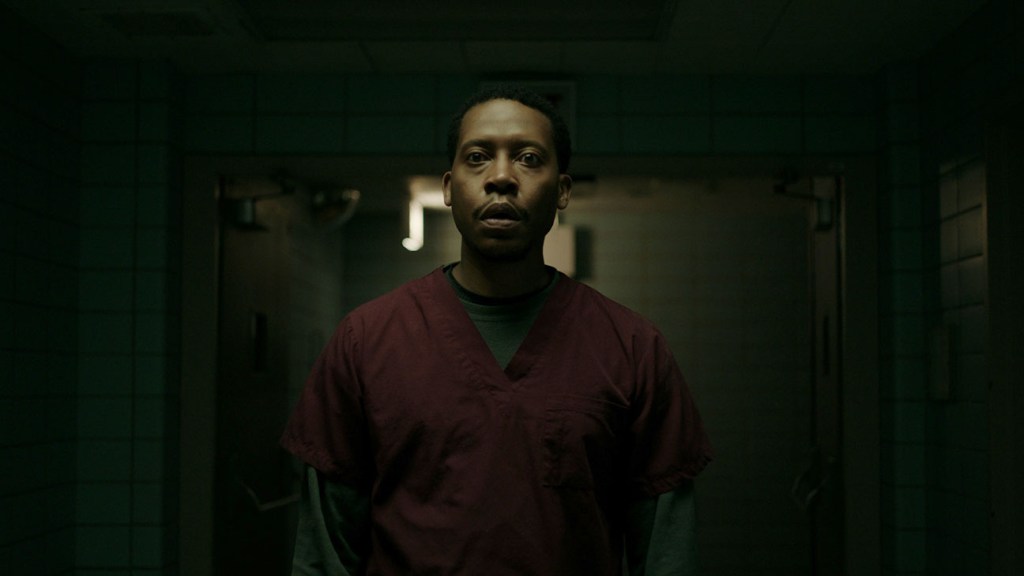 When medical resident James (Namir Smallwood) is assigned an acting class to improve his bedside manner, he bristles at the idea, describing it as “dishonest.” The teacher (David Cromer) gently pushes back. “Don’t your patients lie sometimes?” he asks. “They might,” James replies. “Their bodies usually don’t.”

The irony is that James will spend the bulk of Rounding obsessed with the idea that one specific body might be, if not lying, at least telling less than a complete truth — all while his own body betrays the fictions he tells himself, namely that he’s totally fine and in control. Those tensions make for a tense, occasionally terrifying thriller that’s hard to look away from, though what it’s ultimately trying to accomplish with all that energy isn’t always so clear.

The Bottom Line A tense, occasionally terrifying portrait of trauma and stress.

Rounding opens with what will turn out to be one of the most traumatic moments of James’ life, as he grants a favorite patient (Cheryl Lynn Bruce) the assisted suicide she insists she wants — only for her to change her mind seconds too late, crashing from a heart attack as James collapses under the emotional weight of what he’s done. Months later, still unable to move on, James secures a transfer to a small rural hospital in hopes of finally getting his fresh start.

At first, it looks like just the change he needed: He’s exercising again, and seemingly relishing the crisp, snowy air. He’s impressing his new boss (a very grounded Michael Potts) with his ambition and expertise, and he’s getting along with his new coworkers (including Saint Frances‘ Max Lipchitz and Kelly O’Sullivan).

But when 19-year-old Helen (Never Rarely Sometimes Always‘ Sidney Flanigan) is admitted with a severe asthma attack, James notices her symptoms don’t add up. His confusion gives way to uneasiness and eventually full-blown obsession, especially once Helen’s mother (Rebecca Spence) starts pushing back on his fixation.

Director Alex Thompson (Saint Frances), who also wrote the script with Christopher Thompson, uses his eye for detail to bring the viewer into James’ rapidly deteriorating mental space. It’s acknowledged that residency is a challenging time for any doctor, and all around James we see others also guzzling coffee or fretting over heart-rending cases.

But montages of James’ already stressful workday are made even more hectic with a ragged, relentless pacing that refuses to let him, or us, catch a breath. Violent dreams (or perhaps hallucinations) begin chasing him down dim hallways and snowy roads. Painful memories intrude in flashes, until so many of them pile up at once that the present becomes difficult to see. In its creepiest moments, the film recalls the sick desperation of 2021’s Saint Maud.

James spends his lunch breaks frowning over charts instead of eating, and seems to sleep only when he dozes off by accident, coming to hours or maybe days later in a disoriented state. When James injures his foot, he keeps walking on it anyway, trying to ignore pain that grows so intolerable, he can’t put on socks without gasping. What appeared at first like an admirable dedication to his job reveals itself as more akin to self-flagellation or self-punishment. The people around him pick up on his intensity, and ask in increasingly urgent tones if he’s okay. He always insists he is, and he’s less convincing each time. Smallwood’s performance alternates between white-knuckle jitters and dead-eyed exhaustion, giving the impression of a man stretched so tight, a wrong breath might snap him for good.

No matter how much he struggles, James is unable to let go of the nagging feeling that something simply isn’t right about Helen’s story. In its structure, James’ arc isn’t so different from that of the over-invested homicide detective who sacrifices everything he has and crosses every boundary to pursue a case, and who discovers that in trying to catch a monster he’s become a bit of one himself. Rounding does by the end offer him, and us, the satisfaction of resolving the narrative’s core questions — of what’s really happening to Helen, and of what happened to James in the past to leave him so profoundly shaken.

But if Rounding is crystal-clear in its details, its larger picture remains murkier than it should. After all the answers, it’s still difficult to tell what we’re meant to make of them: that medicine is a harrowing field? That unbearable stress will make a person do bizarre things? That humans are more complicated than their charts could possibly hope to show? It’s the one mystery not even James seems determined enough to solve. As an experience of one man becoming completely unglued under pressure, though, Rounding makes for a wild, unsettlingly convincing ride.

2022-06-17
Previous Post: From ‘Definitely, Maybe’ to ‘Beautiful Boy’: 14 Movies for Dads and Their Kids to Watch on Father’s Day
Next Post: YUNGBLUD, Z2 Comics announce Twisted Tales Of The Ritalin Club 3