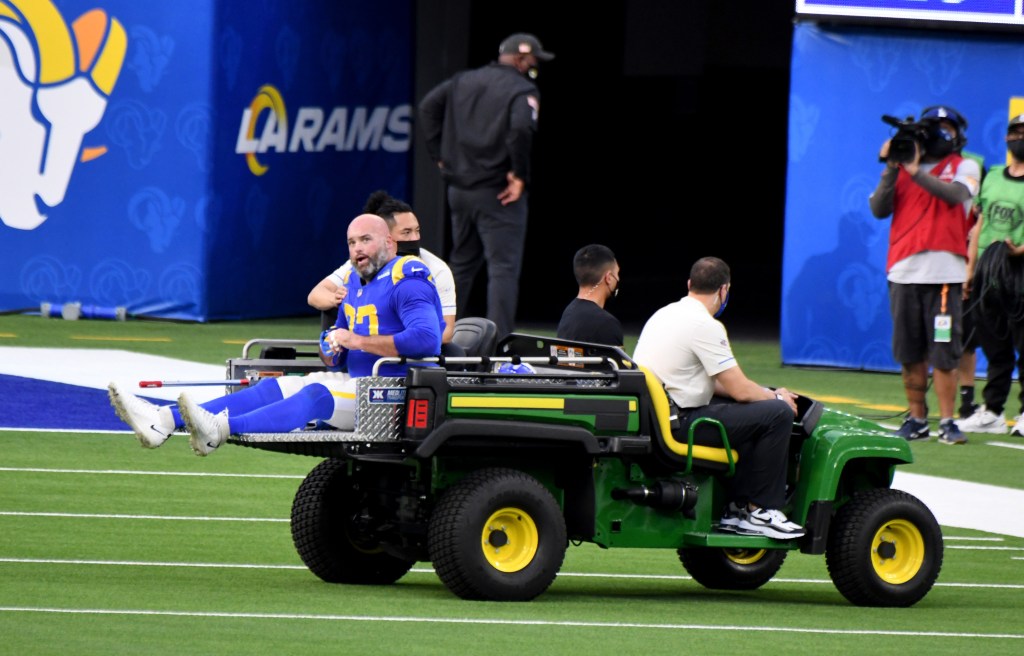 INGLEWOOD — The Rams had no update after the game on the severity of Andrew Whitworth’s knee injury, which knocked the left tackle out of Sunday’s game against the Seattle Seahawks in the second quarter.

Given Whitworth’s age, 38, it’s not unreasonable to think that an injury requiring season-ending surgery could spell the end of his 15-year NFL career with the Cincinnati Bengals and Rams.

If it does, the two-time All-Pro was a leader right to the end.

As Rams players — and Seattle quarterback Russell Wilson — exchanged hand slaps with Whitworth as he sat on the cart before being driven off the SoFi Stadium field, he had a message for teammates.

The injury happened when a Seahawks player fell on Whitworth during a play that resulted in a sack of Goff.

Goff said it was “tough” to see Whitworth, of all teammates, go down.

“With everything that he’s put on the line for all of us, you never want to see that,” Goff said.

Whitworth, the “old guy” on a young team, signed a three-year contract in March but said he would take his career one season at a time as he neared his 40s.

Whitworth had been playing well after having his usually heavy offseason workouts curtailed when he and other family members came down with COVID-19 in June.

He was replaced for the rest of Sunday’s game by Joe Noteboom, a young guard and tackle who’d just been activated from injured reserve on Saturday.

Rams coach Sean McVay talked about his respect for Whitworth, who is one of the Rams’ eight captains this season and a leader of the team’s work in the community.

“Andrew’s been so important to us. This guy is a foundational piece of what we’ve done. He represents everything that’s right about the Rams,” McVay said.

Said running back Malcolm Brown: “It was something you never want to see from anybody. But Big Whit, being the old guy, a guy like that, it’s a little more emotional. I know he’s going to come back with whatever leadership he has to come back with.”

The Rams also had no immediate updates on injuries to safety Taylor Rapp (knee) and kicker Kai Forbath (ankle).

Rapp went back to being a backup as rookie Jordan Fuller returned from a shoulder and neck injury and started Sunday.

Defensive tackle A’Shawn Robinson recorded two tackles in his Rams debut after being sidelined with a respiratory condition.

Forbath kicked a 23-yard field goal, but his missed extra-point attempt against Seattle was his second botched kick in two games since he was signed to replace struggling rookie Samuel Sloman.

The Rams have former XFL kicker Austin MacGinnis on their practice squad.

“We’ve got to continue to figure out this kicking situation,” McVay said. “That’s something we’re definitely going to address after this.”

The Rams defense’s average of a little over three points in second halves would be an NFL record if they kept it up over a whole season, the team’s PR staff said.

The Rams’ 275 yards of offense in the first half Sunday was a season best for them and the second-most the Seahawks have given up.

Russell Wilson’s 57.0 passer rating was only his second that low since 2016.

As part of the NFL’s Salute to Service Week, 571 cardboard cutouts arranged as a red, white and blue flag in SoFi Stadium’s south end zone bore images of service men and women, members of L.A.-area veteran support groups and families of fallen soldiers.

The Rams’ blue jerseys over bone-white pants Sunday were the fourth different combination they’ve worn since adopting new uniforms at the start of this season.

The Rams make their fifth and last trip to the East Coast to play a Monday night game against Tampa Bay, which is 7-3 after winning at Carolina on Sunday.

The Rams’ remaining regular-season road games are at Arizona in Week 13 and Seattle in Week 16.