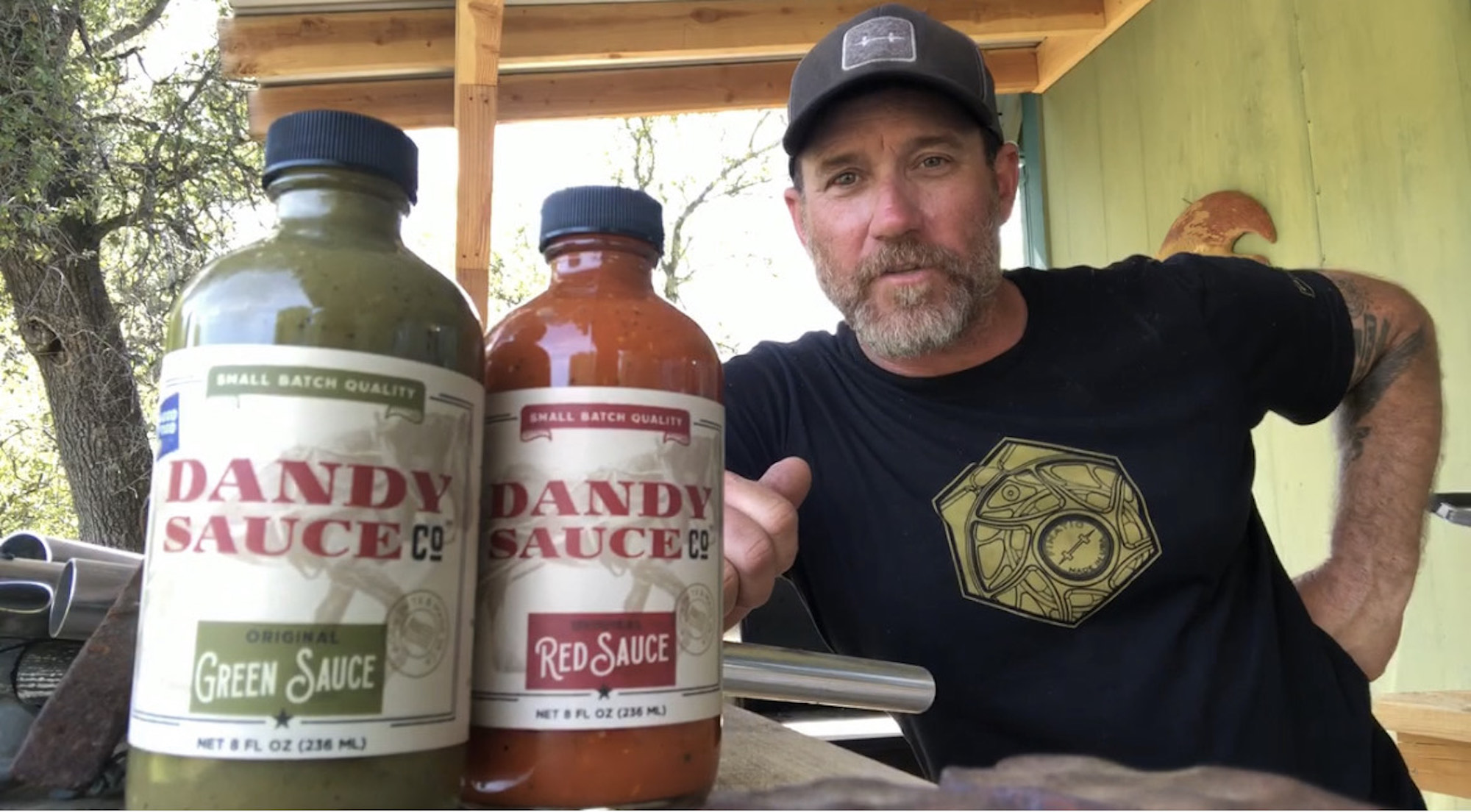 If you took a Family Feud-type survey of who the punk scene considered their version of Paul Bunyan, Hot Water Music’s Chuck Ragan would likely be the number one answer. How many other multi-decade punk rockers have a fly fishing business, their own sauce company, and a partnership with Traeger Grills?

With Hot Water Music becoming more of a steady part-time gig since their 2008 reunion, Ragan has been given more time to pursue his other passions — many of which receive the same intensity and dedication he brings to the songs that have won fans over for 13 studio albums (four solo and nine Hot Water Music) and a mess of other releases. And that doesn’t even include when he launched the greatest acoustic punk rock traveling party of all time, the now-defunct Revival Tour.

From tour guiding to condiments, SPIN spoke with Ragan about all of his passion projects outside of his music.

SPIN: What made you start the fly fishing business?
Chuck Ragan: Well, fishing has been a huge part of my life since I was a kid, it’s some of my earliest and fondest memories. It was always something that my family took part in. It wasn’t a sport, it was just something that we did. It was part of our life. We were meat fishermen, so it wasn’t how it is to me nowadays, but it was something that my parents and grandparents used to expose me to the outdoors at an early age. They connected me to the outdoors and showed me something that just blew my mind. I’m realizing now, at a later age in life, that they were just doing what their parents passed on to them and what they felt passionate about. It lit a spark in me. Not only did it give me a joy of the outdoors and a joy of fishing, but it also gave me a reason to protect these waterways and to stand up for the species that live in them.

I had to transform my career, so to speak, at the age of 40. In my 30s, my wife and I were talking about having kids and our future and what we were doing — and, in all honesty, I was looking at how my life was, how often I was touring, and how long I was gone throughout the year. I realized that once kids came into the picture, I didn’t want to be an absent dad. I had to find some kind of balance. I had friends in Northern California who were fishing guides, and I’d known fishing guides since I was a kid, so it was always something in the back of my mind. I had other guides who would call me when they needed someone to help them out with trips, and other people who wanted to fish with me, so it just became apparent that this was something I could have been doing for the past 20 years.

How did that transition go for you?
It took a second to kind of flip it in my head to realize that if I just made a few tweaks to my schedule and my program, I could actually make a living doing it. It would be something that would keep me home more with my family — once we had kids — so I immediately had a focus and an outlook. And not only that, I started working with this nonprofit organization called Cast Hope. Our goal is to take kids and their mentors — be it their parents, a big brother or sister, a guidance counselor, a teacher, or whoever they’re connected with — out on three fly fishing trips to help expose them to the outdoors and give them a reason to care about the outdoors and waterways.

I started having to balance the music career with the big outdoor work that I do, and it just makes everything easier. There’s nothing easy about it, because it’s still nose to the grindstone as an independent contractor, but it’s more time outdoors and with my family. It’s not much different than being a framer or a deck builder, and I have noticed that in some ways, it’s very much the same as being an independent musician.

How similar is life in a band compared to the life of a fishing guide?
They’re similar and completely different at the same time. It feels like a split lifestyle. When I’m at home, I’m waking up at 3:30 or 4:00 a.m. every morning. I don’t need to set an alarm, it just happens. Most of the time, I’m in bed when the boy goes to bed, so anywhere between 8:30 and 9:00 p.m., unless I have to stay up later for some reason to ready the boat or whatnot. Then when I transition to the road, those schedules really flip all of a sudden. I’m immediately up until 2:00 a.m. and getting up at 9:00 a.m. It’s wild, but when it comes down to what we’re doing — whether it’s playing in a band or guiding — you’re offering a service that you’re passionate about and you’ve learned. You’re just laying it out on the table for somebody and doing your best to make a good impression, so hopefully that client or that show goer comes back to hang with you again. You’re trying to work hard, deliver something great and give someone a wonderful memory.

Is there any advice you’d want to give to other aspiring fishing guides?
It’s just like any other independent business, you can’t expect a massive return right away. If it was about the money, I would probably be doing other things. You have to be willing to make a lot of sacrifices and put up with the hardships that come with it. The best advice I could give anybody — whether it’s music, creating a sauce company, fishing guides or any kind of artists — is that you get back what you put into it. You can do whatever you want for the most part, but if you put your energy, your heart and your soul into it, there’s going to be a return. Now, is that the return that you’re hoping for? It all depends on what your goals are. There are lots of people who join a band and don’t realize that the bands that are doing what they want to do have been grinding it out for 35-36 years and made a ridiculous amount of sacrifices. Things can sometimes happen overnight, but that’s like buying a lottery ticket. You have to be willing to work hard, make sacrifices and give it your all, and then positive things will come back.

In addition to being a fishing guide, how did you end up with the Dandy Sauce Company?
The sauce company originally started in 2014 under a different name with some other partners. We grinded on it for a while and really worked hard trying to build that company, but for whatever reason, we had just a super tough time with the business aspect of it. People loved the sauce — in fact, every time we made it, it would sell out immediately — but we just couldn’t keep up. I was busy with music and guiding, and my partner with restaurants and whatnot in Texas, and we just had a really tough time getting it off the ground.

There were a few years where it just felt stagnant. We were trying to figure out what we were going to do with it, and just as we were about to throw in the towel, we met Mary Risavi from Wise Goat Organics. She actually came out on a fishing trip and she brought all this stuff. Then she started coming on regular trips, and I mentioned the sauce company. The more I talked to her about how we were getting ready to throw in the towel, she had some different ideas. She offered to give it a shot, because our biggest problems were packing and distribution, which she knows all about. Mary came into the picture and just started killing it right away. She had all kinds of crazy ideas for distribution, and we immediately felt like she should be a part of this. Rather than just give her a piece, we made her an equal partner to do it as a team.

We re-launched it recently, and we’re absolutely thrilled with everything we’re doing. We have all kinds of new products and new stuff in the works, and it’s just food that we’re passionate about and use ourselves. It’s stuff that not only we enjoy, but also our families and communities. It hit me a long time ago that the majority of the people that I know and work with in the music business either run bars, restaurants, food trucks, catering businesses, festivals or whatever else like that. All of us are passionate about food and drink, and it was just something that I truly believed we could do something different with. Sauce is a saturated market, but we have something unique to bring to the table, and I already have a lot of friends who love it and are already ordering a ton of it. We’re just doing our best to build Dandy not not only for our kids in the future. I’m just passionate about music, food and fishing.

2022-08-04
Previous Post: Sound and Fury Festival 2022 spotlights the new face of hardcore
Next Post: Tacos With the Interrupters