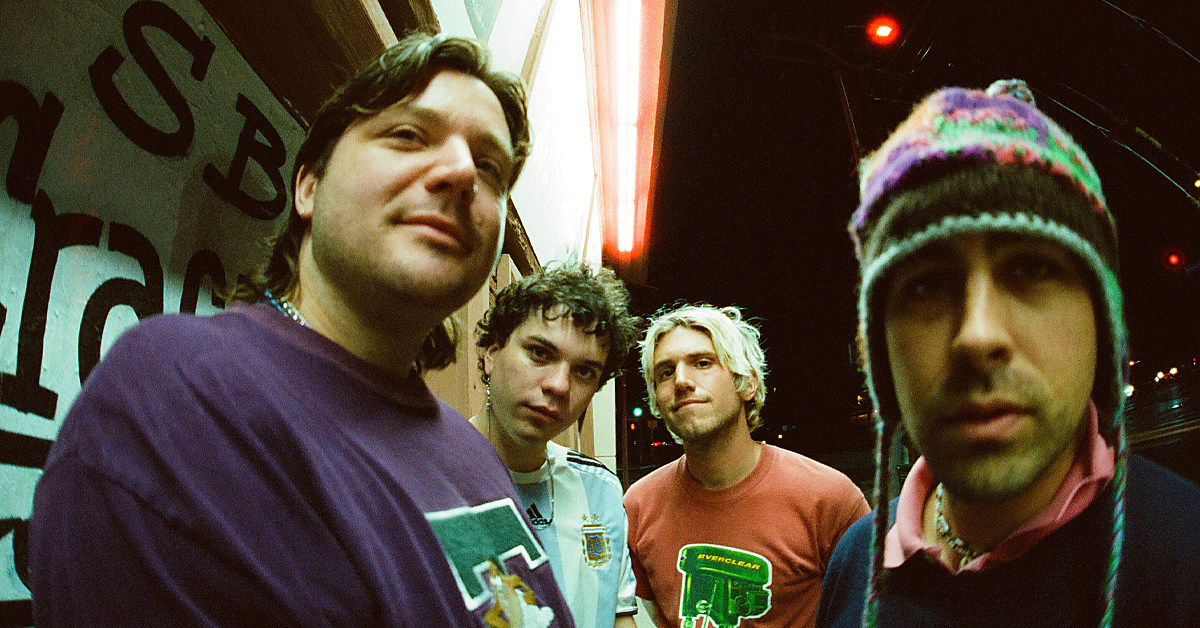 For Jason Yarger, the lead vocalist of HUNNY, the band’s musical journey has always been about getting in touch with their feelings the moment they happen — or at least that’s how they ended up writing nearly 100 demos during the pandemic. And today, they’re finally ready to open up the vault by releasing their new EP, Homesick, along with a campy, satirical music video. Equipped with heavy, guitar-forward instrumentals and vulnerable lyrics, HUNNY are tapping into the essence of early West Coast pop punk.

Although the group say their songwriting process changes with each track, Yarger, along with Jake Goldstein, Joey Anderson and Kevin Grimmett, have spent the last eight years crafting their unique sound. Reminiscent of modernized surf rock, the group blend synth and strong basslines to create what they call “sunshiney melod[ies].” And the nostalgia doesn’t end with HUNNY’s sound. The group also satirize vintage ’90s-era Abercrombie ads with their video release for “Homesick.” Touching on the idea of yearning for a forgotten past, Yarger takes on the role of a washed-up model, posing alongside beautiful people who would be printed on the side of shopping bags in malls throughout the country.

With a new year ahead, HUNNY get to look forward — instead of back — on the release of their new EP and a potential accompanying tour. Goldstein took some time to reflect on the creative process that brought the group from sea level to the top of the charts. For a group that seem to long for the past, they have a bright future.

So, you released your first EP only three years ago, and you’ve been pushing out new music super consistently ever since — is this the direction you saw yourselves going in way back in 2014?

We’ve always loved the idea of smaller, more frequent releases. It’s more fun for us if there’s less distance between creation and release of projects, and hopefully more engaging from a listener’s perspective. If anything, we’re always trying to release things more quickly, but life and bureaucracy get in the way.

You mentioned you’re trying to “get to the root of music that [you] want to make at this point,” but how would you describe that musical vision in your own words?

Really, I think we’re just getting in touch with what made us interested in playing music and specifically playing in bands in the first place. Right now that looks and sounds like loud guitars and honest lyrics. Beyond that, the rest is serving each song.

When it comes to your new EP, Homesick, it sounds like a lot of the songs touch on this idea of yearning for something — obviously with “Homesick” and “Speed Dial.” Is that going to be a throughline in the album?

Generally, these are themes that have been coming up super organically in both the songs we’ve written in the past and the songs we’re currently writing. Whether it’s nostalgia for a time you can’t get back, wishing that the future would meet you in the present or the desire for something more material outside of your control, I think they all share an emotional sweet spot that’s one of our favorites to tap into.

The songs I’ve heard from the new EP are reminiscent of ’90s and early 2000s West Coast pop punk. Have you always been drawn to this sound?

It’s definitely been a major touchstone for us forever. Growing up in Southern California, the tone and melody of that music are hard-wired into your brain from the moment you’re born. We really actively tried to bring it to the forefront starting with Y5, but it’s always been at the core of what we do.

What were the creative decisions when it came to the music video? Did it have anything to do with the documentary White Hot, which came out recently?

Nostalgia for that time period really seems to have captured the zeitgeist at the moment. When we discussed the treatment with our director, Mason [Mercer], it really struck me how there’s a lifestyle aspiration that came along with those brands, and also how outside of that vision we are, and how the juxtaposition of the two would make for a truly great visual. At once yearning for something, and at the same time condemning the idea it should be wanted for at all.