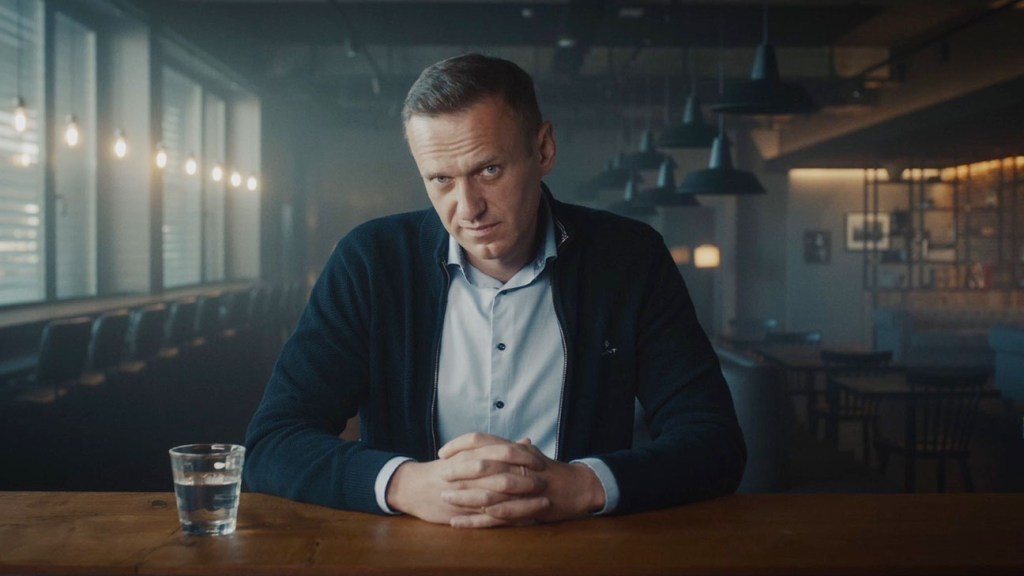 Despite having made only his second feature documentary, Navalny director Daniel Roher is good at pitches.

Back in 2017 in an L.A. recording studio, Roher had to sell fellow Toronto native Robbie Robertson on his vision for a film about the rock legend. “Kid, let’s make trouble together,” Robertson eventually told the precocious director before Once Were Brothers: Robbie Robertson and the Band, his debut feature, opened the Toronto Film Festival two years later.

Then in early 2020, a tenacious Roher had to sneak across the Austria-Germany border amid a strict pandemic lockdown and slip into a sleepy Black Forest town to pitch Russian politician and blogger Alexei Navalny on making a film about a man who’d stop at nothing — including a near-fatal poisoning and imprisonment — to replace Vladimir Putin as president of Russia.

“I had to present myself to the leader of the Russian opposition and convince him, much like I had to convince Robbie Robertson, that I was the man for the job,” he recalled to THR. “And I gave Alexei a similar pitch that I gave Robbie, basically, ‘I’m here. We should start right now. I’m ready to roll. And I will die to make this film,’” Roher added.

That pitch worked, too, because Warner Bros. has just nabbed the theatrical rights to Navalny, the CNN Films and HBO Max doc that debuted at Sundance and chronicles the harrowing story of a Kremlin critic who today sits in a grim Russian prison cell for his political opposition, with no release in sight.

But that’s where the comparisons between the Robertson and Navalny films stop, because production on Navalny plunged Roher into a high-anxiety world of political intrigue, spycraft and violence that the world has seen writ large with Russia’s recent invasion of Ukraine.

But with his youthful optimism, Roher argues that out of Russia’s brutal war of attrition in Ukraine could come something new, where democracy and the rule of law can be possibly restored. “As we are watching a Russian government commit war crimes on a daily basis, murder children on a daily basis, it is my hope that this film reminds people of the alternate vision of what Russia could be and what Russia will be, someday soon,” Roher said.

Navalny was shot in Germany over three-and-a-half months as Putin’s best-known critic recovers from a failed assassination attempt using a Soviet-era nerve agent Novichok, and Navalny and investigative journalist Christo Grozev of Bellingcat and others attempt to uncover the identities of the would-be hit men.

Roher insists Navalny as a master media strategist realized that, beyond the spontaneity and immediacy of YouTube and social media platforms like Facebook, Instagram and TikTok, a feature documentary was about the future. “He (Navalny) understood a documentary film is different from anything he’d done before, it’s sort of like a ticking time bomb. It comes out in a year, or two years even, whereas YouTube videos come out immediately,” he explained.

Roher added Navalny implicitly knew there would come a time — much as today — when he would have returned to Russia and been imprisoned and then could have a documentary get a wide release to remind the world of his story and political mission. “This is a man who needs no help getting his story out there, but a film is very unique and very different and that’s why he was so keen to let us in,” Roher recounted.

That fly-on-the-wall access in Germany had Roher’s cameras rolling one day when Navalny and Grozev began calling agents with Russia’s Federal Security Service — the successor to the Soviet Union’s KGB — to ask who had been tasked with murdering Putin’s biggest detractor.

After agent after agent hung up, what seemed a fool’s errand suddenly became an extraordinary scoop for Roher, and the centerpiece of his film. As his cameras rolled, Navalny and his investigative team were caught off guard when one FSB agent, Konstantin Kudryavtsev, unwittingly agreed to talk for nearly an hour about the failed hit job.

Roher, who speaks no Russian, recalled not realizing the full import of that scene as it unfolded. “I don’t know the language. But you didn’t have to speak any Russian to comprehend something extraordinary was taking place,” the director recounted about watching Navalny, Grozev and Maria Pevchikh of Navalny’s Anti-Corruption Foundation as their jaws dropped ever-lower with every new revelation.

“I understood that we were catching something remarkable and historic. And I remember sitting there on the off-axis camera, trying to be mindful and remind myself to just keep it in focus, keep it steady, make sure there’s a battery, make sure there’s space on the hard drive and just keep shooting,” Roher adds.

In the end, the Kudryavtsev testimony became a marquee scene in Navalny, as did the film’s climactic scenes where Navalny, seated next to his stressed wife, is on a flight to Moscow in January 2021, just five months after surviving a nerve agent poisoning.

Roher had two cinematographers on the flight, wading into the crush of reporters and cameras attempting to get Navalny’s attention as he was headed back to his homeland and likely imprisonment. Once the plane landed in Moscow, Roher and his cameras had to jockey for position amid the globally live-streamed drama as a fearless Navalny embraced his wife and was led away under arrest.

For Roher, the flight and airport scenes called for three moments in time to be weaved together for a seat-of-your-pants thriller effect: Bellingcat’s Grozev following real-time events in Vienna, Navalny and his wife on the aircraft and landing in Moscow, and staff at Navalny’s foundation glued to their own screens in Berlin.

“What gives that scene such a cinematic quality is the ability to jump through space and time in gaming with the subjects who are following along and watching this journey from their respective positions in Vienna and Berlin,” Roher explained.

At one point, as the director and his crew continued shooting Navalny in secret, they realized larger producing partners on the project were needed. Co-producer Diane Becker reached out to CNN Films, which quickly came on board with an HBO Max debut in mind.

But with Russia’s invasion of Ukraine raising Navalny‘s profile, sister film studio Warner Bros. has come forward with a special theatrical release on around 800 screens to kick off April 11.