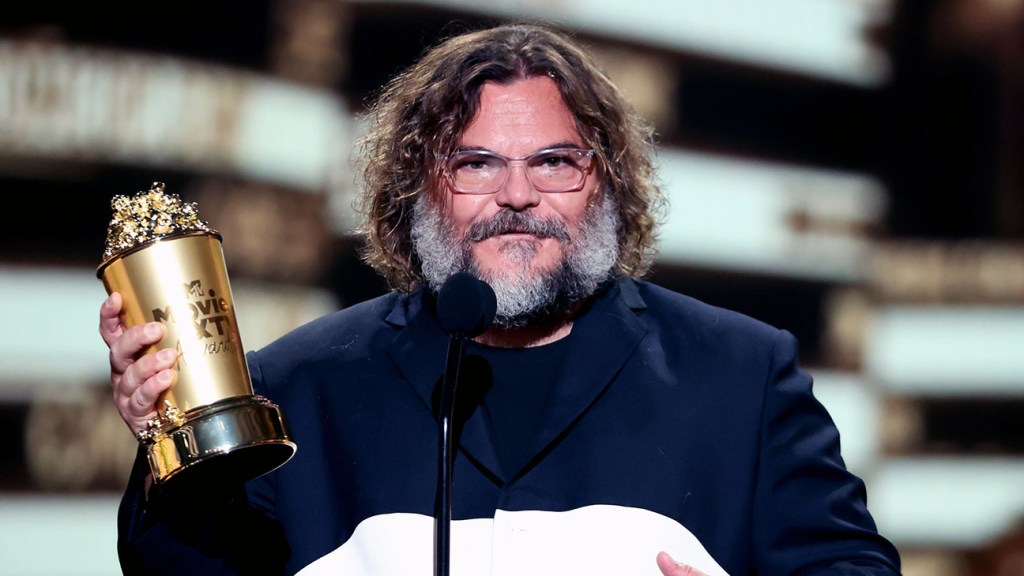 Awkwafina introduced the comedian before debuting a sizzle reel of Black’s greatest moments on screen. “He’s actually so much more than the guy that makes us laugh till we cry,” said Awkwafina. “He’s also a giant gamer, a facial hair aficionado, a Grammy winner and the only person whose Instagram actually makes you feel better about yourself, because he’s one of the nicest guys on the planet.”

Black then appeared onstage donning a panda hat that immediately fell off during his somersaults around the platform, with the crowd going wild.

He joked, “Comedic genius? C’mon, are you kidding? For what?” He then listed his credits that include School of Rock, Kung Fu Panda, Nacho Libre, Goosebumps and Jumanji. “My sweet dance moves on TikTok? What are we talking about? It’s ridiculous! I don’t deserve this, but I will take it! Thank you MTV! This is for all the School of Rock-ers out there and for all the Tenacious disciples and most of all my amazing wife Tanya and our two incredible boys. I love you, I love you, I love you.”

Black is the fifth recipient of the award that honors actors who have made significant contributions to the comedic world. Sacha Baron Cohen received the award in 2021, while Melissa McCarthy (2016), Kevin Hart (2015) and Will Ferrell (2013) also received the award.

Black is also a musician and part of the folk-rock comedy group Tenacious D, which he formed with his frequent collaborator Kyle Gass. Additionally, Black’s YouTube channel, Jablinksi Games, launched in 2018 and has since scored 5 million subscribers.

In 2018, he received a star on the Hollywood Walk of Fame. He will next star in Lionsgate’s Borderlands, based on the popular video game.