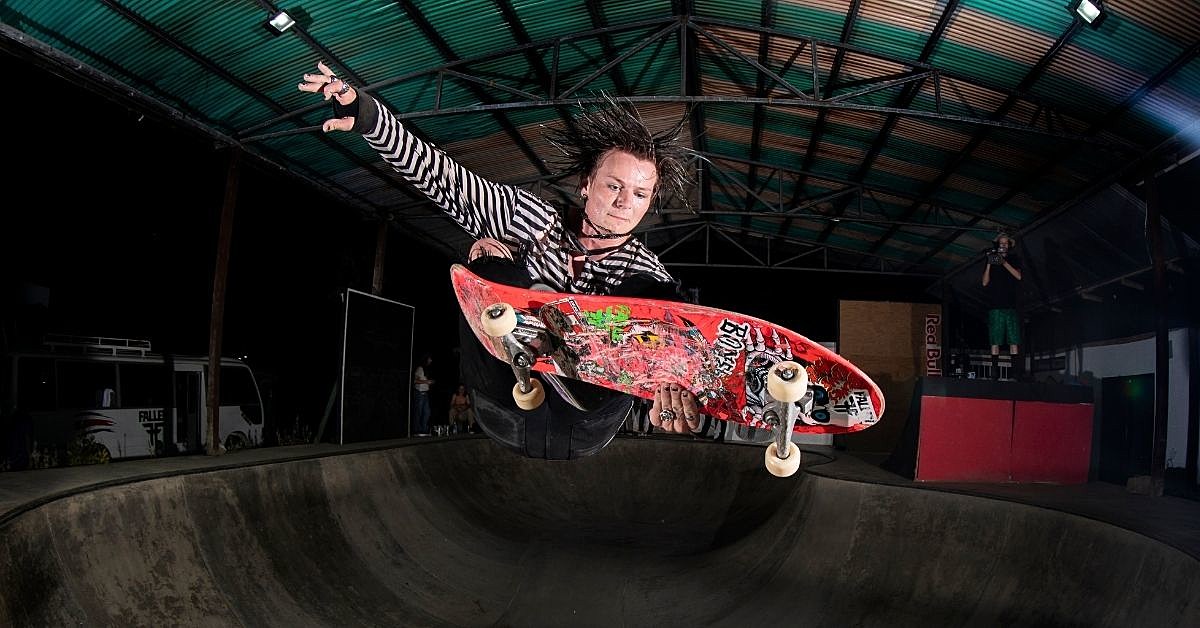 Skateboarding has always been an instrument of self-expression for Christopher Hiett. Growing up in a small town in Indiana, Hiett admittedly felt like the an outsider in his community, which was rooted in classic Midwest customs and limited exposure to alternative culture. Hiett is hard to miss, and not just because he is one of the most compelling new skaters in the circuit today, but because he presents himself authentically. At first glance, Hiett radiates a sense of artistic freedom, whether that’s through dyed hair, makeup and alternative fashion or with his penchant for retro-classic ’80s-style skate decks that are stark contrasts to the industry standard.

After moving to LA when he was only 18 years old, Hiett has since grown his following and connections through the skateboarding industry immensely over the course of three years. From high-profile sponsorships with the famous Powell-Peralta skateboard team to co-signs from industry legends Steve Caballero and Danny Way, Hiett is set to be one of skateboarding’s biggest stars.

Throughout every generation of skateboarding, there always has been a few key people who seem very musically connected or influenced. Am I off base to assume you are one of those people?

I look at skateboarding the same way musicians look at their craft. It’s all an art piece, one big composition, and everyone has their own way of doing it. For me, the people I listen to and look up to not only mold the way that I skateboard but the way that I present myself. I love listening to music. I’m not great at playing music, but I do love the signing aspect of music.

What music influences you?

The bands that I’m listening to the most right now are Palaye Royale, Bring Me The Horizon, Kim Dracula and the Plot In You. I also listen to older stuff like Avril Lavigne, who has always been the sickest to me, and of course My Chemical Romance. The list goes on and on. These artists are also just nice and kind-hearted people outside of the music.

Do you see a lot of older skating figures reaching out to you more so lately?

It’s a weird area because the way I am as a person, who is a little bit younger, I relate to the younger generation but also love and appreciate the older generation so much too. The skateboards that I ride are ’80s-shaped skateboards, and really I like to tie together every generation, and I want to start blurring the lines between them.

Do younger kids who are aspiring skaters reach out to you now that you are growing in popularity?

Yeah, especially in the sense of being themselves in certain environments. I’m from Indiana in the Midwest, and growing up there, it was pretty looked down upon to wear makeup and color your hair. In fact, in my school, you couldn’t have colored hair or piercings. Coming up from there and being able to finally be myself, I have a lot of conversations with kids who are in that world and environment where they feel like they can’t be themselves due to their area. I will always talk to someone, whether it’s a comment or DM, and explain that it’s important to keep the values of being yourself and not let other people tear you down. What’s most important is your happiness.

How did you eventually make it out to LA from Indiana?

I never really felt like I fit in where I grew up in Indiana. I wouldn’t go to parties or hang out with friends outside of school because what I did every day was skateboarding. I always dreamed about doing this and always since I was in sixth grade was writing essays about moving to California to follow my dream. When I was graduating high school, my parents separated, and I knew that there was nothing left for me in Indiana, and I wanted to start my “real” life.

I was sponsored by Powell-Peralta since I was 14, and I came out to California for one week to decide if this could work out. The team manager Deville Nunes at the end of the week offered me to come to live with him, essentially in his closet, and I knew I had to do it. I got on a plane with my clothes and lived in a closet for a few months until I found places to go, and I started to make connections with people who were more like me. As soon as I came out here, it was so much more accepting, and I have never looked back since. I wouldn’t want anything else in the world than to be out here with all of these amazing people.

It sounds like your intuition was correct. How has your career flourished since making the move? I feel like you are definitely up next in terms of becoming a household name in skateboarding and beyond.

I’ve been here for three years now. I would feel very grateful if I was up next. That would simply mean more friends and people who I can talk to and help me as much as I can help them as well.

Who are your biggest inspirations in skateboarding?

Obviously, Steve Caballero is one of my favorites. Tony Hawk is also a huge inspiration, and he’s an incredible person, not only an amazing skateboarder. Dylan Rieder, who sadly passed away, was one of my biggest inspirations growing up because he showed that there is so much more to skateboarding than just tricks. He showed skateboarding as his canvas and his portfolio of art, and every trick that he did was so fluid and resembled a masterpiece of art. That’s always been so inspiring to me.

I would love to be able to drop my own personal skateboard, for the main fact of having my name on the skateboard, to be an incentive for kids to go up to each other and have a conversation, not feel left out and let the board become more than just me and become a symbol of acceptance and who you are as a person.

This story appeared in issue #407, available below.