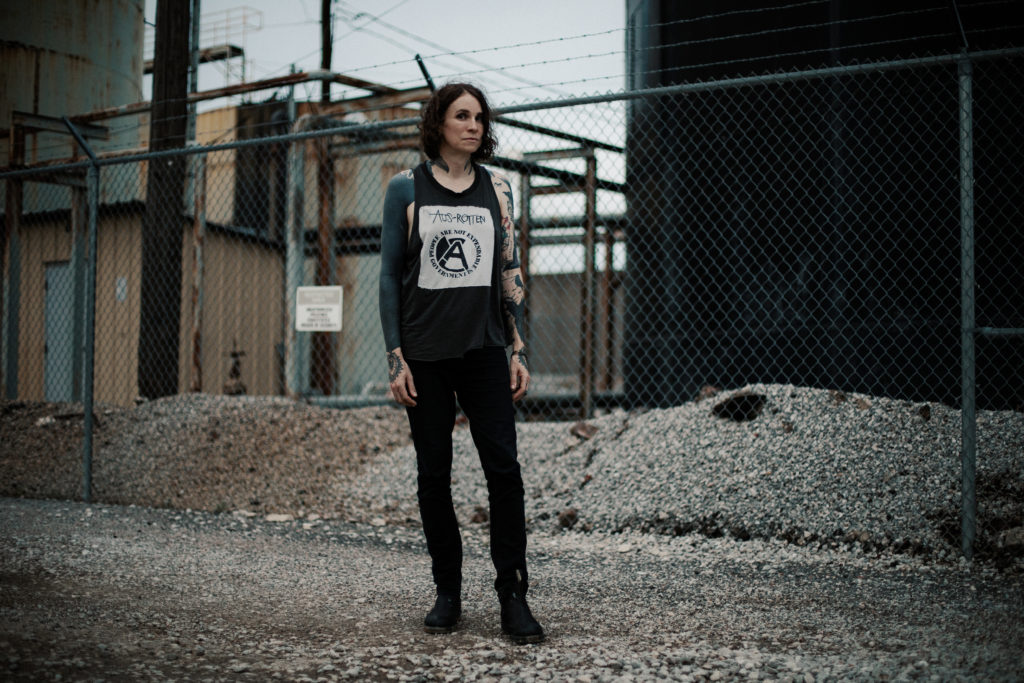 Laura Jane Grace released a new EP today, but you wouldn’t know it if you weren’t paying attention.

At a point in time where society, punk rock, and everything in between is more online than ever before, Grace stealth-dropped At War With The Silverfish (via Polyvinyl Records) like her fellow cultural icon, Beyoncé, did for her 2013 self-titled album. On one hand, it takes a certain amount of courage and understanding of your fan base to release a new project without any kind of prior promotion or announcement (beyond the occasional cryptic tweet). On the other, it’s not like anyone really has a “How to Release an Album During a Global Pandemic” playbook drafted up yet, so why not just go with it?

“These are certainly unprecedented times that we’re living in, so the normal way of putting out a record and then going on tour for like a year promoting it is just not possible right now for obvious reasons,” Grace says over Zoom. “Also, the vinyl turnaround time these days is ridiculous. So even the idea of trying to time releases and plan releases in the same old way that you used to — it just doesn’t work. I’ve just been trying to stay sane through the past year and a half or whatever, so I’ve been in this mentality of like ‘Just keep working. Just keep writing songs. Share them while you’re excited about them so it feels relevant to you.’ Then once things start to open up and there are opportunities to go out there and play shows — or once the vinyl is ready — just let that happen when it’s ready to happen. I’m not trying to rigidly control everything and define it with this plan or anything like that.”

Grace is all smiles anytime she mentions the new EP, and her latest work combines that upbeat outlook she maintains these days with the thoughtful lyrics and songwriting she’s been bringing to punk rock for decades now. Like most of her work, the seven tracks feature a lot of her day-to-day thoughts and experiences from the last 18 months (ranging from the mundane to the dramatic), but still smoothly and deeply relate to the collective human experience of recent times. But even though At War With The Silverfish was written, recorded, and released during this seemingly never-ending pandemic, it’s decidedly not a “pandemic album.”

“I consciously wanted to do something that had nothing to do with the pandemic,” Grace says. “I did not want it to be focused on the here and now. It felt like I had these songs, and I don’t really know what they are. They’re just the songs that I’ve been messing around with in these months of being locked inside. A song like ‘Day Old Coffee’ is obviously just about day after day of being locked inside your fucking apartment, drinking coffee and bouncing off the walls. It’s kind of lighthearted and fun, but there are deeper moments too. I was almost in a state of disassociation — just not wanting to have it be any kind of acknowledgment or reaction to what’s happening in the world.”

Along with the new EP, Grace is also getting back into the habit of performing live after the longest layoff of her adult life. Despite having about a quarter-century of live music under her belt, she says a lot of the muscle memory she took for granted abandoned her during quarantine. She mimics holding a guitar way too high as she explains that she recently had to ask herself things like “How do I stand on the stage?” and “How am I supposed to hold the guitar right now?” when preparing for the dozen-ish shows she has planned for 2021. Of course, her most memorable show of the year likely already happened, as she (along with Brendan Kelly of the Lawrence Arms) returned to the stage to put on the second-most famous performance in the history of one of Philadelphia’s most famous venues, Four Seasons Total Landscaping.

“The Four Seasons show was funny, because the whole thing left me with more questions than it did answers regarding the history of the venue,” Grace laughs. “It was really an awesome show and a good vibe, and everyone who showed up just had the best energy. The situation spoke to the circumstances in that way. As I told my friend who was there with me, if you took away the context of everything, this actually wouldn’t be that great on paper. If a tour manager woke you up and was like ‘Alright, you’re playing at 10:00 in the morning in a landscaping company’s parking lot,’ you’d be fucking bummed! But because of everything else surrounding it, it was the best thing ever.”

A couple of decades ago, performing at the most famous landscaping shop in the world might’ve seemed like simultaneously a career highlight and lowlight for Grace (although good luck being taken seriously by anyone in the early 2000s when explaining the Rudy Giuliani press conference disaster), but these days, she takes it in stride. Back when she formed Against Me! — which was “for all intents and purposes around 9/11” — she thought anything “cool” or noteworthy in both music and life, in general, had already happened decades before she was in the scene. She didn’t expect to see her band last 25 years, release seven albums, and help popularize a brand of punk rock that valued intelligence, complex emotions, and acoustic guitars alongside the typical anarchy, frustration and rage. She also presumably didn’t think she’d launch a successful solo career to run parallel with the band, all while becoming one of the most famous and beloved LGBTQ icons in all of music and eventually surviving a pandemic.

But now, things are different. Grace has the perspective that only decades in the industry (being a “lifer,” as she sees it) could give her. She realizes that riding the highs and lows are part of the same game, and that it all ultimately comes down to putting one foot in front of the other and writing one song after another until she finally gets where she’s going — and then immediately choosing a new destination. She’s not worried about promoting At War With The Silverfish, balancing Against Me! with her solo work, or where the Devouring Mothers fit into everything. She’s just releasing the songs she wants to put out, and figuring out the rest as it comes. Hell, as far as she knows, she may have just released a handful of future Against Me! classics, she just might not realize it for another decade or two.

“When I was younger — and I think this goes for everyone in a band — it would have been more rigid like, ‘If this is a solo record, these have to be solo songs and this is all that they can ever be.’ But then you learn that they can still be whatever you want. There’s no reason why we couldn’t take one of these songs and work it into an Against Me! version. Then 10 years from now, we record a live record with a version of the song on the live record, it becomes an Against Me! staple, and we end up playing it every night. The only limits that actually exist on stuff like that are your own things, and they’re really just false and illusory. I’m thankful to have that perspective now, because I just don’t define any of it too rigidly anymore.”

2021-09-22
Previous Post: Here are the newest 10 L.A. restaurants that made Michelin’s Bib Gourmand list
Next Post: Tom Morello and Bring Me The Horizon Join Forces on ‘Let’s Get The Party Started’