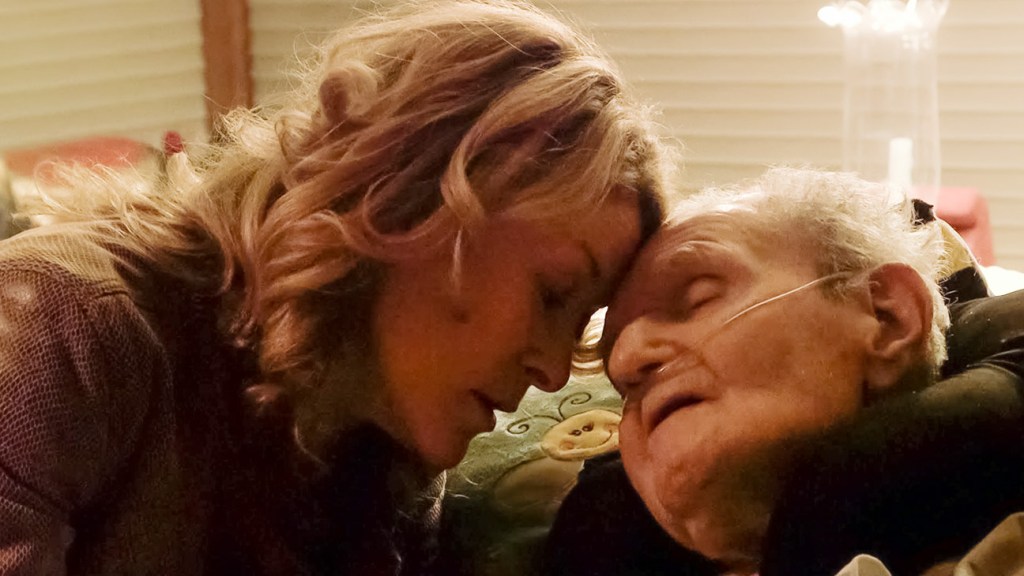 Late in Last Flight Home, Ondi Timoner’s heartbreaking documentary about the last two weeks of her father’s life, the director and her sister, Rachel, sit beside their dad, Eli, as he confesses what he believes are his greatest sins. He reaches for decades-old memories, dusts them off and lays them in front of his daughters. Rachel, a rabbi tasked with spiritual soothing, quietly lets Eli re-present old wounds and past shames. Timoner has a harder time bearing witness. Just as her instinct to reframe kicks in, her sister stops her. “The exercise is not to give him narration. The exercise is to draw from him his feelings about the things he fell short on,” Rachel says. “Not to make it better.”

How haunting those words are. How truthful, too. The urge to narrativize the lives of our loved ones is a great one. We extract meaning from memories and present them as evidence of our love. We hope these new, different stories — the ones about the value of someone’s life, its impact on ours — shortens the gap between how they see themselves and how we feel about them. We pray, perhaps a little selfishly, that it will make saying goodbye somewhat easier. But it doesn’t — not really — and Timoner’s intimate project ripples with evidence of that tension. Her film is a mellow observation of death and an exercise in anticipatory grief.

The Bottom Line A thoughtful and wrenching goodbye.

When her father, aged 92 at the time of filming, decided he wanted to end his life in 2021, Timoner and other members of her family were surprised. Their shock and cautious support are chronicled at the beginning of Last Flight Home, which economically walks viewers through Eli’s struggles. A stroke in his early 50s left him paralyzed on the left side of his body. He was forced to step down from the airline company he founded, his finances plummeted and his life, despite the grace with which he approached it, took a 180-degree turn.

It was the onset of the coronavirus pandemic in 2020 that made an elderly Eli more acutely aware of daily challenges. He was prone to falling because he struggled to walk by himself, and was sent to the hospital for trouble breathing. Right before his family discussed placing him in a nursing home for full-time care, Eli told the director that he wanted to end his life. California is one of a handful of states in the U.S. that have authorized medical aid in dying. The lengthy process requires individuals to make the ask three times and talk to two physicians before they are prescribed the cocktail of drugs that will slow down their heart rate until they die.

Timoner chronicles this entire process with affection and sobriety. Last Flight Home is composed of a collage of images — home videos, recorded Zoom and FaceTime calls with family and friends, photos of her father through the years and footage the director shot during the 15-day process. The visuals may lack aesthetic cohesion, but they are considered enough to fulfill the project’s goal of presenting dying as ritual — a process that envelops members of one’s community. Timoner does not spare us the details, which is a gift in a nation and culture that pretend the dead and the dying do not exist. She films a medical team and Eli’s homecare aid lifting him from a wheelchair to the bed stationed in the living room of his house; she films him struggling to hold objects with his weakened, varicose-veined hands; and she films him in conversation with members of his family, joking and dispensing life advice. These convenings crystalize Eli’s personality and the shape of him as a person comes into view.

Time structures the film, which finds its footing when Timoner formally begins the 15-day countdown clock. The title cards — 15, 10, 5, 3 — briefly interrupt the narrative and, like a score, tune our feelings. Each day doubles as a lesson in Eli Timoner, the individual. We learn of his early years as an executive of Air Florida, how he lost his fortune and the company after the stroke and how a lack of disability legislation left him unprotected. With each new challenge, shame grew alongside Eli’s stoicism. He contorted his personality in response to it and, in these final days, the depth of his humiliation and distress becomes clearer.

But Timoner doesn’t only chronicle Eli’s version or vision of himself. As the family works through the practical nature of death — scheduling goodbye Zoom calls with friends, checking Eli’s bank accounts, assessing his debts, tracking his bills — they also share their stories. Timoner’s siblings, Rachel and David, talk to Eli and to each other about the impact their father had on their lives. The grandchildren seek advice from Eli about how to live a good life, conversations that allow the Timoner patriarch to flex his sense of humor and warmth. Then there’s Timoner’s mother, Lisa, who visibly contends with the thought of losing her husband, best friend and partner. Her grieving is quieter and, presumably, more off-camera.

Even knowing that death is coming does not prepare the Timoners or the viewer for the final moments of Last Flight Home. The process is methodical — Eli ingests the drug cocktail in three parts — and the mood is anxious and sad. When his final moments do arrive, when the time of death is recorded, a calm settles in. The members of his family hold each other, and Rachel’s words ring anew. “You were not perfect in this life,” she told her father at the end of his confession, “but you were good.”

2022-10-31
Previous Post: 11 alt icons of TV and film that shaped a generation of emos
Next Post: BloodList Puts Focus on Best Horror and Dark Genre Scripts of the Year