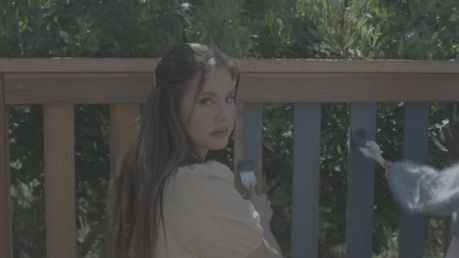 Lana Del Rey just dropped the video for the title track from her upcoming record, Blue Banisters, which is out this Friday.

Making for a wholesome home video, “Blue Banisters” begins mirroring its opening lyrics, “There’s a picture on the wall / Of me on a John Deere.” Maintaining her remarkable sultry and silky vocals, Del Rey’s aura has turned from her Paradise, heart-shaped glasses and cigarette smoking days into a sweetheart of the country, bearing long cotton dresses and gathering her friends to simply paint each other’s feet.

Turning to her girlfriends as muses and inspirations throughout her music released this year, as a group of them bear the cover of Chemtrails, Del Rey has found comfort in the endless support of the women that have her back: “There’s a hole that’s in my heart / All my women try and heal / They’re doing a good job convincing me that it’s not real.”

Blue Banisters is Del Rey’s eighth album, is out on October 22. This is Del Rey’s second record to be released this year, following March’s Chemtrails Over the Country Club. She already dropped a track off the forthcoming record, “Arcadia,” including an alternative video.