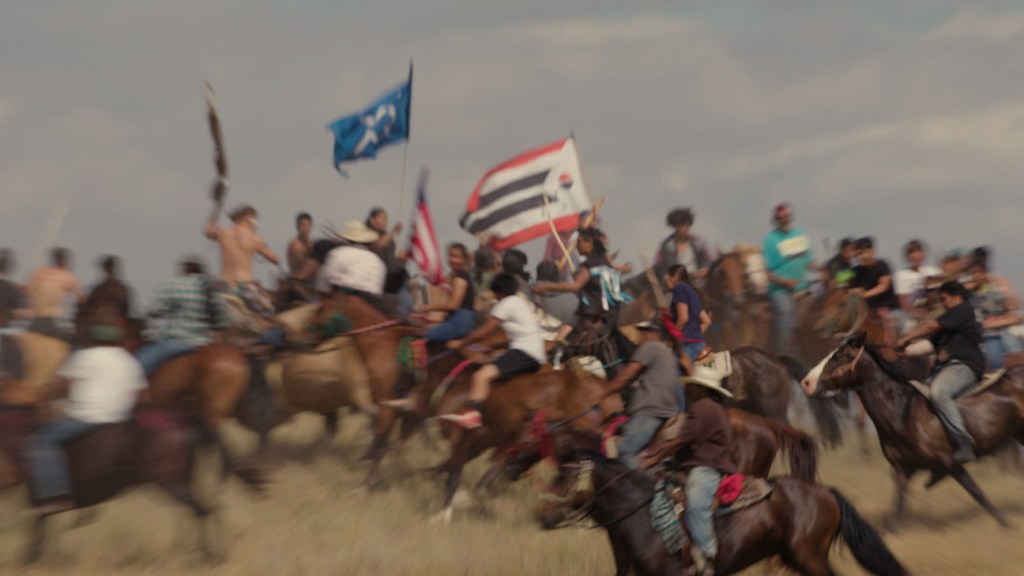 Lakota Nation vs. United States is a visually dynamic documentary, and it’s also one that delves into the power of language and how we use it. There are the voices of interview subjects — sensitive, piercing, anguished, hopeful — relating a generations-long fight for justice that goes to the core of American history and yet is barely discussed in classrooms. (Have you ever heard of the Dakota 38?) There’s the legalese of treaties the U.S. government signed with the tribes of the Great Plains and violated before the ink was dry — or as soon as gold was discovered in designated Indian territory.

The filmmakers’ interest in language pervades Lakota Nation, most exquisitely in its use of poetry as narration, with an extraordinary poet, Layli Long Soldier, reading excerpts from her work onscreen and in voiceover. She and a strong chorus of interviewees explore the impact of what we choose to call things. Most of them are members of the Lakota or Dakota Nation, the two main subcultures of the Očéti Šakówiŋ — a name few Americans know, long ago replaced by “Sioux.” Their languages were outlawed, along with their religion and rituals, while a mythology of the West became the official story, calling invasion by European settlers self-defense and Native people’s resistance aggression.

The Bottom Line An urgent and lyrical corrective to the official story.

Investigating a “muddy switchback trail” of lies and atrocities, Long Soldier’s words and voice, and those of the authors and activists who appear in the doc, offer a potent counternarrative to the one most non-Native Americans have been taught, revealing a tireless struggle that began centuries ago, with the arrival of colonizers on the continent.

At the helm of the film, Jesse Short Bull and Laura Tomaselli (editor of MLK/FBI) interweave DP Kevin Phillips’ vibrant and sublime images of the natural world with the surreal Americana of tourist attractions where Custer’s Last Stand is reenacted. The directors move between intimately shot commentaries and a sharp curation of clips from TV news, cartoons bursting with cowboys-and-Indians stereotypes, and historical dramas, Hollywood-style. There’s a deliberate rhythm to Tomaselli’s editing that’s in sync with Long Soldier’s measured readings, as is Raven Chacon’s versatile, subtle score, sometimes propulsive, sometimes Satie-esque.

Lakota Nation vs. United States is divided into three sections, the first and longest being “Extermination,” which examines the collision of cultures that began with the arrival of Europeans: the battles and peace treaties, the double-crosses by the United States. Part two, “Assimilation,” is the most harrowing, a look at the day-to-day and long-term ramifications of genocidal policies that stripped the Lakota of their land, horses and weapons. In the name of American private-property capitalism and colonialist paternalism, the so-called savages were “civilized” by dividing their communal land — and selling most of it to non-Indigenous settlers. They were forced into economic dependency and Christianity and, most horrendous, their children were removed and placed in abusive boarding schools in order to purge them of their identity, a practice inflicted on Indigenous people in Australia and Canada as well.

Short Bull and Tomaselli include photographs of children in the boarding schools that are haunting, even in the rare instances where the child is smiling. A couple of interviewees speak movingly of the residential schools’ effect on their parents. Eventually the Lakota and other Native Americans were relegated to reservations, and couldn’t venture beyond their confines without a pass — comparable to restrictions on Palestinians in the West Bank.

As to the ways that Hollywood has burnished a one-sided rendition of the American nation-building enterprise, the vaults hold enough material to fill a documentary series or two. The clips chosen here pack a punch, whether the film in question is an unsurprising choice (Custer of the West, The Searchers) or less obvious. Marveling at the beauty of the North American terrain, Doris Day’s gosh-golly Calamity Jane says, “No wonder the Injuns fight so fierce to hold on to this country.” A clip of Daniel Day-Lewis in Spielberg’s Lincoln illustrates a point in Long Soldier’s “38,” one of two poems excerpted in the film.

The 16th president is presented as a courageous seeker of truth in the run-up to the Emancipation Proclamation. But there’s no mention in the 2012 movie, not to mention school curricula, that within days of that event, Lincoln ordered the execution by hanging of 38 Dakota men, the largest legal execution in American history, as punishment for their actions during the U.S.-Dakota War of 1862, also known as the Sioux Uprising. The documentary doesn’t go into detail; its point is that this major event has been pushed to the shadows, its significance denied, not even rating a mention in a two-and-a-half hour feature about the precise period of time in which it occurred.

Parsing the history we’ve been fed and the Lakotas’ inheritance of countless betrayals, Lakota Nation is a portrait of a brutal rupture between a people and the land they consider a life-giving relative — specifically, the sacred Black Hills they call He Sapa. It’s why the Očéti Šakówiŋ rejected the money they were awarded in a 1980 Supreme Court decision. And it’s why Mount Rushmore, generally lauded as a feat of engineering and artistry, has a very different meaning to them. Not only does it celebrate four leaders who played roles in removing Native Americans from their lands, but it’s carved into a holy mountain the Lakota call the Six Grandfathers.

The final section of the documentary, “Reparations,” focusing on the Landback Movement and environmental activism, offers a sense of optimism and underscores the resilience of the Lakotas, from Sitting Bull and Crazy Horse to present-day warriors for justice. Regarding opposition to the Dakota Access Pipeline, it acknowledges the importance of allies and coalitions. Speaking of allies, the involvement of Mark Ruffalo and Marisa Tomei as executive producers should help to propel the film, but regardless, Short Bull and Tomaselli have made an affecting and timely chronicle. At its core is a question that could be applied to much of human history, but that burns with particular intensity in the story of the United States: Why must the push for “progress” be built on so much fear — a need to exploit, subjugate, silence and remove what isn’t understood — rather than on an openhearted curiosity to understand and connect?