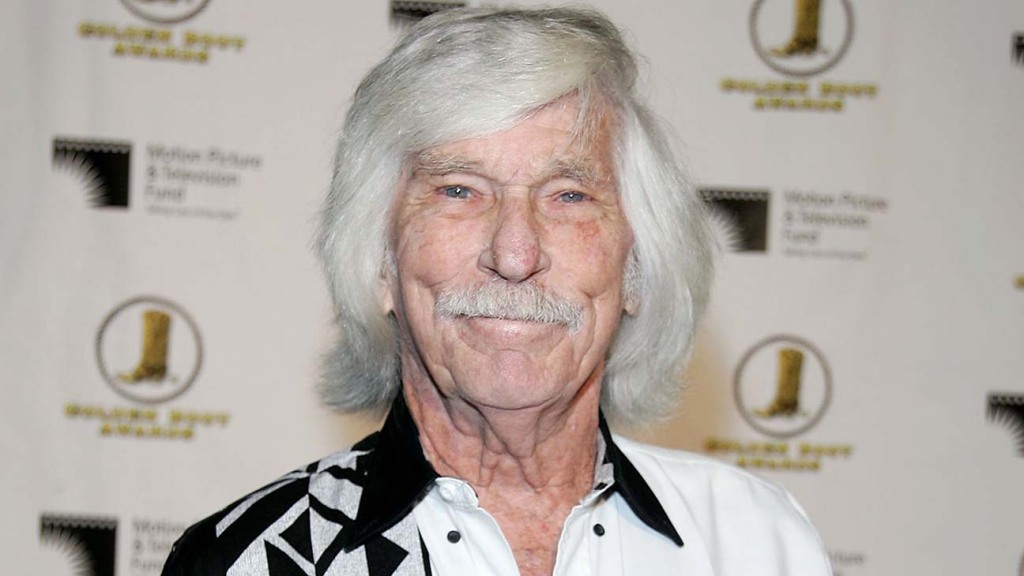 L.Q. Jones, the colorful character actor who worked on dozens of Westerns, including the Sam Peckinpah classics The Wild Bunch and Ride the High Country as a member of the famed filmmaker’s regular posse, has died. He was 94.

Jones died Saturday of natural causes at his home in the Hollywood Hills, his grandson Erté deGarces told The Hollywood Reporter.

Jones portrayed ranch hand Andy Belden on 25 episodes of NBC’s The Virginian over an eight-year span, was one of the bad guys who slipped a noose over Clint Eastwood’s neck in Hang ‘Em High (1968) and played a sheriff on the 1983-84 NBC primetime soap The Yellow Rose, starring Sam Elliott, Cybill Shepherd and Chuck Connors.

In a career that spanned more than five decades, Jones is perhaps best known for his turn as the bounty hunter T.C. in The Wild Bunch (1969). He and Strother Martin, as Coffer, “bring their depraved characters to life with a childish energy — they take great enjoyment from making killing into a contest as they jockey to claim who has a higher body count after each bloody encounter.” That’s how a Warner Bros. website promoting the film describes their performances.

Jones first worked with Peckinpah in 1960 on the short-lived NBC Western Klondike. He portrayed one of the four ruthless brothers who fight it out with Joel McCrea and Randolph Scott in Ride the High Country (1962) and was a confederate soldier (and Warren Oates’ brother) in Major Dundee (1965).

He also played no-good characters who meet their untimely ends in Peckinpah’s The Ballad of Cable Hogue (1970) and Pat Garrett & Billy the Kid (1973).

“Sam was a genius and I loved him, but he was a basket case. He drove everybody nuts,” Jones said in a 2017 interview with Nick Thomas.

On the other side of the camera, Jones directed, co-wrote and produced A Boy and His Dog (1975), a cult black comedy set in the post-apocalyptic year of 2024 that starred Don Johnson and Jason Robards and was based on a novella by sci-fi legend Harlan Ellison.

He was born Justice Ellis McQueen Jr. on Aug. 19, 1927, in Beaumont, Texas, the son of a railroad worker. When he was young, his mother, Jessie, was killed in an automobile accident, and he was raised by relatives.

“I had a horse by the time I was 8 or 9 and grew up around tough rodeo people — my uncle was into roping — so Westerns were easy and fun,” he said.

He served in the U.S. Navy and studied law at the University of Texas, where his roommate was future Daniel Boone star Fess Parker. After college, he bought a ranch in Nicaragua to make money on beans, corn and dairy, but that didn’t go as well as he had hoped.

Parker had moved to Hollywood and had appeared in a few films when he sent his college buddy a copy of the Leon Uris novel Battle Cry, which was about to become a big-budget Warner Bros. war movie directed by Raoul Walsh. Parker was playing a soldier in the adaptation.

“Fess encouraged me to come out and drew me a map on the back of a laundry-shirt stuffing showing how to get to the studio,” he recalled. “Within two days of arriving, I had the part of [Pvt.] L.Q. Jones in Battle Cry and probably would never have been in the business had it not been for Fess.”

McQueen liked the character’s name so much, he decided to adopt it as his stage name.

The newly minted L.Q. Jones kept extremely busy after that, appearing on such shows as Cheyenne, Gunsmoke, Laramie, Wagon Train, Lassie, Rawhide, Johnny Ringo, The Big Valley and Perry Mason — sometimes doing two or three series a week — and in films including Target Zero (1955) — his first of his many pairings with Martin, another Peckinpah regular — Elvis Presley’s Love Me Tender (1956) and Flaming Star (1960), Don Siegel’s Hell Is for Heroes (1962) and Walsh’s The Naked and the Dead (1958).

He said Stanley Kubrick offered him the role of Major T.J. “King” Kong that went to Slim Pickens in Dr. Strangelove or: How I Learned to Stop Worrying and Love the Bomb (1964), but he was “tied up with another picture” and had to pass.

Working on a Peckinpah film could be a challenge, he noted in a wide-ranging interview for the website Camera in the Sun.

“If you’re not standing in the same place Sam envisioned it a thousand times for the year — and he’s not told anybody what it is — but if you’re not there in that particular place, he’s furious because you haven’t done your job right in his estimation. That fact that he hadn’t told you anything doesn’t make a difference,” he said. “And it doesn’t make a difference whether you’re Bill Holden or an extra. Those of us who’d worked with him — you notice he had a group that worked with him his whole career — just learned where to be, thinking the way Sam would think.”

In the mid-’60s, he and actor Alvy Moore formed the production company LQ/JAF, and they made four films: The Devil’s Bedroom (1964), which Jones also directed; The Witchmaker (1969); The Brotherhood of Satan (1971), which he co-wrote; and A Boy and His Dog, which he said served as George Miller’s inspiration for The Road Warrior.

“After doing A Boy and His Dog, I had a whole bunch of offers to direct and more money than it cost to make the picture, for chrissakes,” he said. “But I couldn’t see working all that time and all the effort to make that. So I just kept saying, ‘No,’ and I finally just said, ‘To hell with it,’ and just stopped and went on with the acting. Because by then I could pretty well pick and choose what I wanted to do.”

Survivors also include his children, Randy, Steve and Mindy.