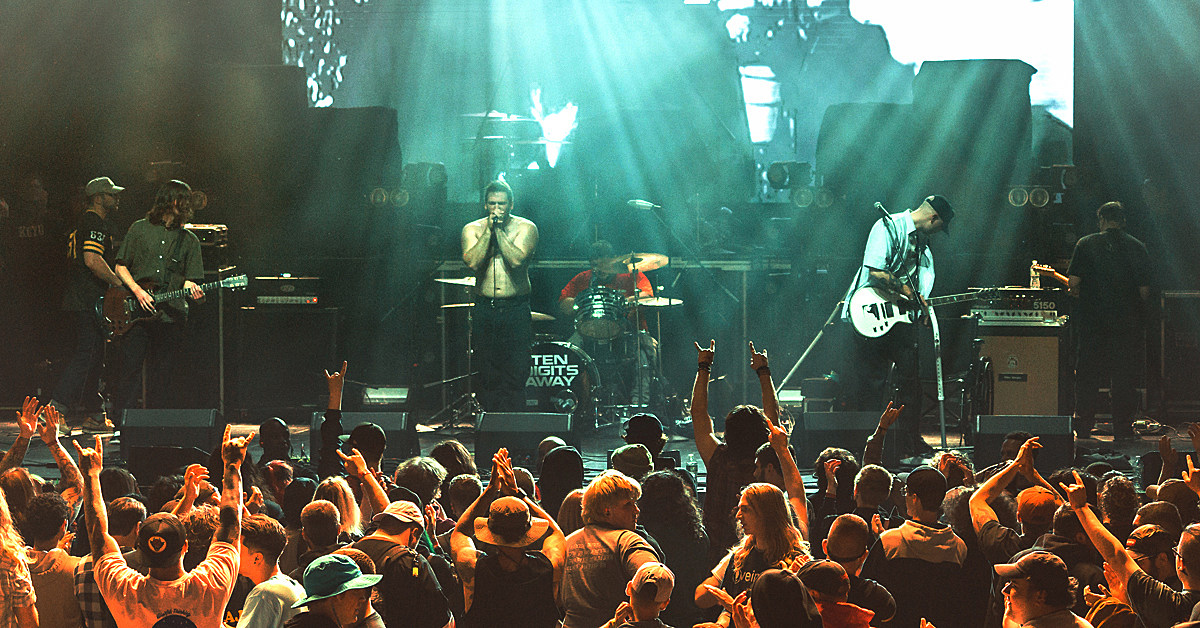 It goes without saying that Long Island, New York, is synonymous with hardcore and emo music. From Glassjaw to Taking Back Sunday, the region has birthed some of the scene’s heaviest hitters.

Read more: How hardcore band Anxious made a coming-of-age record that fuses doo-wop and pop

Now, in 2022, Long Island’s own Koyo are set to become the scene’s next major export of candid and timeless music. At the tail end of 2021, they released their unexpected hit EP Drives Out East, a four-song collection of immediate, nostalgic and sincere material that scored the band near-immediate hype and a record deal with scene powerhouse Pure Noise Records. Koyo are gearing up to record their highly anticipated debut LP and bring their brand of melodic hardcore to the masses.

Since the release of your critically acclaimed EP Drives Out East, Koyo experienced immediate hype within the scene. Was this expected?

HAROLD GRIFFIN: I don’t think we expected anything. The inception of this band was honest and genuine — just friends hanging out making music. We never wanted to tour or take it seriously at all, but the reception was overwhelming. One of the things I think people take from us is the nostalgia element, and we are so heavily influenced by the bands we grew up listening to.

JOEY CHIARAMONTE: When we did our first EP, I was showing it to my friends who played in various bands, and they swore on their lives that there was something tangible about this band and that we should tour and make it a real thing. We were all in disbelief because when you’re making the music, there isn’t that self-awareness in real-time. Honestly, I am so glad our friends were so adamant about believing in this project because I don’t know if we’d be here right now if there weren’t so many people in our ears.

At the start of the year, the band signed to Pure Noise Records, one of the most influential labels in this scene. What has the experience been like so far?

CHIARAMONTE: Speaking on how it’s been with the label, it’s shattered my expectations. It’s been so far beyond what my predicted scope of it would be. I didn’t realize how much die-hard attachment people had with the label. With the new singles, the jump in our audience has been night and day. I’m almost losing track.

Speaking of the newest singles “Ten Digits Away” and “Straight North,” the music sounds considerably juiced up but still retains your classic rawness. How did these songs come together?

GRIFFIN: I wrote “Straight North” before COVID hit, actually. I didn’t think it would fit on Drives Out East, so we were sitting with it for a long time.

TJ ROTOLICO: “Ten Digits Away” was also a pre-Drives Out East song as well. Hilariously enough, I sent it to the band in our group chat, and no one responded. [Laughs.] When we went to New Jersey to work with our producer Jon Markson, he really made both of these songs shine.

Being at the forefront of the melodic hardcore and emo revival, why do you think this scene is having such a resurgence?

CHIARAMONTE: I think a lot of it has to do with contrast to everything that has been happening in the greater hardcore music space in the last five years. There was a big wave of heavier stuff popping off, and I think the reason stuff like us is taking is because it’s a harsh contrast to that. The most radical shift is a return to the more melodic, pop-punk-inspired hardcore stuff. The last time that was blowing up was almost 10 years ago with bands like the Story So Far and Transit. Nostalgia is a dangerous thing, but people innately fall back on what they grew up on. When the greater culture is down for mixed bills, diverse-sounding lineups ranging from heavy to soft, existing under the same rooftop, then everyone wins.

I think that is spot on. Not to mention, you’ve recently been part of a very mixed tour with Knocked Loose, Kublai Khan and Movements. Without a doubt, it seems to be working.

CHIARAMONTE: It’s working so well. Every single show has been sold out, and our band is dead center of it all in terms of musical styles. There isn’t a single snoozer of a set, no one gets skipped over and people are there truly appreciating all of it. Shoutout to Knocked Loose and their team for making sure that we always play to a full room. I am so thankful for them.

Obviously, Koyo are proud of their hometown of Long Island, which has a rich history of birthing some of the scene’s most influential bands. How does it feel to be a part of that history now, and why is Long Island so special?

GRIFFIN: It’s the greatest place on Earth. New York is the cultural epicenter of the world, so it’s no surprise that we are home to the best food, art and nature.

CHIARAMONTE: Long Island has it all. Just as a piece of geography, it’s an anomaly, and I think that inspires a lot of art.

GRIFFIN: Obviously within our conversation, it’s a little more localized with the Taking Back Sunday and the Movielife comparisons, but people also forget that some of the greatest artists in other worlds came from the same place. Some of the best rappers came out of Long Island. There’s no Mobb Deep or Public Enemy without Long Island.

You are now preparing to work on your debut LP. What are the boldest risks you want to take both lyrically and sonically?

GRIFFIN: We are at all times trying to stretch the limits of what we can do with this band while still maintaining an honest presence in the pocket we want to create. Our new material is really going to walk the boundaries of what this band can be, and we want to touch on everything possible.

CHIARAMONTE: I don’t necessarily strive to take any particular risks when it comes to lyrics, but the one thing I always try to do and continue to do is write songs about my life and lived experiences. I will only write things that come from an honest and transparent place. I refuse to write about things that have nothing to do with my life.

FOR FANS OF: The Movielife, Taking Back Sunday, The Story So Far

This story appeared in issue #407, available below.