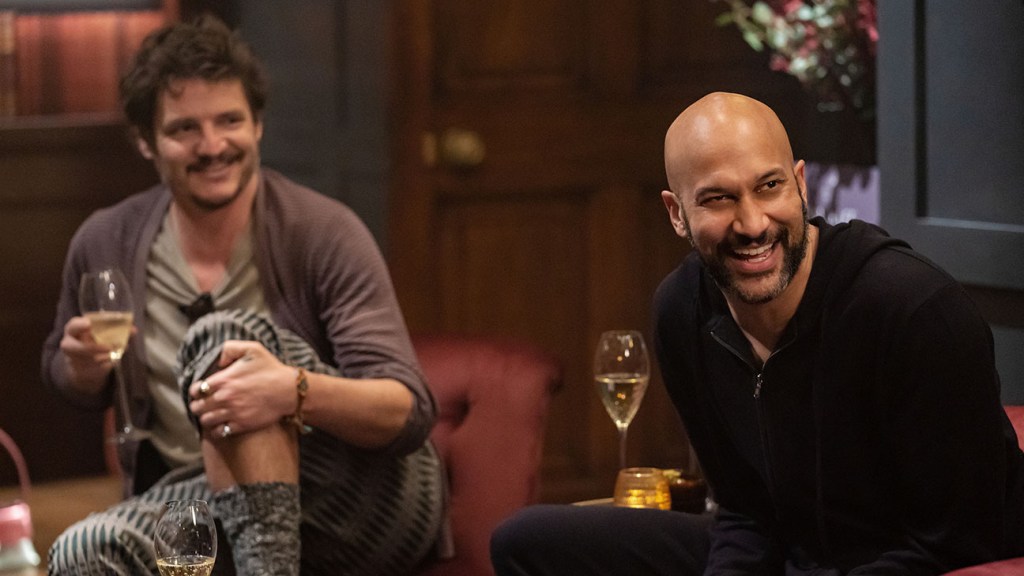 Some folks took up baking or knitting to occupy themselves during the long days and nights of early COVID lockdown. Judd Apatow grabbed a wad of Netflix cash and threw together The Bubble, a slapdash comedy with an embarrassment of misused talent. The writer-director tries to dodge criticism of his painfully unfunny parody of a pandemic film shoot by pointing out at both the beginning and the end that it’s a heroic bid for distraction in difficult times. But this sloppy attempt to harness the anarchic improvisational energy of a Christopher Guest movie ends up more of an irritant, especially after the gentle charms of The King of Staten Island.

Yes, there’s some amusement in watching David Duchovny snort coke off Keegan-Michael Key’s bald dome. But at one point Duchovny’s character, an overconfident actor with more loyalty to the sci-fi franchise he stars in than to his adopted son, says: “I’m gonna make that scene work. Because that’s what I do. I turn shit into gold.” Sadly, no one on hand possesses the alchemical power to pull off that transformation with Apatow and Pam Brady’s strained script.

The Bottom Line Bursts on arrival.

Is there anyone out there who still gets a laugh out of cringe comedy built around face masks and shields, nasal swabs, social distancing, quarantine fatigue and glitchy Zoom calls? Watching The Bubble hammers home the realization that nothing ages faster than COVID humor. Seriously, we’re all so over it that the silliness just grates. Whereas a show like White Lotus took advantage of pandemic restrictions to create something unique and original in a confined setting, Apatow’s film feels like a very tired Tropic Thunder wannabe.

The closest thing to actual laughs comes in the opening setup for Cliff Beasts, the 23rd-biggest action franchise of all time. As posters flash on the screen for this Jurassic Park knockoff about flying dinosaurs and the ragtag band of heroes doing battle with them, we see the evolution from the original, through Cliff Beasts II: Re-Extinction to Cliff Beasts 5: Space Fury, with the tagline “It’s Their Moon Now.”

When producer Gavin (Peter Serafinowicz) hastily prepares a sixth entry in a desperate attempt to make some money for a studio buckling under pandemic financial pressure, Carol is reluctant to accept. She sat out the previous installment in order to play the half-Jewish/half-Palestinian lead (she’s neither) in an alien-invasion career killer called Jerusalem Rising (I did smirk at that clip) and is concerned about bad blood with her Cliff Beasts co-stars. That turns out to be the least of her worries.

The bubble of the title is the luxury country-estate hotel and nearby studio in England where cast and crew will be isolated for the duration of the scheduled three-month shoot. That group includes clueless director Darren Eigen (Fred Armisen), a Sundance award winner for Tiles of Love, which he shot on an iPhone 6 while working at Home Depot; Serious Actor Dieter Bravo (Pedro Pascal), slumming it for some quick cash; and Krystal Kris (Iris Apatow), a TikTok sensation whose 120 million followers the studio hopes will expand its audience.

While Iris Apatow is among the more appealing members of the overstuffed ensemble, partly because she’s one of the few not constantly trying too hard, Krystal’s main function is to allow for TikTok dance routines to be dropped in when the comedy is floundering.

The same goes for Beck, who pops up on one of several Zoom calls with studio head Paula (Kate McKinnon). While Paula mostly lobs passive-aggressive threats at Gavin from various vacation retreats around the globe, she recruits Beck to boost flagging morale as the shoot drags on; the singer’s cover of Kool & The Gang’s “Ladies Night” provides another dance break for the cast. Other star cameos are scattered throughout, yielding little beyond the recognition factor.

The assumption appears to have been made early in the development of The Bubble that just lumping a whole bunch of skilled comedy performers together and having them go stir-crazy as their confinement stretches on and on would be both hysterical and relatable to the rest of us numbed by pandemic tedium. It’s not. The jokes are feeble, the improv is uninspired, the digs at high-maintenance actors are old, and the scenes of actual Cliff Beasts production don’t come close to the endearing quality of the best (or worst) Syfy schlock. There’s none of the wit, warmth or affectionate skewering of genre tropes that makes a film like Galaxy Quest such a standout among sci-fi meta spoofs.

Greenscreen has never been the natural domain of Apatow’s comedy, and this isn’t going to change that, despite a marathon end-credits list that would suggest far more impressive visual effects than anything on display. Even a robust John Williams-style score by Michael Andrews and Andrew Bird can’t breathe life into the plodding sci-fi scenes on a scorched Everest.

There’s also a depressing lack of cohesion among the cast, whose distinctive comic talents are seldom integrated effectively. So while Maria Bakalova has sweet moments as a hotel desk clerk propositioned by Dieter, and Harry Trevaldwyn is an agreeably impish presence as the underqualified COVID protocol officer, they all seem to be in different movies. In another universe, you can imagine this film as the kind of sharply satirical microcosm comedy that was a Robert Altman specialty. But that would be a galaxy far, far away. One with actual plotlines.

Apatow and Brady’s script heightens the anxiety by having Gavin bring in an overzealous security officer (Ross Lee) to stop the mutinying actors from escaping. But this is no less a comedy dead end than Sean’s lifestyle brand, “Harmony Ignite,” or recently divorced couple Dustin and Lauren’s rekindled romance and co-parenting issues. The nominal central thread involves Carol’s attempts to rebel against studio tyranny and the consequent humiliating downsizing of her part, as the younger, more bankable Krystal’s is beefed up.

The big twist involves the mistreated EPK guy, Scott (Nick Kocher), who’s forgotten for such long stretches of the movie that his triumphant redemption becomes just another desperate attempt to squish the whole mess into a story. None of it amounts to more than half-baked sketch ideas in a film that’s staggeringly inept considering the resources involved. The Bubble was meant to be a pandemic lark, a fun antidote to the virus. But it’s a cure for nothing.

2022-03-31
Previous Post: Chris Rock’s history with Will Smith, Jada Pinkett Smith: A look at the stars’ relationship through the years
Next Post: Red Hot Chili Peppers Unveil ‘These Are the Ways’ Video