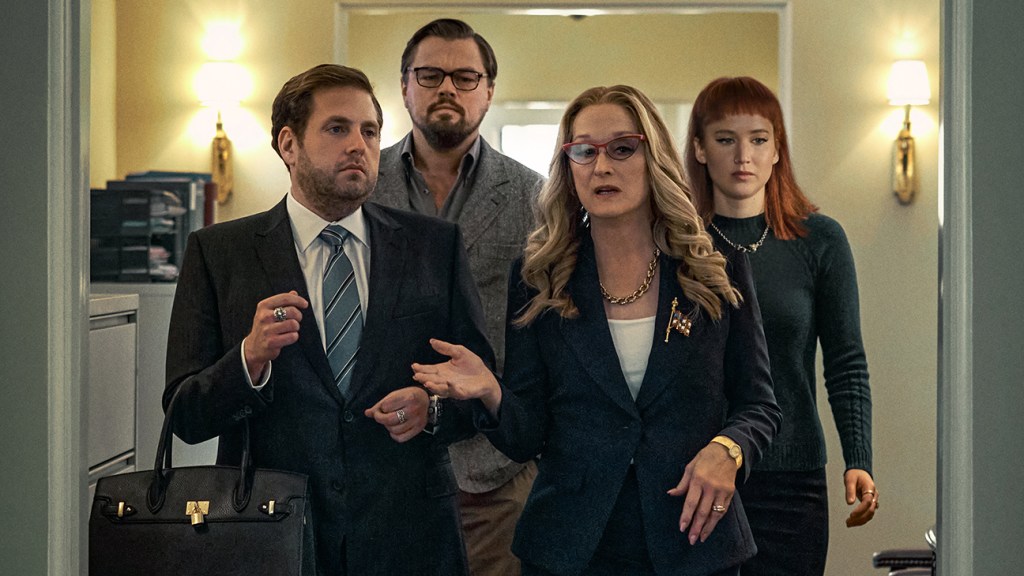 When watching Don’t Look Up, Jonah Hill’s character can be seen toting a Hermès Birkin handbag. The actor admits the accessory was his personal choice.

In an interview for W’s Best Performances issue released Friday, the actor discussed his character’s luxe accessory and getting starstruck by Meryl Streep. In the Adam McKay film, Hill portrays the son and the chief of staff of Streep’s President Janie Orlean, a role he described as “if Fyre Festival was a person and that person had power in the White House.”

“He’s in a suit because he works in the White House, but I gave him a Birkin because he’s kind of emulating his mother,” Hill said of why he improvised the handbag as an accessory. “A lot of these people worship their dads, and I thought it was cool that he worships his mom. He always calls his mom a ‘total rock star.’ Isn’t that awesome?”

Hill’s Birkin choice wasn’t the only preference made for a role in the film. Don’t Look Up costume designer Susan Matheson has revealed that Timothée Chalamet requested his mullet hairstyle to resemble that of Tiger King’s Joe Exotic.

Though starring alongside a cast of friends, in particular Leonardo DiCaprio, Hill admits he was starstruck when meeting Streep. “I maybe shook her hand a couple of times,” he said. The two were quick to form a “superclose dynamic,” with Hill explaining that Streep’s work ethic was notable.

“She’s so awesome: as a person, as a professional, as an artist,” he explains. “She was there rehearsing after I left. She was there before me. She’s like in beast mode all the time, and cool. We would talk a lot and hang out, so the intimidation goes away pretty quickly.”

While working on the film, Hill says he lived with DiCaprio, and they would spend their time watching films. However, Hill admits there was one show in particular DiCaprio tried to get him to watch that he wasn’t fan of. “Leo made me watch The Mandalorian when we were making Don’t Look Up, and it was like, Baby Yoda was so cute, but I just didn’t give a fuck because I didn’t know anything that it was about,” he said, also explaining that he doesn’t normally watch sci-fi.

In addition to Don’t Look Up, Hill also reflected on another one of his memorable roles: Superbad. When asked whether he’d participate in a sequel to the 2007 film, the actor reveals he already has a vision for what it would be. “I haven’t pitched this to anybody. What I want to do is when we’re like 80, do a Superbad 2. Like, ‘old-folks-home Superbad.’ Our spouses die, and we’re single again. That’s what I want Superbad 2 to be, and that’s the only way I would ever make it.”