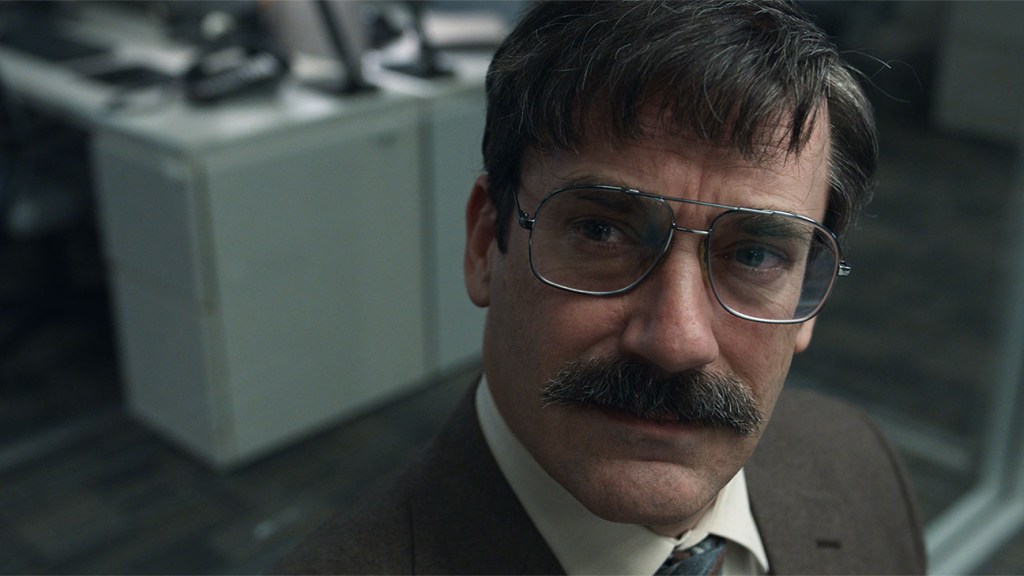 Kafkaesque tales, even those written by Kafka, tend to work better on the page than the screen. That’s made evident yet again by Joachim Back’s ambitious cinematic adaptation of Jonas Karlsson’s acclaimed existentialist novel The Room, receiving its world premiere at the Tribeca Film Festival.

Retitled Corner Office (presumably to avoid confusion with Tommy Wiseau’s immortally bad cult classic), the film features a fascinating premise that unfortunately wears thin over the course of its feature-length running time. But it does provide the opportunity for Jon Hamm to demonstrate his gift for deadpan comedy.

The Bottom Line More fun in theory than execution.

In this film, Hamm returns to the sort of office setting that marked his breakout role in Mad Men, but this is a very different office indeed. Housed in a brutalist architectural structure that wouldn’t be out of place in Soviet Russia, it’s the headquarters of the less than subtly named corporation The Authority, Inc. (just in case you don’t get the symbolism). The company’s newest employee is Orson (Hamm), whose name may or not be an homage to Orson Welles, who made the screen version of Kafka’s The Trial.

Orson, who narrates the proceedings throughout, instantly develops a distaste for his office colleagues, offended by such things as their lackadaisical work habits, their sloppy attire, and even the lack of credibility of a young child’s drawing depicting the sun on one of their desks. Determined to be “a person to be reckoned with,” he prides himself on his work ethic, hewing to a strict hourly schedule of 55 minutes of intense work followed by a five-minute break. If he has to go to the bathroom, he holds it in, considering the ensuing discomfort to be “character building.”

Orson’s standoffishness and superior attitude alienates his colleagues, especially Rakesh (Danny Pudi), with whom he shares a desk and whose ever-growing piles of paper threaten to invade Orson’s space. Meanwhile, Orson is chagrined when he’s upbraided by his boss (Christopher Heyerdahl) for not obeying the “Think About the Floor” sign and failing to cover his snow-encrusted shoes with the provided plastic booties.

It isn’t until Orson discovers an empty, elegantly appointed, wood-paneled office that he finds momentary contentment. Retreating there whenever he can, he discovers that it provides an inner peace that enables him to do his best work, resulting in kudos from his boss and the never seen “EVP” upstairs who truly controls things. His newfound status only increases his co-workers’ resentment. More problematically, none of them can see the apparently magical office that serves as Orson’s refuge, which results in him being sent to the office shrink.

The storyline’s strained allegorical conceits might be more entertaining if Orson were a more relatable character. Unfortunately, he’s depicted as a pretentious bore, reducing our identification with him as an Everyman desperately yearning for self-identity. It also reduces our emotional investment in his possible romantic relationship with the company’s beautiful, friendly receptionist (Sarah Gadon), whom he takes to his hidden refuge in one of the film’s more fanciful fantasy sequences.

Very little actually happens in the story, which might have been better served as a short film. Nonetheless, it exerts a certain fascination, thanks to the strong sense of oppressive atmosphere delivered by director Back, working from the screenplay adaptation by Ted Kupper. Particularly striking are the repeated overhead shots of the company’s snowy parking lot, with a solitary Orson shown trudging to and from the office like a worker ant. A dramatic plot development in the final act leads to a chaotic foot chase between him and a pair of security guards, which plays like a combination of Buster Keaton and Samuel Beckett.

Hamm inhabits his role to perfection, never winking to the camera to let us know that he’s in on the joke and unafraid to make his character as off-putting as possible. He also plays against his leading man-looks, demonstrating yet again that — provided with a suitably unflattering wig, unfashionable glasses and a truly horrible moustache — even the handsomest of actors can be made to look unattractive. But he’s undone by the monotonous material, his natural charisma inhibited by the one-note character.

Corner Office succeeds all too well in conveying the deadening effects of office work, practically serving as a testimonial to the pandemic-created trend of working from home. By the time the film’s over, you’ll be desperate to find a place of peaceful refuge yourself.