Japanese Breakfast is offering up another taste of forthcoming third full-length Jubilee with “Posing In Bondage.” The latest from Michelle Zauner’s project tackles loneliness head-on in a breathtaking visual directed by the singer.

In addition to the reflective new track, Japanese Breakfast has also unveiled a list of tour dates set to kick off this fall.

Following the release of “Be Sweet” in March—which she later performed on The Tonight Show Starring Jimmy Fallon—“Posing In Bondage” is the perfect follow-up to show off Zauner’s diverse sound. With expansive instrumentation from Wild Nothing’s Jack Tatum, Zauner’s poignant vocals highlight the relatable lyrics of someone trying to find their way.

Set in an empty grocery store, the track is an enchanting commentary on loneliness, which Zauner knew could be perfectly captured in that setting.

“‘Posing in Bondage’ is a ballad about loneliness and longing, a song about two people who want so badly to connect but are never quite able to do so,” Zauner says in a statement. “No place felt lonelier than an empty grocery at 1 a.m. The video is actually an epilogue to the one that will accompany our next single, here presented out of order.”

Read more: 10 Japanese pop-punk bands who are prominent forces in the genre

Directed by and starring Zauner, Girlpool’s Harmony Tividad appears opposite the singer as the grocery store cashier. Following the visual’s release, Zauner shared how she “literally gasped when [she] saw [Tividad] on 16mm [film].”

Tividad also took to Instagram to thank Zauner and share some behind-the-scenes shots of the duo eating instant noodles.

In addition to Tividad, Zauner also worked with executive producer Evaline Huang and producer Carine Teoh. Director of Photography Adam Kolodny also returned to work with the singer after teaming up on past releases such as “Be Sweet,” “Boyish,” “Road Head” and “Everybody Wants To Love You.”

With nods to the title of Jubilee throughout, see if you can spot them in the “Posing In Bondage” video below.

Japanese Breakfast’s tour kicks off Aug. 7 in Philadelphia and wraps up Oct. 10 in St. Louis with Luna Li appearing as support on most dates. Tickets go on sale beginning April 16 here, and you can see the full list of shows below.

Ahead of the clip’s premiere on April 8, Zauner hosted her first YouTube live for a Q&A session with fans where she revealed this is one of her favorite videos to date.

As mentioned previously, the visual is part of a larger story connecting to the next single’s video, which Zauner reveals will be the last preview before the album.

“This ended up being an epilogue that comes before another video. I saw a question [asking] if there was going to be another single, and there is going to be one more single before the album releases on June 4, and I can’t wait for you to see it. It is epic. I think it’s maybe our best video yet.”

The vocalist also jumped into the meaning behind the album name and how it extends to the cover art as well. Following 2016 debut Psychopomp and 2017 follow-up Soft Sounds From Another Planet, Zauner reveals she was looking to approach her next album differently this time.

“I named the album Jubilee because it is an album about joy,” she begins. “I knew very early on that I wanted the theme to be joy, and the color yellow was very important to me. Jubilee is a year of release, and I felt like after writing two albums about grief and trauma and suffering, I wanted to write something on the total opposite end of the spectrum. I just felt really ready to embrace feeling in this new way, so all of the songs are about joy or embracing feeling in some way.

“The fruit on the cover art, persimmons, which are a pretty popular fruit in East Asia at least. In Korea and Japan, and I think Taiwan, they will hang the persimmons. They’ll peel them, and they’ll hang them. They start off as very vibrant, but you know [a] really hard, tough, bitter fruit. They’ll mature into sweet, soft, dried fruit, and I thought it was a really lovely metaphor for—for being known for this sort of narrative of grief and sadness and letting my environment mature me into something sweeter.”

In addition to the new album, Zauner’s highly anticipated book based on her 2018 New Yorker essay, Crying In H Mart, is due out April 20. The memoir touches on growing up Korean American and the loss of her mother and is available for preorder here.

Jubilee is out June 4 via Dead Oceans, and preorders are available here. The album artwork featuring the metaphor-filled persimmons and full tracklisting is available below. 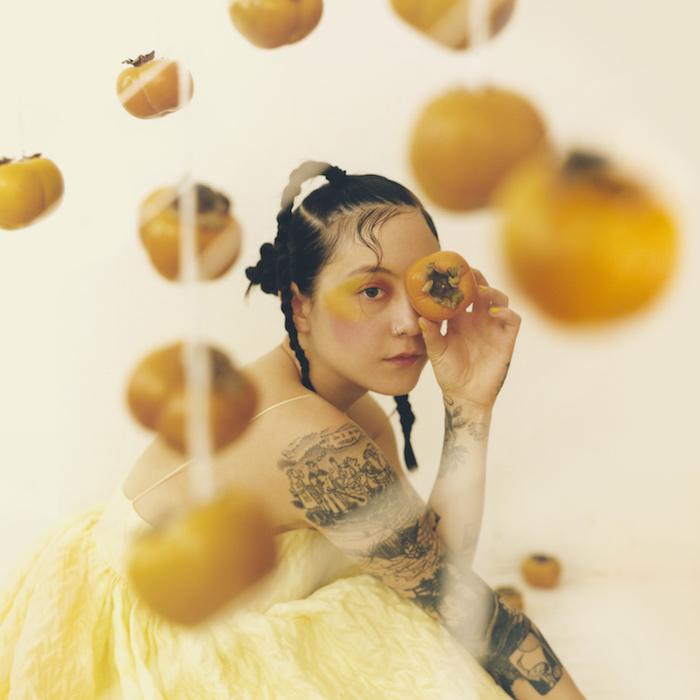 2021-04-08
Previous Post: 15 artists who would rock a collab on blink-182’s next record
Next Post: Ted Nugent Wants to Know Where the Shutdowns Were for COVID-1 Through COVID-18 — No, Really