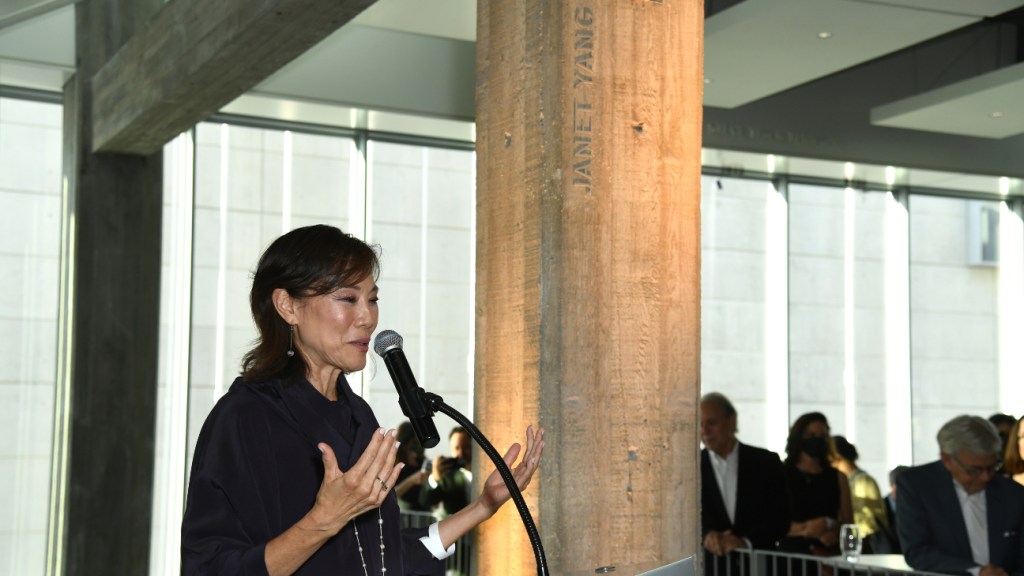 Janet Yang, the veteran Hollywood producer who has been described as “the godmother of Asian-Americans in the industry” — and who is rumored to be a candidate to succeed David Rubin as the president of the Academy of Motion Picture Arts and Sciences’ board of governors, on which she has served as a governor-at-large for the last three years and a vice president for the past year, in August — was feted on Tuesday evening at the Academy Museum of Motion Pictures, where a pillar was dedicated and a dinner was held in her honor.

If Yang — the daughter of Chinese immigrants who made her name connecting the Chinese and Hollywood film industries before serving as a producer on films like The Joy Luck Club and The People vs. Larry Flynt — wasn’t planning on seeking the presidency of the Academy’s board prior to Tuesday’s gathering, she would be crazy not to after it, given how many industry power-players came out to celebrate her.

The dedication of a pillar inside the Renzo Piano-designed museum — alongside other pillars dedicated to Barbra Streisand, Tom Hanks and Rita Wilson, Bob Iger and Willow Bay, Lauren Blum and Jason Blum, Christopher Nolan and Emma Thomas, JJ Abrams and Katie McGrath, Jeff Skoll and Miky Lee — was emceed by Academy Museum director/newly-hired Academy CEO Bill Kramer, and, like the dinner that followed it, was made possible by a donation from Julia S. Gouw, the retired president and COO of East-West Bank who now serves on the Academy Museum’s board of trustees.

The dinner, which featured a buffet of Chinese food, was attended by numerous Academy governors and other notables ranging from the legendary 93-year-old actor James Hong to Katherine Ho, the singer whose cover of Coldplay’s “Yellow” was featured in Crazy Rich Asians. Speakers included Kramer; Rubin (on behalf of both himself and outgoing Academy CEO Dawn Hudson, who was unable to attend after contracting COVID); GoldHouse CEO and co-founder Bing Chen; California State Treasurer Fiona Ma; Jim Henson Company CEO Lisa Henson; and the actor Daniel Dae Kim, who said of Yang, “It’s only fitting that it’s a pillar that she’s receiving, because she’s been that for so many.”

Yang, a longtime Academy member who became more heavily involved with the organization’s diversity push in the wake of a 2016 Oscars sketch in which Chris Rock used Asian children as the butt of a joke (which Rubin on Tuesday described as “an inappropriate and insensitive skit”), began her speech, “I am truly touched beyond my imagination.” She then joked to the audience, which was comprised mostly of people of Asian descent, “I agreed to this because I thought, ‘Well, number one, it’s an opportunity for non-Asians to experience what it’s like being a minority’ — welcome to our community, we are a wild bunch!” She continued, “Also, it was an opportunity to celebrate with so many people that I have loved in my life, that I have worked with, that have lifted me up, that have inspired me, truly. This pillar is just an excuse.” And, after narrating a slideshow of key moments from her life and career, she dedicated her pillar to Hudson and Rubin.

A brief side note: On my way in to the Academy Museum for the festivities, I ran in to the legendary songwriter Diane Warren, who learned earlier in the day that she had been tapped by the Academy’s board to receive an honorary Oscar at its Governors Awards in November. The 13-time best original song Oscar bridesmaid was over the moon, greeting me with her trademark foul-mouthed humor: “I’m not a fucking loser anymore!”

Inside the gathering, I was able to gather a bit of intel about how this year’s four Governors Awards honorees — Warren, Michael J. Fox, Euzhan Palcy and Peter Weir — were chosen by the board. I’m told that short films/feature animation branch governor Bonnie Arnold suggested Fox for the Hersholt — the Back to the Future star who has never even been nominated for a competitive Oscar — and the idea was met with overwhelming approval. Directors branch governor Ava DuVernay championed Palcy. And the three music branch governors led what was ultimately a unanimous push for Warren to finally receive recognition; they clearly had their act together, as her nomination was the only one accompanied by a brief video presentation to help make the case. It worked!

2022-06-21
Previous Post: Pin-Ups for Vets model Janae Sergio recalls surviving homelessness before joining the Navy: ‘Be your own hero’
Next Post: Dave Chappelle declines to have high school’s theater named after him over backlash to comedy special