If You Loved Anthony Bourdain, You Should Read ‘World Travel’

Anthony Bourdain was not like most travel hosts on TV. Despite his huge international profile, Bourdain, who died in 2018, performed his role as a guide and an outsider with a sense of humility; he would enthusiastically try anything once, and he’d listen to the locals about the eating and lifestyle habits of wherever he was visiting. Bourdain seemed at his most comfortable while eating street food and drinking a cold beer outside with new friends, and he could make anyone—even President Obama, with whom he shared noodles in Vietnam in 2016—see the joy in those experiences.

His book World Travel, out today, is the written culmination of his adventures, his distinct outlook on the world, and his influence on the people who learned from him. Like a troublemaking friend who always has the best stories, Bourdain was brash and, at times, unfiltered, but in a charming way. Through this self-described “irreverent guide,” we can see foreign destinations through Bourdain’s perspective once again. Who else would have described scorching, tingling Sichuan food as blowing your palate out like “the flavor equivalent of a weekend at Caligula’s house,” or Spanish tinned fish as so mind-blowing that it bears no resemblance to “the can of smoked oysters you ate, stoned and desperate, at two in the morning back in college”? 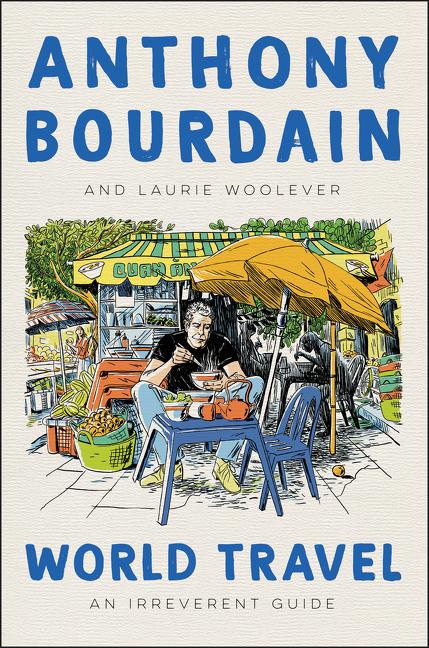 Though Bourdain’s name takes top billing on the cover, World Travel—which is the final book from the beloved chef, travel host, and author—owes its completion to his longtime assistant Laurie Woolever. As she explains in the introduction, in the spring of 2018, Woolever recorded as Bourdain chain-smoked and recalled the foods, places, and people he loved all over the world. They’d planned for that conversation to be a starting point; Woolever would transcribe and figure out what to flesh out while Bourdain traveled for Parts Unknown, then Bourdain would write essays about his experiences. Months later, Bourdain died by suicide in France.

Before beginning the project, Woolever had been hesitant: Bourdain was busy, and there were more than enough travel guides. After his death, she felt new qualms. “It is a hard and lonely thing to coauthor a book about the wonders of world travel when your writing partner, that very traveler, is no longer traveling the world,” Woolever writes. “And, to be honest, in the difficult days and weeks after his death, I once again found myself asking, ‘Does the world need this book?’”

Even before the pandemic, travel guide books like this one were already anachronistic, replaced by free online content and Instagram geotags that serve as real-time recommendations feeds. Amid COVID-19, businesses are closing and opening faster than books can keep up, and from travel influencers to TV hosts, there’s no shortage of people telling you where you should go and why. Hardcover and large, World Travel is not the type of book you toss in a bag while shuttling between new places, and in a mid-pandemic world, at least one place mentioned has closed since the book’s publication, Woolever told the New York Times.

There’s value in World Travel, though. Although new hosts have entered the food-travel space in recent years, Bourdain’s success still hangs over the genre. Whether it’s Zac Efron’s Down to Earth or Gordon Ramsay’s Uncharted or Stanley Tucci’s Searching for Italy, these shows are framed in terms of Bourdain’s work and the standards he set for food-travel TV. To date, nobody has earned the same stature, and maybe nobody will. World Travel is for the people who don’t want the new Bourdain, whoever that may be, but who would rather spend more time in the world Bourdain experienced.

An ode to and an anthology of Bourdain’s perspective, World Travel is like a collector’s item for Bourdain’s biggest fans. In addition to his spoken notes as collected by Woolever, there are stories from people who knew him best. The essays Bourdain originally intended to write for the book never happened, but the multiple perspectives World Travel provides give us a broader picture of Bourdain’s legacy instead. Toronto restaurateur Jen Agg explains her skepticism and later appreciation for appearing on Bourdain’s The Layover, which was a boon for her restaurant The Black Hoof; production manager Nari Kye writes about how working with Bourdain on No Reservations “fundamentally changed” her perspective as a creative for the better.

Like his shows, the book is something you can return to for a dose of brief escapism. Flip from a tour of New Jersey to a guide to Sri Lanka. We’ve all been fantasizing about different scenarios and far-flung places over the course of the past year. Through World Travel, our wanderlust can continue—now, guided by Bourdain’s voice.

World Travel: An Irreverent Guide is available today through HarperCollins, Bookshop, or your local bookstore.