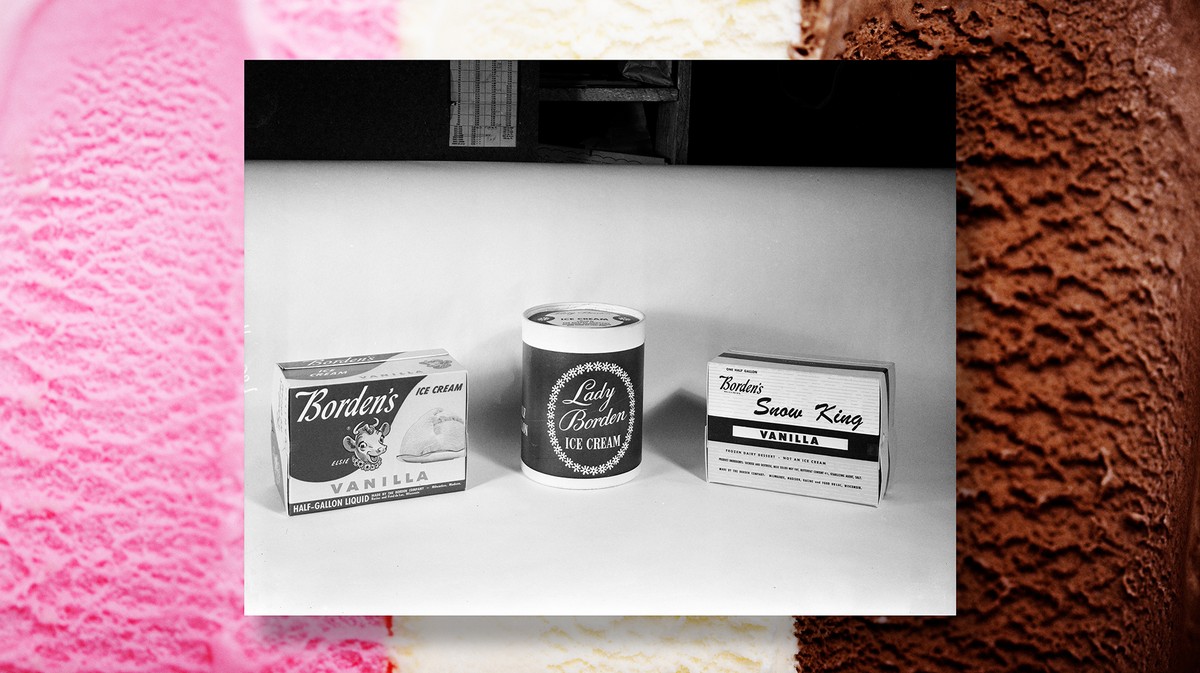 You’re certainly familiar with the shape of a pint of ice cream. But it wasn’t always that way.

In the earliest days of commercial American ice cream making, the frozen dessert came in large metal cans. This was because people didn’t really eat ice cream at home, but rather at soda fountains and ice cream parlors—popular public spaces during the Progressive Era and Prohibition. But after the rise of refrigeration in the 1930s, customers started stocking ice cream at home, and the treat became synonymous with small, rectangular paperboard cartons. Beginning in the 1930s—as Rachel Hunnicutt, a design history and theory lecturer at Parsons School of Design, put it—“the square was king.”

That had a lot to do with how ice cream was made, Hunnicutt said. As we can see in a video from a Breyers Ice Cream plant in the 1940s, large blocks of frozen ice cream would float down conveyor belts to machines, which would drop them into paper half-gallon and pint boxes. “When I was a kid growing up, that’s the way we had our ice cream in the mid 60s,” said Murray Bain, vice president of marketing at the food and beverage packaging manufacturer Stanpac.

Look on shelves now, though, and that’s no longer the case. Though round containers had already been used for decades, Hunnicutt said that by around the 90s, boxes of ice cream had largely given way to cylindrical pints with circular lids as well as half-gallon tubs, in a rounded but vaguely rectangular shape that came to be known in the industry as a “squround.” By 2003, the trade publication Dairy Foods called the squround “the king of cartons,” writing that “in recent years, it [had] been given an unofficial coronation as the best all-around package for take home sales.” So where did boxes of ice cream go, and why?

According to Bain, the shift happened in part because the modern designs of rounded containers simplify production. Unlike boxes, which had to be assembled prior to filling, cylindrical pints and squrounds arrived at the plant, ready to go. Consumer preference played a big role, too. Ice cream could be scooped more easily from a rounded tub, and aside from establishing more tamper-evident packaging, modern lids on rounded containers could be removed and replaced; cartons, meanwhile, opened on both ends, leaving the dessert more vulnerable to freezer burn. There was also the problem of “knuckle muck,” the AP claimed in 2002, referring to the mess that got on your hands as you dug a spoon into the deep corners of an ice cream box.

Science seems to favor the cylinder as well: “Square pints will melt quicker than cylinder ones, because there is more surface area in a square pint,” said Ruben Porto, the ice cream maker behind the site Ice Cream Science. “The greater the surface-to-volume ratio, the faster heat will be transferred from a relatively warm room to the ice cream, which increases the melting rate.”

That doesn’t mean that people don’t miss the square. On sites like eBay and Etsy, you can find that old packaging from vintage resellers; on the former site, for example, I stumbled upon a combination pack of two paper half-pints and a plastic half-gallon box used by Breyers in 1966, listed for $70. And as the artisanal ice cream boom over the past decade has crowded freezers with all manner of ultra-premium, small-batch, dairy-free, lactose-free, plant-based, and/or uber-expensive pints, some ice cream producers, looking to stand out, have been reviving the box of ice cream. The ice cream shop where I worked for a few years did this very thing, and every so often, I continue to see other versions pop up online.

“We decided to do square pints immediately,” said Katie Heldstab, who co-owns Leona’s Ice Cream in Pittsburgh with her wife Christa Puskarich. “That was kind of the only way we wanted to do it.” Though this was the plan from the start, after they opened Leona’s in 2013, they spent their first few years focused on lactose-free ice cream sandwiches, with flavors like black sesame ice cream on salted tahini chocolate chunk cookies or coffee ice cream between snickerdoodles. They got the pints off the ground in 2017 and now sell them wholesale to coffee shops, breweries, and grocery stores in the Pittsburgh area. The response from shoppers, Heldstab said, is that the squares are “very cute.”

For Leona’s, one factor behind the decision was “standing out in a sea of round containers,” Heldstab said. Another was space: Boxes fit edge-to-edge without the lost inch of footprint between round pints, which was crucial for maximizing their product on shelves. But nostalgia was also a crucial part of the shape’s appeal. Heldstab and Puskarich had both grown up on boxed ice cream, which was more affordable for their families, and they hoped to evoke that feeling with Leona’s offerings.

Not only do square packages evoke pleasant ideas of bygone ice cream parlors and soda fountains, but ice cream is inherently nostalgic, Hunnicutt said; in fact, ice cream was considered such crucial food for morale during World War II that, in 1945, the U.S. Navy spent $1 million on a barge that distributed ice cream to soldiers. In the book Much Depends on Dinner: The Extraordinary History and Mythology, Allure and Obsessions, Perils and Taboos of an Ordinary Meal, writer Margaret Visser explains that ice cream has the power to bring up childhood memories—creating a sense of security and innocence—as well a nostalgia for the idea of “Elsewhere.” That sentiment is understandable, especially today.

“It’s this little brick of joy.”

In the early days of Leona’s, Heldstab recalled seeing this type of packaging from the now-defunct Brooklyn-based ice creamery Hay Rosie, which sold pint and half-pint boxes with a branded wooden spoon. Despite that example, Heldstab had a hard time finding resources that explained how she could do it herself. Though cylindrical pints are easy to buy in bulk from manufacturers, ice cream-friendly cartons aren’t. The answer is going custom. But, as Hay Rosie wrote in a 2014 blog post, that can be expensive, especially for small businesses. “It took significantly longer than I had allocated for it in my process,” Heldstab said with a laugh. Eventually, they found the Pittsburgh creative studio Bootstrap Design, which created the custom square pints Leona’s uses today.

To Heldstab, the distinctiveness of the design helps buyers understand that they’re getting something thoughtful and high-quality, even if the ice cream is lactose-free. With a high butterfat percentage and low aeration, Leona’s product fits into the FDA’s top tier for ice cream labeling: the “superpremium” category. “I think people feel like it’s extra special,” Heldstab said. “It’s this little brick of joy.”

Though companies like Leona’s are reviving the format, it can still pose challenges—mirroring the issues that caused the industry to pivot away from boxes in the first place. Heldstab, for one, acknowledges that the choice can make things more labor-intensive. Unlike round pints, which show up at shops in ready-to-fill stacks, the boxes must be assembled manually; and when you’re filling hundreds of pints a week, that takes considerable time.

The pandemic has presented an additional problem: Printing and delivering the boxes used to be a two- or three-week turnaround; now, it’s more like nine, Heldstab said, with that crunch only worsening as businesses ramp up post-lockdown. As a result, they have to be extremely conscious of inventory; each pint matters more when they’re in tight supply.

Brian Smith and Jackie Cuscuna had a similar vision when they started Brooklyn’s Ample Hills, the beloved ice cream company they ran from 2010 until 2020. Obsessed with ice cream history, they’d search eBay and Etsy to buy old advertising and packaging, including vintage pint cartons for Bing Crosby-branded vanilla ice cream.

In 2015, Ample Hills was entering a period of rapid expansion (eventually, they’d collaborate with Disney), and Smith and Cuscuna began prototyping paperboard boxes for rectangular pints. But they found the manual labor required for folding them to be too large a hurdle. “We determined that there was no growth opportunity,” Smith said. “We could do, you know, a few hundred pints a day that way, but we were never going to be able to build a business out of it.”

After a few false starts and stops in the packaging process, Smith and Cuscuna found a Turkish company that could design and produce a nesting, rectangular plastic container. Ample Hills launched these pints in 2018. Aside from playing on nostalgia, the boxes came with the benefit of allowing more room for storytelling. While a cylindrical pint has one continuous surface, the multiple panels of a rectangle allow for scenes like a comic strip—an example of which can be seen in the company’s Mickey Mouse-themed collection from that year.

Ultimately, that option was short-lived. A Marker report from earlier this year detailed how Ample Hills’ rapid expansion—including the creation of New York City’s largest ice cream factory—led them to file for bankruptcy in 2020. (The company’s trustees sold it to a manufacturer in Oregon last summer.) In telling the story of Ample Hills’ rise and fall, the article briefly mentions the pints as a point of tension in the company’s growth, reporting that they caused “pushback” from staff because they were difficult to fill and prone to faster melting. Smith, who takes issue with that report as a whole, disagrees with that characterization. “Our goal was to try to innovate—was trying to do something that was hard,” he said. “We failed, but we didn’t fail because of pushback.”

Even if the pints weren’t the reason Ample Hills didn’t work out for Smith and Cuscuna, they did pose problems. To Smith, it boiled down to a technical issue: The company that made the custom rectangular pints for Ample Hills wasn’t the same company that made the custom machine for filling the rectangular pints, and the specs of the two elements didn’t work seamlessly together. This left Ample Hills with lots of wasted pints, he explained. “I still 110 percent believe in the concept of [rectangular pints],” Smith said. “[But] when you’re doing something different, everything is custom, and with that customization comes an infinite world of challenges.”

This summer, Smith and Cuscuna will start over in Brooklyn with an ice cream shop called The Social. Would Smith ever consider pursuing the boxed pint again? “I think it’s conceivable, but it’s not something we would address lightly,” he said. And though those square and rectangular boxes sure are cute, there seem to be ample reasons why the style fell out of fashion.

2021-05-04
Previous Post: Kristen Bell reveals she, Dax Shepard keep drug tests at home, can test ‘whenever’ after relapse
Next Post: 10 alternative songs that explore the highs and lows of mental health