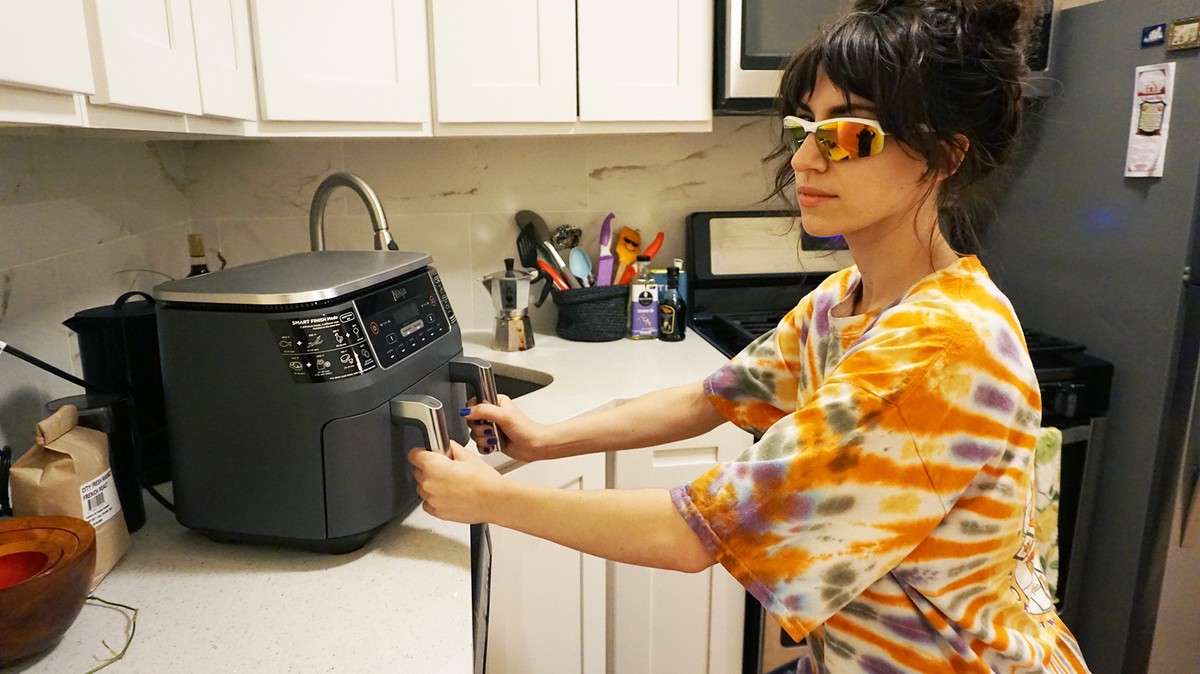 Let me explain! Pardon the eyeful of hullabaloo. But I’d really like to communicate where I am in my half-baked, fully sincere venture into the world of air frying. First and foremost, I’m new here. I’m excited to be here!

If you’re also new to air frying, fret not. Like myself, you might’ve heard e-whispers of the many dedicated air-fryer converts using these strange, newfangled devices to flash-fry everything from asparagus to zeppole, or you may have caught wind of folks who are writing entire books about how air fryers have changed their lives. “Every single day,” writes Bria Celeste, author of Air Fryer & Me: An Airfryer Recipebook, “I look in my fridge and ask myself: ‘Can I air-fry this?’”

I should also preface that I’m a technologically illiterate she-pigeon who burned my fingerprints off of my left hand after getting them stuck in an oven rack in high school (leading to a short-lived nickname, “the lobster,” because of my bandages), so I DID NOT COME HERE TO PLAY. I came here to get saved and transported to fried, Adult Easy Bake Oven heaven by the Hot New Robot in town.

Initially intimidated by my air fryer—not just any Ninja, but the “Ninja DZ201 Foodi 6-in-1 2-Basket Air Fryer with DualZone Technology, and Eight-Quart Capacity”—I spent the good part of a week just avoiding eye contact with it… just me and the Monolith, not talking by the morning coffee pot. The Ninja does come with a handy bible of not only instructions but also recipes, though I found the wealth of internet and YouTube tutorials to be a great start instead; examples: from a video by a kindly goth, “AMAZING AIR FRIED TWINKIES THAT WILL MAKE YOUR MUNCHIES DISAPPEAR FOR YOUR HIGH A$$!!” to this dude, whose voice I would like as a sound machine that says “pretty darn good fries” on repeat:

The time came to really give it a go, but I was feeling overwhelmed, so I assembled a Fellowship of the Ring that includes (but is not limited to): a frozen burrito, rainbow cookies, Swedish pancake mix, gooseberries, and of course, our star of the hour: the “Ninja DZ201 Foodi 6-in-1 2-Basket Air Fryer with DualZone Technology, and Eight-Quart Capacity”:

To me, the principle behind air frying seemed like a deceptively simple abracadabra situation. How TF could I make (perfect) sunny-side up eggs by cracking them in a drawer and walking away? What stage of my REM cycle imagination logic is this? The prospect was thrilling, but unsettling. Anyone who remembers the deep cut Disney Channel Original Movie Smart House, in which an AI home system (who is basically… a projector?) gets a lil too comfy, will understand:

I should also preface this experiment, one more time, by saying that I enjoy cooking and baking. I’m not as actively into either as I’d like to be these days, because wHo hAs tHe tImE??, but I know how to make Austrian schnitzel, make a decent béchamel sauce, and have a few good bean tricks (I’m also a vegetarian) up my sleeve. And the more I considered all the purported benefits of air fryers (a healthier, time-saving, MAGIC alternative to traditional oil frying), the more I wanted to push my fry fantasies to the limit with the Ninja, which is basically the Tesla of air fryers; not only does this robo baby have two baskets for frying, but it also reheats, broils, roasts, bakes, and dehydrates all your goods.

“True to its name, the air fryer operates by circulating hot air around a basket of food, basically heating up the food so that it tastes fried, but without using any oil,” wrote Koh Ewe in an earlier VICE examination of whether air fryers are as healthy as they purport to be. Ewe took an excellent, structured dive into air frying broccoli, tofu, gyoza and other staple tasties, to provide a solid framework for people who are interested in the health and taste-based logic of air frying.

This is not that kind of dive. This dive is a somewhat delusional, but entirely heartfelt, exploration of the fantasy and joy that air frying can potentially bring into our quarantine bellies and brains.

What would happen, if I took some items from my honest-to-goddess food pyramid (beans, Flaming Hot Cheetos, and mayonnaise; American-Italian cookies, fruit, and Tapatio) and plopped them in the air fryer? I was envisioning something akin to the energy of that one Spongebob Squarepants episode:

There was truly only one way to find out. I do advise giving the fryer a goooood scrub and empty-fry before frying your own stuff; otherwise, your first batch of whatever will just make the house smell like a boiled car dealership. Anywho, here are the fruits of everything I’ve lucid-dreamed about air frying:

My, what a coy burrito

The first thing I noticed was that the Ninja sounds like a Prius when it’s frying, and for some reason, that made me feel safe, which is cool. (It also did not blow a fuse in my house, which is apt to happen in New York City apartments with a lot of stuff plugged in.) I plopped in this frozen Amy’s burrito at 390 degrees Fahrenheit for five minutes on each side. Upon flipping it, I noticed my tortilla-wrapped jewel had become half-unwrapped and hardened, like a come-hither shard. Weird, but I was into it. Tapping open my burrito like crème brûlée was a cursed sensation I’ll never forget.

I just miss the fairground

When I moved to New York, I fell in love with Italian-American cookies. My present roommate and dear friend also grew up in Long Island, so I also wanted to throw some rainbow cookies and Circo’s (a delicious, local family-run bakery, support if you can as they ship nationwide) butter cookies into the mix. Neither of these national treasures needs me rolling them in pancake batter and Panko breadcrumbs, but here we are.

Like so many folks, I eat hot sauce and/or Takis, as well as Flaming Hot Cheetos, every day. They are all, in combo, legitimately part of the reason I moved back to the United States from France. Again, I battered and breadcrumb’d my bounty, gave my tin foil an oh-so-light avocado oil spray for posterity, and slid these bois in the Ninja. Upon release, I gave them a dusting of Tajin and a Valentina shooting star garnish. Sadly, the Cheeto kind of evaporates into the batter, but the process sparked joy and there is still good dipping potential.

Because I want to love sunny-side-up eggs

Who doesn’t? They’re so pretty. They’re also an excellent source of protein for vegetarians, but sometimes I get freaked out by the watery white bits. I cracked two in for five minutes at 375 degrees with a kiss of avocado oil underneath, and they came out absolutely, golden-yoke perfect. A little over-cooked, but that’s my own fault. The even heat-dispensing hand of Ninja was in full tap-dance power for this one.

Just a ball of mayonnaise

One of VICE’s own suggested the idea of mayonnaise, and I loved it. My mother is Midwestern, so connecting with my family history via the mayonnaise and/or dairy highway is an honorable venture that is always encouraged. All I did was freeze some mayo in a tub overnight, do my batter-bread dance the next day, and air fry a ball for three minutes at 390 degrees. The result was perhaps not aesthetically pleasing, but an absolute delight for my palate; the mayo melted into a buttery layer in the middle of the batter, which was excellent for breakfast with creamy coffee. Three hours later, my stomach felt unwell, but it was worth it.

Sucking the life out of some fruit

Initially, I didn’t even know this new Ninja (they make a bunch of top-rated kitchen goods and especially blenders, BTW) was also a dehydrator. To be clear, a dehydrator just dries out your food so you can go full upper-to-middle-class-Central-Coast-Democrat-mom with your snacks. You can dehydrate stuff in an oven, but it takes aaallll day. The Ninja does it in four to eight hours, depending on what you’re dehydrating. I put in some sliced apple, ginger, and gooseberries before bed, and awoke to what I can only describe as the most flavor-packed medley of fruit and flavor that I have ever experienced from dried food. The ginger was so tasty and zingy, it made me drool.

Rating: 1000000/5 for flavor, ease, and because the dehydration feature is super quiet

I thought I was going to get super intimidated by air frying, but Ninja legit makes it so easy. Yes, this is a big stocky machine—but it’s not unattractive, as far as appliances go, and somehow sits very roomily under my kitchen cabinets. It cleans easily, has a straightforward design, and is conscious of how much space it takes up in your life; after all, if you’re going to spend money on an air fryer, why not go for one that has a gazillion features? I never expected to love dehydrating, but now I can’t stop thinking about the possibilities. (Fresh basil! Escargot jerky! Raisins from actual grapes???).

You know how light takes time to travel, and if we pick a certain spot in the universe, we could technically observe events happening in “real-time” thousands of years ago, RN, like gladiator fights and dancing Druids? Well, the Ninja feels like it was born from that sense of scientific wonder. It is the High Speed Rail of air fryers, and I am happy to be aboard.

The Ninja DZ201 Foodi 6-in-1 2-Basket Air Fryer is available for purchase at Amazon, Macy’s, and Walmart.

Your faithful VICE editors independently selected all of the stuff featured in this story. VICE may receive a small commission if you buy through the links on our site.