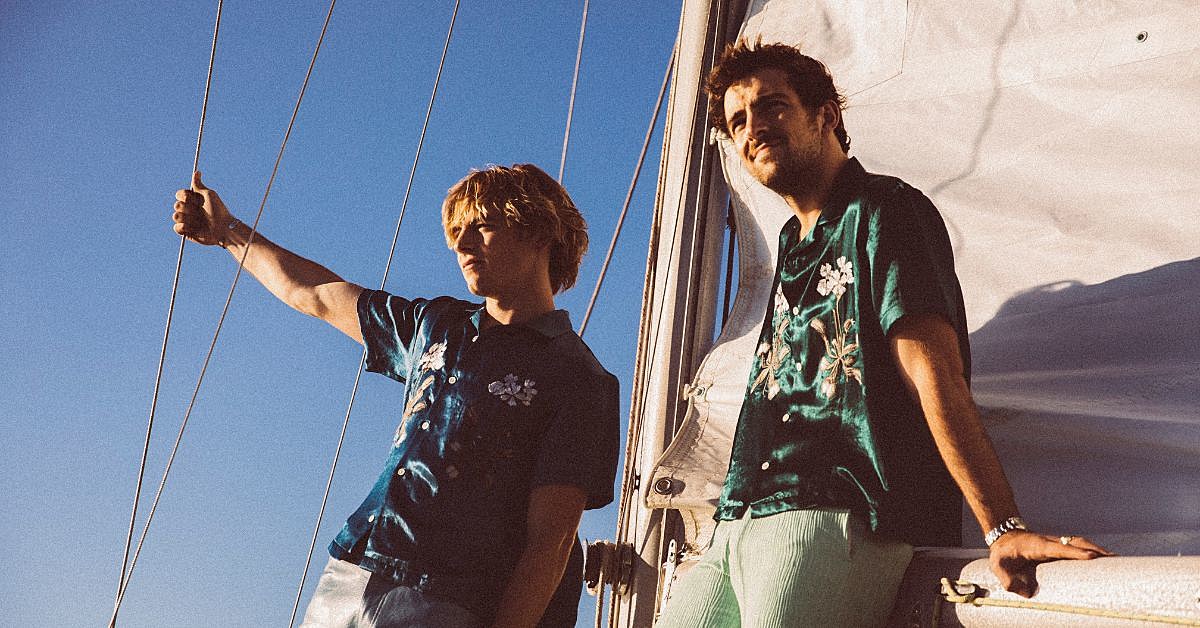 The internet has set its focus on the Driver Era frontman Ross Lynch, who went viral for some sensual performances during the band’s latest North American tour. But with the release of the Driver Era’s third album, Summer Mixtape, the focus should be on the creative feat of brothers Ross and Rocky Lynch not only writing and producing the album but also mixing it.

Alternative Press spoke with the pair about their creative process in making a sound that’s all their own with Summer Mixtape and where they get their inspiration. The duo also opened up about what it’s like for them to be at different levels of fame, with Ross being known for his acting roles (Netflix’s Chilling Adventures of Sabrina, Disney Channel’s Austin & Ally), while Rocky’s fame comes from being in R5 alongside Ross and the rest of their siblings as teens.

One thing I’m interested in is that you both not only produced and wrote the music, but you also did your own mixes. Your music sounds like rock meets ’70s disco, but this album feels like you’ve created your own genre. Do you feel being able to do everything has given you more creative freedom to make something that sounds completely new?

ROCKY LYNCH: Yeah. Actually, we somehow have been blessed with the opportunity to be able to go any direction and write anything and produce any way we want.

ROSS LYNCH: And be able to have fans. It actually is a blessing. It really is.

ROCKY: I always think about those times when I was younger. How much was I actually affecting just coming up as R5? And then getting here, you’re like, “What the fuck?” I wake up in LA sometimes, and I’m like, “I can pay rent, and I have a studio in my house, and I can make anything!”

ROSS: We know plenty of musician friends that have other jobs, too. They’re servers, or they work for Postmates. And it is a blessing. You’re right: That is what makes us able to experiment and have raw expression is because we’re in a lucky situation where we have the best fans in the world. I don’t say that lightly — I truly believe and think that. So I do agree that that is what allows us to be so courageous with creation.

We’re in a different place in the music industry right now where TikTok’s taking over everything, and virality seems to be the main focus when a lot of music fans just want authenticity. It sounds nice that you have that relationship with your fans who are after that emotional music, rather than something viral.

ROSS: We have to try hard to stay true to ourselves and our expression, too, because there’s always the business side of people that have noticed the viral bits that have been happening, and they want to jump on that. So at the same time, it is a decision for us to be like, “No, actually we’re going to do this raw mixtape that feels authentic to us,” even though a lot of our team and immediate peers didn’t really understand the mixtape.

With this album being a progression of what you’ve been creating, what aspects of life did you pull from as your inspiration to go further into this direction of creating something that’s so uniquely the Driver Era?

ROCKY: When we’re in the studio, it’s almost [like], “How can we go as far away from everything that we’ve heard before?” Because we listen to a lot of music, and obviously we’re influenced by a lot of artists and producers and songwriters. But when we’re working on something, it is like, “Where have we not been?” We’re putting our experiences and our feelings and our ups and downs and our highest moments into music.

ROSS: That’s when expression is at its best, when it’s a kind of therapy. When you use it as a vessel to transmute your experience or almost a journal, almost archiving your experience. There are plenty of songs on this record [where] the words are literally exactly what I was thinking. Like “Back To You,” for instance. I think the night before, we were out and about, and I was drinking, and it was one of those days where I was fed up with being known by strangers because sometimes it takes away the opportunity to introduce yourself. So there’s a line in it where I’m like, “I wish I was nobody” because I keep looking for love in all the wrong places.

That’s an incredible way to write. The lyrics in “Back To You“ really hit me in regard to parasocial relationships with celebrities. How do you even juggle being a real person with friends and family, but then also being this idea of a person when people don’t really know you?

ROSS: I’m not a person that has a hundred friends. I like to say that I have three super-close friends, and I tend to just think that’s all you really need, but I do like to meet strangers, too. It’s been such a big part of our lives now for so long that I’m just used to it at this point.

ROCKY: I have almost the celebrity lifestyle. I think it helps. It’s like I’m a fraud because I’m not famous, but…

So, an underlying theme of this album, at least that I got, seems like a lot of lust and longing was going into these lyrics.

ROSS: That just seems to be where a lot of drive comes to creating music, that longing feeling.

ROCKY: I feel like the movies, the best part, if you’re watching a romance movie, there are these two people that end up falling in love. The most magic and the most spice, I feel, are at their earliest introduction, and they don’t have each other yet, and therefore there’s this extreme desire. I was thinking of Titanic. But in those moments, a lot of songs are like your vibrations tie in those moments, and therefore they spur in songs.

I feel like in a lot of music, you don’t really hear that kind of thing anymore, of longing that feels real.

ROSS: Well, a big part of my year has been a long-distance relationship. So I think that’s a lot of where that longing also comes from.

That makes sense. You were saying before that music can be a form of therapy in and of itself. So to be able to get that out in song and then have people respond or relate to it must be cathartic.

ROSS: 100%, it’s really amazing when we get people that come through the meet and greet, and they’re like, “I was going through a really tough time, and I just want to let you guys know that your music got me through it.” It means a lot because I have those bands and those artists that do that same thing for me, and I know how valuable that is. It’s really cool that we can help people feel heard or seen or at least help them on their journey.

To completely change the mood of this discussion, I do have one more thing I want to discuss. My entire TikTok feed has been you dancing either shirtless or with a tight white tank top on…

ROCKY: [Laughs.] I was wondering when this was going to come up.

How does it feel that the whole entire internet is like, “This man perfectly encapsulates the female gaze”?

ROSS: It’s nice, honestly. I just want to be careful about how I navigate the upcoming shows and images and stuff that comes out because, as an artist, I think it’s important that you are at least intentional with what you want to say. And I mean that in not only what you say but what you’re representing. So I don’t really know what that means, yet. The first video that went viral, I was just feeling it. It was authentic. I was just having a good show, it was a hot show and I just felt it, but I definitely don’t want to do anything that’s not from that place. I think why it went viral was because it was of the moment. So sometimes now, we’re in shows, and people are like, “Take it off!” I don’t think I want to necessarily oblige because I want to be inspired. I don’t want to do things out of obligation.

That makes sense. The conversation about sexualization and objectification in media always is about women, and men who get objectified and sexualized, when they’re in a moment doing something, feeling something, the response from the public is like, “Oh, just deal with it.”

ROSS: For me, I just see it as I have no problem with my shirt off. I just feel like I’m at the pool or at the beach or something, but it does definitely make me think more about it. It’s been two weeks now since that happened, and I hear about it every day. So I don’t really know what that means yet.

Well, it’s good that you’re thinking about it. I feel that, if anything, that shows how much you respect your fans and your want to continue to have that mutual respect between you all.

ROSS: Ultimately, I don’t want it to be about me shirtless. I’d much rather it be about great art.

ROCKY: Sometimes that’s how you get to the great art. You got to go through the abs. That’s the portal — the portal is sex.