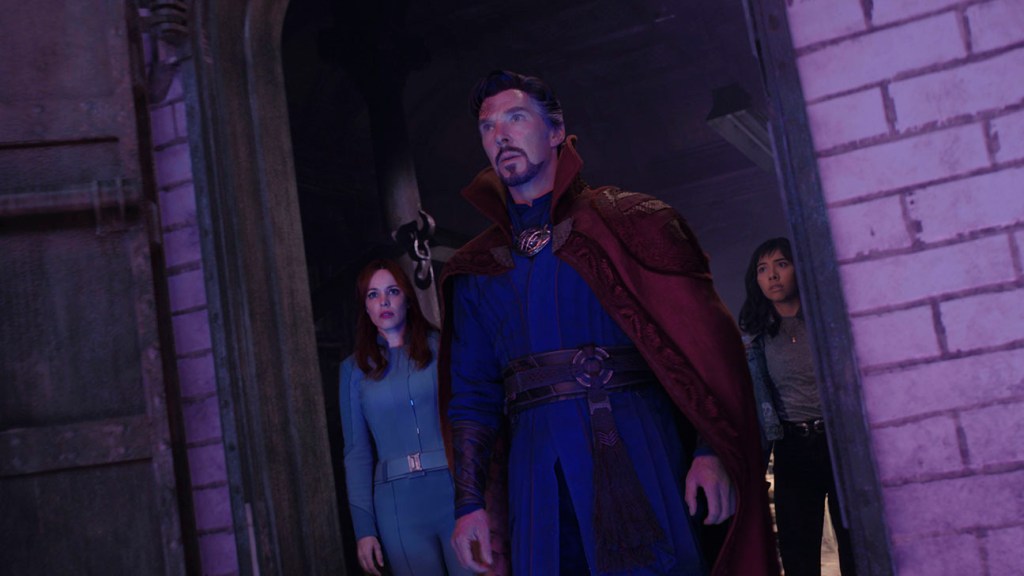 [Warning: This story contains spoilers for Doctor Strange in the Multiverse of Madness.]

What is it that disturbs you, Stephen?

No, that’s not a line from Doctor Strange in the Multiverse of Madness, though it very well could be. It’s the title of the 1997 Eisner-winning Marvel one-shot by Marc Andreyko and P. Craig Russell that sees Doctor Strange traveling through dimensions to save Wong. In addition, Strange faces off against a power-hungry, heartbroken witch who seeks his powers, before she ultimately pulls her citadel down onto herself.

The Sam Raimi sequel is by no means an adaptation of this story, though similarities between the two works are notable. What’s most intriguing is that Multiverse of Madness also begins Stephen’s (Benedict Cumberbatch) journey with a question, one that also prods at the dilemma of what disturbs him. “Are you happy?” Dr. Christine Palmer (Rachel McAdams) asks him at her wedding to another man. Strange smiles and lies, “I am.” For all the mind-bending trips through alternate dimensions and cameos that point to grander ambitions in the Marvel Cinematic Universe, Multiverse of Madness is a surprisingly simple and focused story that forces its characters to examine the cost of their happiness, and when and where such a crucial emotion can be tapped.

As much of a thrill as it was to see Raimi imbue Multiverse of Madness with horror (all the while witnessing the MCU set up future appearances of the Fantastic Four), and for the story to introduce “incursions,” the biggest strength of the Doctor Strange sequel is that it makes looking forward to the Multiverse future a key part of the thematic narrative. With the MCU’s Phase 4, so far, built around characters finding their roles and purpose in a world irrevocably changed by Thanos, it feels appropriate that Doctor Strange in the Multiverse of Madness finds its central protagonist and antagonist caught at a crossroads in terms of what they’ll become and what roles are out there for them.

While there was some audience expectation for the sequel to weave itself through a larger playground, incorporating Loki (2021), Spider-Man: No Way Home (2021), Fox’s X-Men, Deadpool, and a bunch of pre-MCU character adaptations, Multiverse of Madness instead relies on threads set up in Doctor Strange (2016), WandaVision (2021) and What If…? (2021), resulting in a character-driven film concerned with the price of desire, to be defined by a singular element, a component, though absent from Raimi’s most well-know Evil Dead series, is present in so many of Raimi’s films, from Crimewave (1985) to A Simple Plan (1998) to Drag Me to Hell (2009). While Raimi’s aesthetic style is an obvious highlight of Multiverse of Madness, the themes that he’s invested so much of his filmography in are also very present and fit in rather neatly with ideas the MCU had previously set up.

In Marvel Studios’ animated series, What If…? there is an episode titled, “What If…Doctor Strange Lost His Heart Instead of His Hands?” It’s not only the best episode of the series, but the perfect lead-in in terms of how Multiverse of Madness looks at Stephen Strange and Wanda Maximoff (Elizabeth Olsen) in their respective quests for happiness. Within that episode, Christine Palmer dies, and despite using the time stone to try to save her, and failing again and again, her death is an absolute point.

Strange then travels back in time, seeking the lost books of the sorcerer Cagliostro and begins using dark magic to consume alternate dimensional demons, taking their powers for himself in order to break the rules of reality. The process both turns him into a monster and causes the collapse of his universe. In Multiverse of Madness, we see other variants of Stephen Strange, who, even if they aren’t consumed with grief are unable to let go, to do as Christine tells Strange at her wedding, and let someone else hold the knife.

Strange later admits his refusal to allow someone else to take the lead, to make the hard choices, is because of his fear, his fear of loss, of failure, of not being able to save a life and prevent tragedy. This fear, which stems from the death of his sister, manifested in Doctor Strange, directed by Scott Derrickson. In that film, Strange refused to take patient cases he knows he couldn’t succeed in. He mentions not wanting to break his streak, and his off-putting ego makes him seem like a glory hound, but it’s fear that drives him.

And it’s that same fear that explains his chilly relationship with Wong (Benedict Wong) and the start of Multiverse of Madness, and the callous treatment of the body of his own deceased, pony-tailed Variant. He fears loss. He fears being left without a solution. And he fears being helpless. These fears were only exacerbated by the nerve damage to his hands, even if he did emerge from Kamar-Taj a less outwardly selfish individual.

Wanda is driven by a similar fear of helplessness, one that also stems from childhood and her inability to save her parents from a bomb in Sokovia. So, she gave herself over to an order that would give her power. HYDRA certainly wasn’t the Kamar-Taj, but it did provide her with tools to fight back against her fears and create fear in others. Yet even with that power, she couldn’t save her brother Pietro (Aaron Taylor-Johnson), and she couldn’t save her husband, Vision (Paul Bettany).

And even after she tapped into the means to resurrect them, along with the creation of two children, Billy (Julian Hilliard) and Tommy (Jett Klyne), she still couldn’t hold onto them. She still couldn’t find happiness. Wanda’s mind is shattered, evidenced by her reflection in the film, in much the same way Strange’s hands were shattered, and both were put on the path to find answers through magic and the multiverse.

Doctor Strange and Wanda in this film both provide rather sobering looks at individuals who saved the world, but still aren’t granted more time with the people they need most in their lives. Raimi explored this on a smaller scale in his Spider-Man films, in which Peter Parker (Tobey Maguire), despite saving New York City countless times, was still asked to “give up the things we want the most, even our dreams.” Yet Parker wasn’t magic, and he didn’t realize that those dreams could be his for the picking by Dreamwalking through the infinite possibilities of the Multiverse.

There will surely be plenty of discussions in the years to come about Wanda’s turn as the Scarlet Witch in Multiverse of Madness, and how the film utilizes her as an antagonist after claiming she set things right in the aftermath of WandaVision. But I think it’s fair to challenge just how right she set them. Yes, Wanda let the dozens of Westview, whose minds she enslaved, free. But she also removes Agatha Harkness’ (Kathryn Hahn) ability to use magic and then enslaves her mind within the nosy neighbor persona of “Agnes,” which somehow feels crueler than killing her.

And rather than surrender herself for the crimes she committed, she flies off. Not only does she imprison a woman and evade justice, but she also takes the book of black magic, The Darkhold, with her, with designs on finding her children again.

While Wanda’s reveal as the big bad in Multiverse of Madness may come sooner than expected, WandaVision clearly established that was where she was headed, her moral flaws only exacerbated by her use of dark magic. While there is a certain therapeutic message in Vision’s line, “what is grief but love persevering?” there is also a horror to it, which begs the question of how long it must preserve before it becomes an inability to let go of the past and that love becomes corrupted?

In every universe, Stephen hears of or meets versions of himself who have become corrupted by love, by wanting to set things right. Wanda, on the other hand, only sees versions of herself who have retained what she has lost, her children, and the pure expression of love they share. “I’m not a monster, I’m a mother,” Wanda says at one point in the film, eliciting empathy despite the fact that she isn’t a mother anymore, and even when she was, it was only for children she created through magic.

The one-time Avenger is without a role, something Strange is also confronting. He’s not a surgeon, he’s not the Sorcerer Supreme, he’s not the love of Christine’s life, and he’s not even an Avenger since a new team was never formed. He’s the Master of New York’s Sanctum Santorum, but as his Darkhold-addled variant tells him, that’s simply a state of being trapped in a haunted house. Strange is surrounded by objects of the past, like Wanda and her memories. This is the thing that disturbs them both.

Strange is able to break out of the past by letting someone else hold the knife, trusting his body to a Variant version of Christine Palmer, while Dreamwalking in his deceased Variant, and allowing America Chavez (Xochtil Gomez) to be the one to break Wanda from her delusion that her children would understand what she’s become. In America, Strange sees hope for the future, in new heroes, and in his role as a mentor. Love can manifest in different ways.

Yet, Wanda, who has experienced so many tragedies, cannot see a future without her children, and now, feared by her former allies, sees no outlet for love. She brings Wundagore Mountain down onto herself, destroying every version of the Darkhold in the process, and seemingly meeting her demise. Of course, Wanda isn’t gone for good, and just as the comics have achieved, there might be a chance for redemption in her future. But in the immediate present, her happiness is unattainable, and that’s a rather bold and risky note to leave a superhero on. It speaks to an emotionality that, even when heightened, comes from looking at these larger-than-life characters as real people, a quality that exemplifies the storytelling objectives of both Raimi and Marvel.