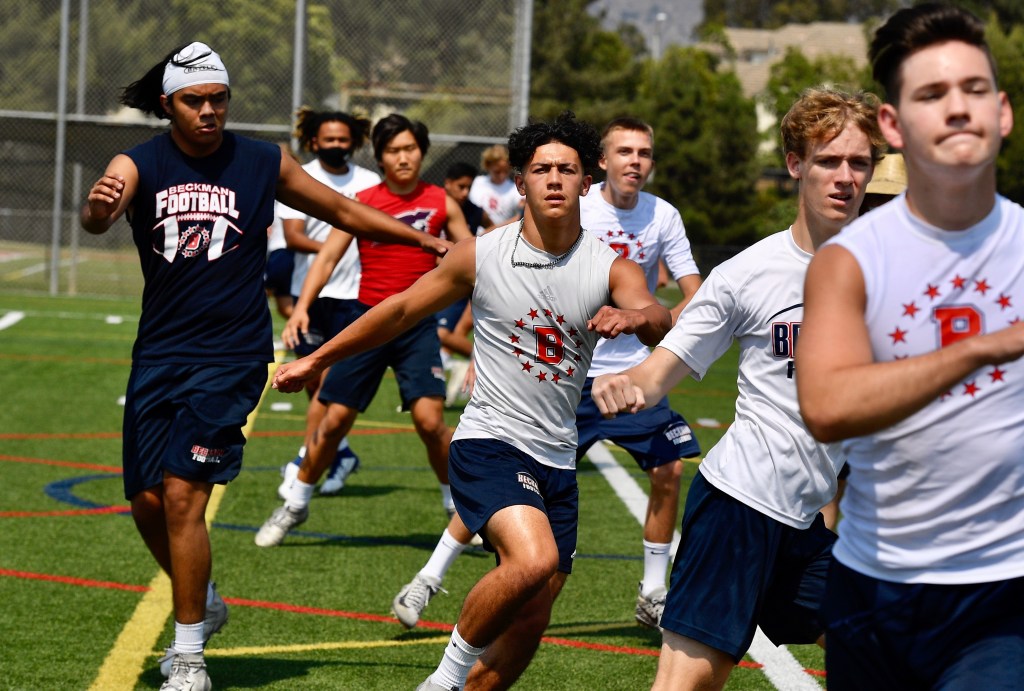 Citing the spread of coronavirus cases as the culprit, Gov. Gavin Newsom said Monday, Nov. 16, that California is considering delaying the release of new guidelines for high school and youth sports competition, a development that casts doubt on whether the already-delayed high school season will start on time next month.

Speaking during a news conference about the state’s response to the pandemic, Newsom said he reviewed guidelines for high school and youth sports to return to competition and “signed off” on them but added that he is considering delaying their release.

Since Aug. 3, high school and youth sports in the state have been limited to physical conditioning and skill training and prohibited from competition because of the coronavirus pandemic. The high school and youth sports communities have been waiting for weeks for an update, especially after Dr. Mark Ghaly, secretary of the California Health and Human Services Agency, said last week that an update would be ready soon.

“It’s incredibly important that we do our physical activity safely,” Newsom said. “Dr. Ghaly was talking about updates. I’ve reviewed the update. I signed off on it and then we have now looked to potentially pause it.”

Newsom said the reason for waiting to release the updated guidelines was the recent rise in the coronavirus numbers, which led to Monday’s announcement that counties with spiking metrics will now be moved back in the state’s tier system after just one week, not the previous two-week requirement.

Orange County, for example, was moved back to the purple tier (widespread risk) on Monday, joining Riverside, San Bernardino and Los Angeles counties.

Boys volleyball season in the CIF Southern Section is scheduled to begin Dec. 12. Football and other sports practices are scheduled to start on Dec. 14 in the Southern and L.A. City sections.

The CIF State office acknowledged the governor’s statements Monday, saying in part in a release that the “current guidance remains in effect, and CIF competitions are not allowed until new guidance is provided.”

Ron Nocetti, director of the Sacramento-based CIF State office, said he didn’t take Monday’s developments as a signal that the season won’t start on time. He remains hopeful that guidance from the state will arrive soon.

“It’s a good sign that they’re including us in the conversation,” he said. “I’m going to hold out hope we can achieve something down the road.”

But administrators, parents and coaches expressed their frustrations Monday.

“At this point, games are not going to start Dec. 12 like they’re supposed to,” said Chris Fore, a member of the newly-formed West Coast Coaching Alliance and principal at Palmdale Aerospace Academy.

“I think the governor’s office does owe kids a timeline. They’ve been shut down since March, not being able to compete. The sooner they they can give a timeline about sports coming back, the better it will be for student-athletes, and adults can make the needed adjustments.”

Ghaly again said guidelines would arrive soon but cautioned that the timing to release them now isn’t good because case rates are “going up very quickly.”

“Timing is everything with this,” he said. “We want to make sure that as we move forward with something as important as youth sports, we do it with eyes in front of us and hoping that (we) set it up for success, so as it happens, we don’t have to pause or stop it down the road.”

CIF-SS commissioner Rob Wigod described the situation as a “waiting game.” He pointed out that perhaps only league games would be played if seasons are delayed. He also endorsed Ghaly’s recent comment that a county’s standing on a tier could relate to the type of sport activity allowed.

But many coaches and athletic directors are losing patience.

“We were hoping for guidance on sports a few weeks ago, and we’re still waiting,” said John Tibbels, the athletic director at Ramona High in Riverside. “And every time we look at the numbers in our county, they are going in the wrong direction for things to move forward. We haven’t given up hope, but time is starting to run out on that first season starting as planned.”

Bishop Amat football coach Steve Hagerty said he always expected this was “going to be a day-by-day or week-by-week thing,” so Monday’s announcement of another delay was not a surprise.

“With all the cases rising, they’re not going to open youth sports, and my thought process all along is if you’re not in school, you’re probably not playing,” Hagerty said. “But we’re all hopeful. If we end up playing five games, three games, or one game, it’s better than no games. We just want to see these guys have an opportunity to play on Friday nights.”

“Things are so convoluted and up in the air,” Shevlin said. “Not every school has the ability to test, and with the numbers going up, I don’t see how we can get into the zone that will allow us to be competitive.”

The state restrictions, written by the California Department of Public Health, have led many club teams to travel out of state to play games. Newsom mentioned Monday that a Southern California youth team recently went to Phoenix, Arizona, for a tournament and came back with “a lot of positive cases, even young, healthy individuals tested positive, as well as their coach and some family members.”

Nocetti said he hoped Newsom’s cautionary tale about club teams competing out of state and the postponement of guidelines would inspire everyone concerned with high school athletics to follow safety protocols.

“That doesn’t help,” Nocetti said of the travel baseball story.