Evanescence know every lesson learned since ‘Fallen’ has been worth it 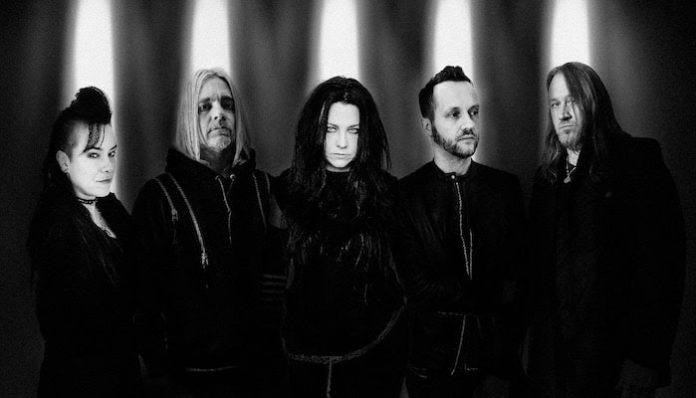 From the time that Evanescence formed in 1995 to the present, the group have never had to sacrifice their focus or collective talents on “finding their voice” unlike so many other rock ’n’ roll acts of their magnitude. Instead, Evanescence erupted with frontwoman and founder Amy Lee at the helm. Boasting a mezzo-soprano vocal range uncommon in the rock realm, Lee’s piercing skills amplified the band’s sound to otherworldly heights. But before they were dominating every rock radio station in the world with their debut single “Bring Me To Life” and became Grammy-winning artists, Evanescence had to fight the misogyny of the music industry to break the mold of sounding “familiar” to gain a fanbase and get to the pinnacle point that they’re at today. But nearly two decades later, Lee is still choosing to use her voice to fight against the misogynistic double standards of rock ’n’ roll.

Over the course of four full-lengths since their debut, Fallen, in 2003, Evanescence have remained unflinchingly uncompromising—and for good reason. With their fifth studio album, The Bitter Truth, Evanescence have never allowed their writing or production to grow idle. Lee’s veins run lucidly with intense creativity, expressed across the group’s two-decade career, theatrical onstage performances that have grown larger than they ever imagined and Lee’s dedication to pushing herself beyond her own comfort zone. So many artists struggle to stretch themselves beyond their self-set limitations, but not Evanescence. Because every decision they’ve collectively made with their fans in mind. At the time of their formation, Lee was searching for her own refuge and escape from the burdening pain she felt, but 17 years later, she’s grateful that she’s able to give fans a place to escape with Evanescence’s music. To Lee, there’s nothing more satisfying.

When you were first starting Evanescence, who did you note as early influences?

There were a lot. There was so much in the ’90s going on that had to do with uniqueness. I feel like there weren’t really genres in my mind. It was just music that cut through and spoke to me, and I was like, “Whoa, I didn’t know you could do that.” At the same time, you had Nirvana and In Utero coming out, “Heart-Shaped Box” at the same time. Björk, her debut album, with “Human Behaviour” and all these interesting sounds coming from another planet. And at the same time, there was just so much beautiful angst coming from the rock and alternative world, and a lot of it was female. I remember being really into a lot of bands. Even the Smashing Pumpkins had some female vocals from D’arcy [Wretzky] being on bass. That was really cool. But like, Tori Amos and Soundgarden. One of my favorite vocalists of all time was Chris Cornell because I thought it was really amazing and unique how he really created his own genre in the way that he sang. The way that he made his melodies [sound] was so soulful. It didn’t sound like any rock I’d ever heard before. And I remember being really into Soundgarden and a lot of those bands.

Read more: Rina Sawayama’s debut was always going to be as weird as she wanted

In 2020, there [was] this huge movement for women to have their power and own themselves and their crafts. Does it make it all so much more worth it? You held your ground, and it’s been 17 years since Fallen was released. You’re still one of the leading women in alternative rock, paving the way for other young women and encouraging them. Does it all seem worth it now?

It totally all seems worth it. There have been challenges all along the way. I think that’s got to be true for most bands, if not all bands, that they carry on after so many years because people are people and the music industry is interesting and a fickle thing. And so is writing and creating music for me, anyway. It has to come from a very honest place. I have to really be in love with the music that I’m making to want to put it out. That’s not easy. That’s not something I can control all the way. I can’t just go, “You know what? I’m gonna make an album. It’s time. Everyone wants it. We just got off tour. Let’s do this” and force it out. It has to come from a place that’s real. Inspiration comes all the time. That is definitely something I’m learning to embrace and love and lean into more and more. The older I get, there’s just something extra. Something that isn’t about me. Something that’s even more than just the collaboration of me between my band and the producer and everybody else. There’s something magic. There is magic. I believe in the magic. Whatever it is. If we can tune into the frequency in our heads to think of something that’s special, I believe in that. I think there’s something more to it than just a math problem.

For me, it has all been worth it for so many reasons. To be where we are now, after all the challenges that I personally have been through, all from the very beginning of this thing. I couldn’t be happier to be here now with these people that I’m working with now. I’m so grateful. It was worth it.

Read more: Jeris Johnson drops an amped-up remix of a Bring Me The Horizon classic

Now, Evanescence [have released] The Bitter Truth. After releasing Synthesis and having those incredible stage performances and being able to recapture those songs in a completely new way, how were you inspired going into the creative and writing process of The Bitter Truth?

The Bitter Truth is so different in its formation. We’re just beyond all the rules now. All the freedom that all those experiences I just talked about afforded us the confidence of feeling like we can reinvent our process if we want to. In fact, let’s do it continuously. I know the rules. We know the safety. Let’s just break them all we can. Not in, “Let’s make ourselves sound like a completely different thing.” It’s not that. But for me, just being open-minded to even the way that we release our music and being brave enough to start releasing music when we haven’t finished the album. I would be lying if I said that didn’t put a little bit of pressure on me at this moment because now we’ve released the third song, and we’ve only got one more totally finished [song] in the chamber. Before we’re going to run out of stuff, we have the other ones going. It’s all happening. But I’m still writing lyrics to the last two songs.

The only pressure is really coming from myself. At the same time, there’s some time when we’ve started a train, going like, “We need to go.” Some level of pressure is good, but too much is bad. I feel OK actually. I feel very inspired. It’s been such a crazy year, such a hard year for everybody in different levels and in different ways. But this music is saving my life. It has been the thing that I can own, the one thing that I can come out here and do and make something beautiful. It’s a deeper understanding of my place [and] my belief of my place in the world and in our music and why I do what I do. It comes from these hard moments. That’s where I think some of my best really comes from, from the reality and vulnerability of being willing to admit that things are hard, and I need to face them, and I need to purge them from my system through music.

It’s so healing for me, even just expressing it without a resolution of, “But it’s all going to be fine.” But here’s why you should hope. Sometimes that exists in the songs, and sometimes it doesn’t. I think that the moments when it doesn’t are just as important because it doesn’t always feel like there’s necessarily a light at the end of the tunnel. Sometimes we just need to live in that place together and know as humans that we’re not alone in it and just dive into it for a minute. Just go ahead and indulge your feelings in the music and pour out in that way. It’s like having a good cry. So then you can be like, “Oh, here we go. I feel good now. I can be funny again.” And releasing it in a way that, one by one like we have been, it gives each song a moment. Only a couple of singles get that moment typically. Then you just release the whole thing, and everybody hears it all in their own time and in their own way, and it’s cool, but it’s not as cool, especially now when we don’t get to connect with our fans in person or as much really as we normally would with shows and what we do live. That gives those songs more life.

The only thing that we have is these recordings in this release and all the little things. So to let each song have a little celebration, we won’t do it with every single song on the album, just the first half and then drop the rest. It’s just been feeling really good. I just feel like I’m living in the moment, which is exactly what I said when we started: Let’s just go and record it with what we have. I wanted to live in a moment with this. Let’s just start. Let’s just go now, and when we have a new idea, we’ll go then. Let’s just go. Life’s too short to wait.