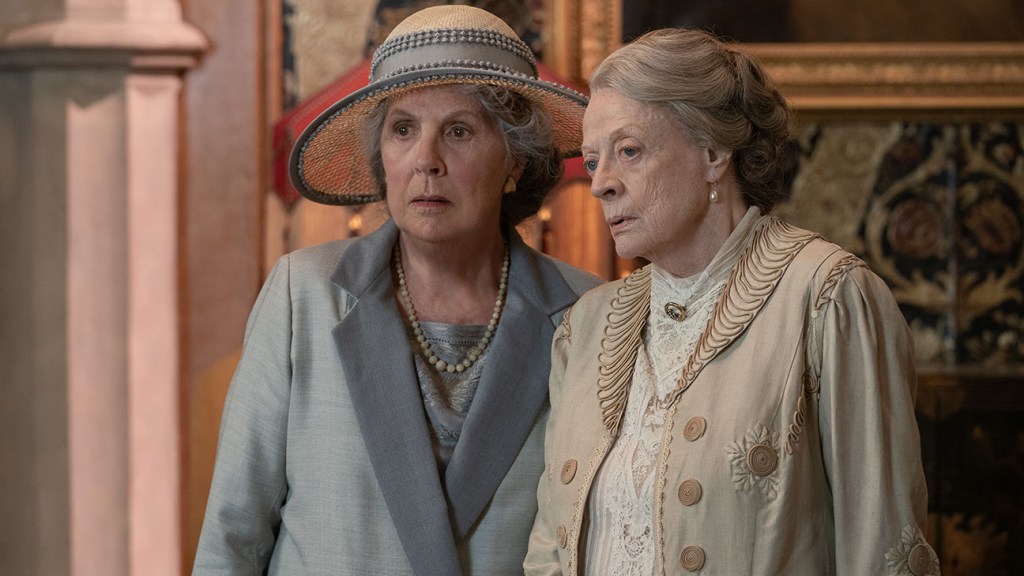 When we last checked in on the aristocratic Crawley clan and their bustling household below stairs in the 2019 Downton Abbey spinoff movie, a royal visit caused more of a stir than a briskly foiled assassination attempt, the gay butler’s secret was narrowly spared the harsh glare of exposure and a headstrong cousin ruffled feathers by willing her estate to a maid revealed to be her illegitimate daughter, just in time for a whisper of romance with another upgraded servant who also shocked the toffs way back when. Heavens!

All that notwithstanding, the film managed to be resolutely low-stakes comfort food, a sugary dessert whipped up by series creator Julian Fellowes to appease fans still wanting more after six seasons. Despite the promise of sweeping change in its title, Downton Abbey: A New Era is very much more of the same, which will be just fine with devotees of the long-running PBS hit.

The Bottom Line At this point, strictly for the faithful.

The pleasures remain intact — the gowns, the hats, the posh dinners, the enviable real estate, the sparkling repartee. Well, maybe the latter not quite so much, since the screenplay seems like something Fellowes knocked off during tea breaks on the set of his new frock opera, The Gilded Age. Even the acerbic bons mots delivered with crisp aplomb by Maggie Smith’s Dowager Countess, Violet Grantham, don’t match the tart-tongued precision of her best retorts. And the direction of Simon Curtis — the man who made even Helen Mirren dull in Woman in Gold — seldom rises above serviceable.

Still, the chance to renew acquaintances with the sprawling ensemble of beloved characters will be reward enough for many, if the worldwide box office of $194 million for the previous film is any indication. Those characters are deftly reintroduced in their various groupings in wedding photographs at the festive village nuptials of Tom Branson (Allen Leech) and Lucy Smith (Tuppence Middleton), the class-jumping former help mentioned earlier.

But the key plot development here is Violet’s inheritance of a French Riviera villa from an old flame, the recently deceased Marquis de Montmiral, with whom she spent an idyllic week there six decades ago, before either of them was married. The Montmiral family intends to dispute the claim, though when asked if she considered refusing the inheritance, Violet snaps, “Do I look as if I’d turn down a villa in the South of France?” Given the last film’s revelation that her health is fading fast, the Dowager Countess plans to leave the villa to her granddaughter Sybbie (Fifi Hart), the child of former chauffeur Tom and his late first wife, Lady Sybil.

With Violet unable to travel, her son Robert (Hugh Bonneville) and a posse of family and servants, including retired butler Mr. Carson (Jim Carter), head to France. That trip sparks all kind of questions about Violet’s past, Robert’s parentage, and the legitimacy of his title, Lord Grantham. Many fretful glances ensue, but not from Robert’s wife Cora (Elizabeth McGovern), who maintains a beatific smile even while worrying over her own health scare. Gracious!

Back at Downton, the place is abuzz when a film crew from The British Lion Company arrives to shoot a feature called The Gambler. Everyone’s suitably appalled about a bunch of bohemian actors soiling the sacred digs. Frightful! But the practical and progressive Lady Mary (Michelle Dockery) reasons that the location fee will pay for urgent roof repairs.

Since it’s 1929, silent films are on the way out, a shift that neither the director, Jack Barber (Hugh Dancy, with unfortunate ballet-dancer hair), nor the studio appears to have considered before getting underway. That requires quick-thinking improvisation from Lady Mary, with unexpected help from former footman-turned-schoolmaster Mr. Molesley (Kevin Doyle), a mad-keen moviegoer. Hurrah!

Fellowes to some degree borrows from himself in Gosford Park by mixing film folk with upper-crust locals to observe the class divide and then erase it as masters and servants pitch in together to surmount all obstacles. The writer also steals from Singin’ in the Rain by having a glamorous blonde leading lady, Myrna Dalgleish (Laura Haddock), whose harsh working-class accent makes her tremble at the arrival of talking pictures. Suave leading man Guy Dexter (Dominic West) is more adaptable, which may prove beneficial when he takes a shine to lonely gay butler Barrow (Robert James-Collier).

Curtis and editor Adam Recht cross-cut between Yorkshire and France with a galumphing lack of grace, often accompanied by a jaunty burst of John Lunn’s lush orchestral score and someone mid-peal of laughter. Or by somber notes and a character deep in furrowed-brow concern. It’s all a bit mechanical, and soapier than ever, particularly since few problems arise that can’t be swiftly resolved in a script that diligently ties up everything in neat bows.

Only in the moving final scenes does real pathos intrude, but even that’s slathered in corny summation dialogue that borders on sweet self-parody. “I suppose individual Crawleys come and go, but the family lives on,” sighs Lady Mary. Whether that means a Downton Abbey threequel will depend on how much the over-qualified cast is content to keep returning to roles that have now become animated props. It seems irresponsible to give actors of the caliber of Imelda Staunton and Penelope Wilton so little to do. But in the age of endlessly recycled IP, is any cash cow ever really put out to pasture? Unthinkable!