Daniel Kaluuya (Sort Of, Not Really) Teases ‘Nope’: “It Has to Be Experienced, Not Described” 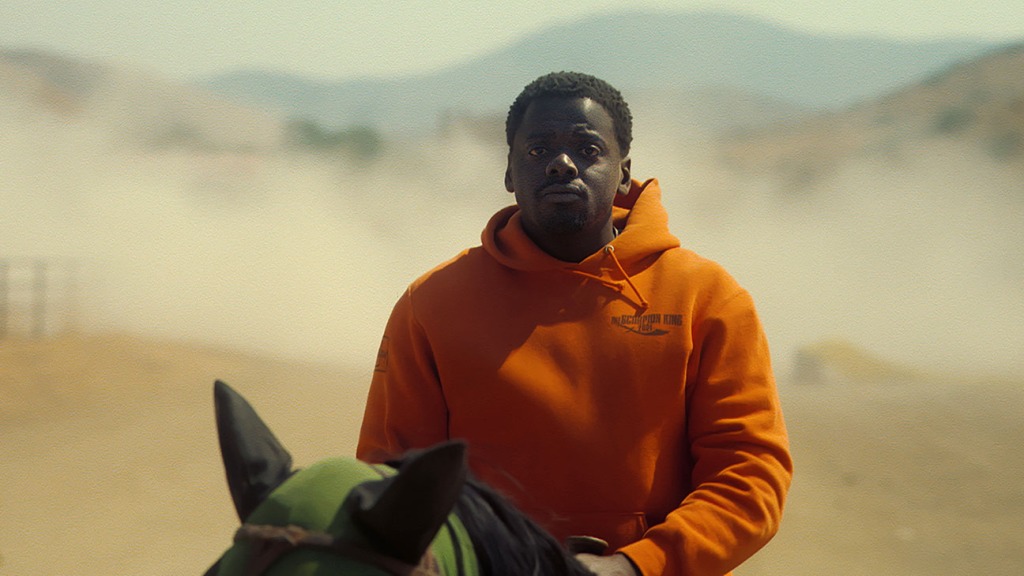 “It’s to be experienced, not to be described.”

That was Daniel Kaluuya’s honest response to Lil Rel Howery’s request to tease something about his upcoming film Nope, the latest mysterious joint from the mind of Jordan Peele. The two Get Out costars reunited Thursday night at the Universal Cinema AMC at CityWalk Hollywood for an exclusive conversation for CultureCon, a conference dedicated to creatives of color.

The Oscar winner generally doesn’t have much trouble when curious friends and acquaintances probe him for details on a Peele movie, because the filmmaker’s mysterious movies genuinely defy simple synopsis. “It’s not hard, because it’s hard to describe,” he said, offering up his breakout project as an example. “‘Uh, I met a girl, I go to her house, and I’ve got to get out of her house.’”

What Kaluuya could say was that Nope, which was shot with proprietary IMAX 15/65mm cameras and will open in theaters July 22, is at its heart a story about a brother (Kaluuya’s O.J.) and sister (Keke Palmer’s Em) rediscovering their bond as they maintain their late father’s horse training ranch up in the Santa Clarita Valley (the production shot in the town of Agua Dulce). “They’re estranged. He’s disappointed in her; she’s sick of him,” he said of their relationship at the beginning. “But there’s this bond that you have each other’s back no matter what bullshit happens.”

The exact nature of said bullshit won’t be revealed until the film premieres, but Kaluuya was happy to enthuse about his costar, whom Howery compared to Sammy Davis Jr. in her ability to wear so many hats – acting, music, hosting – so well. “Keke’s so diverse as a performer, it’s almost old-school,” the comedian praised.

“Keke’s a star,” Kaluuya agreed, adding that Nope will “showcase the whole range of Keke-ness.”

“It’s awesome to work with someone so high-energy,” he said. “On nights you don’t feel like doing it, I’m like chugging espresso beans and she’s high on life.”

The energy contrast worked out for the characterization, though, because O.J. is the most “inward” character Kaluuya has ever played. “He’s still, genuinely still,” he said. “A lot of my other characters have been still because they’re covering the chaos in them, but he’s actually calm.”

To prepare for the role, Kaluuya spent three and a half weeks visiting and training at ranches – Howery joked that Nope would join Django Unchained, Blazing Saddles and Mario Van Peebles’ Posse in the tiny canon of movies featuring Black people riding horses – but it was easy to say yes to reuniting with Peele for another film.

“It’s genuinely collaborative,” he said, noting that both have backgrounds in improvisation. “You’re doing lines on set and if it doesn’t work, we just throw it away, it’s nothing personal. We know what the intention is and can find something more interesting. To work in that way again was exciting. I missed it.”

Kaluuya and Howery also reminisced about reuniting at the 2021 Academy Awards, the ceremony that took place after nearly a year of pandemic-induced lockdown, where the former won best supporting actor for Judas and the Black Messiah and the latter hosted a memorable segment featuring Kaluuya that culminated in getting Glenn Close to do “Da Butt.” The segment, which involved Questlove playing iconic movie songs from Black artists, had Howery cracking that it was the “Blackest Oscars ever.”

“To be in that moment with you, we were there as ourselves – that’s the win as well,” Kaluuya said.

The two also spoke specifically about what it means to have Black filmmakers at the helm. Howery asked Kaluuya whether he has intentionally worked only with Black directors – Peele, Black Panther‘s Ryan Coogler, Widows‘ Steve McQueen, Queen & Slim‘s Melina Matsoukas and Judas‘ Shaka King – and the latter answered that it was more incidental than either intentional or coincidental.

“I just wanted to play three-dimensional people. No matter how big or small, I wanted to tell an arc, to shepherd or steward an evolution in a character. When I demand that, you’re asking to be at the center of the gaze, and it just happened that way,” Kaluuya said, adding, “I don’t think people look at Timothee Chalamet or Nicole Kidman and go, ‘Do you only work with white people?’ I am Black, bro. I just go, What’s my truth? What do I want to say, what do I want to help someone say?”

Howery pushed back slightly: “Let me play devil’s advocate. Artists want to do their best art, but because of the way the system is set up, I think you have to be intentional sometimes. Not a lot of Black directors get the opportunity or the budgets. Get Out was a tiny budget [$4.5 million]. Most Black directors get the best out of stuff with the lowest budgets, and then we’ll see these bigger budgeted things [by white directors] be some of the most okay movies you’ve ever seen.”

Kaluuya didn’t disagree, and the conversation came full circle later with the two emphasizing how Black leadership behind the scenes tends to create more jobs for Black artists and also allows them more unfettered expression of their artistry, with Howery citing Peele and Issa Rae as just two examples.

For his part, Kaluuya is a producer (and Peele an executive producer) on the satire Honk for Jesus. Save Your Soul, which premiered at Sundance this year and opens in theatres Sept. 2, and he just wrapped production in London two weeks ago on his screenwriting debut, the Netflix dystopian drama The Kitchen, which he co-wrote with Joe Murtagh. Kaluuya had been developing the script for nearly a decade, participating in the Sundance screenwriting lab in 2016 and working on the screenplay on his days off during the Get Out shoot.

He produces “to bring people into the game,” he said. “We need more Black producers employing people and when there’s issues, you understand them and can translate and protect them creatively. They don’t have to code-switch. I’ve heard stories about talented people going, “I compromised this and compromised that’ and then they leave the game, and it breaks my heart.”