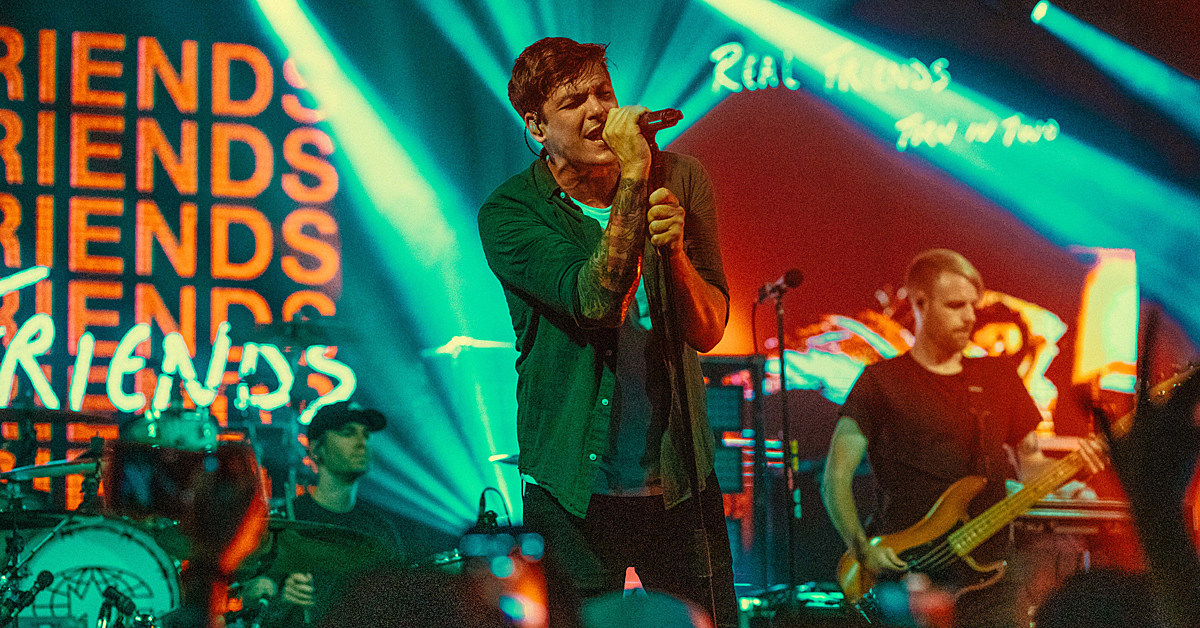 When Real Friends parted ways with longtime vocalist Dan Lambton in February 2020, the group’s future was uncertain. Prior to the announcement of Lambton’s departure, the band archived the majority of their Instagram posts and blacked out their social media presence, leading many to believe that Real Friends were in the process of breaking up. However, the band ominously assured fans of the future with just two sentences, writing, “This is not the end of Real Friends. We have simply turned the page to the next chapter.” Not long after the band’s statement went public, the world was thrust into a pandemic and ensuing lockdown. From there, it was radio silence, and many wondered if the next “chapter” would even get a chance to enfold.

Little did the world know, but Real Friends were secretly plotting their next chapter with a stockpile of songs and the addition of a brand-new frontman. Enter Cody Muraro, a Vancouver, Canada-based singer-songwriter who was playing in the rising pop-punk group Youth Fountain. Admittedly, changing singers is hard, and with a band that have such a strong and rabid fanbase, it was clear that Muraro had big shoes to fill.

While the group continued to write songs with Muraro and monitor the global situation at hand, Real Friends needed to usher in the next chapter of their career. “As far as expectations, we had a whole year during the COVID-19 pandemic to sit with the songs wondering what was going to happen much longer than we were hoping. It worked in our favor and allowed us the time to work on music and figure things out, but with that, it was also a double-edged sword of wondering if we were just wasting our time and if people were going to dislike it,” Muraro says candidly.

Now in 2022, Real Friends have kicked things into overdrive with the release of their latest singles, “Tell Me You’re Sorry” and “Always Lose.” While there’s been no announcement of a forthcoming LP, it’s abundantly clear that Real Friends will continue to release music on a consistent basis and continue to build this exciting new chapter while reaching even greater heights.

It has officially been a year since you took over as the lead singer of Real Friends. How do you feel like you’re settling in now?

Right away, everyone was really welcoming. It’s a really supportive fanbase. There was the fear going into joining the band that it could go one way or another and not know what was going to happen, but we were so ecstatic to put out new music, announce myself as the new singer and not have the internet hate on me. There was a fear for the first shows of who was going to throw the first tomato at me or heckle me, but thankfully it didn’t happen. [Laughs.] Over the last year, I’ve become more comfortable and feel like a part of the band and the community.

I feel like you did the impossible: You didn’t get the tomatoes thrown at you, and people fully backed you as the new singer, even with such large shoes to fill and such a rabid fanbase.

It was nice to see that people were ready for the next chapter of the band. There have been a lot of people who have said things like, “This band is more than just the singer — there are four other dudes who devoted 10 years to this project.” I think people paid attention to that right away.

Real Friends have always had such a strong community behind them, and I think that is a testament to how well the transition has played out. That being said, the recent singles are now your highest streaming songs to date. Has that completely exceeded your expectations?

What was the biggest growth moment or life lesson you learned from the last year of this whirlwind experience?

Seeing that it is possible to do this as a career and have it be a full-time part of my life. I’m a bit older and have been in a couple of bands. For 15 years of my life, I’ve been playing in punk bands and metal bands, maybe we would make a thousand bucks or barely break even after a tour. I’ve spent my entire career being in vans and sleeping on floors, so to be able to hop into an established band like Real Friends was a big learning lesson for me. I’ve also learned a lot with co-writing and working with other producers. We have had trips to Nashville, Los Angeles and Orlando, working with a bunch of different people.

What were some of those standout co-writing experiences?

Andrew Wade [Neck Deep, A Day To Remember] is someone we did a ton of stuff with. We did “Nervous Wreck,” “Storyteller,” “Always Lose” and “Tell Me You’re Sorry” and have been finishing up some more stuff recently. He’s been a huge part of everything we have been doing. We did some writing with Mike Green [Set Your Goals] in LA, and that was really cool. He’s extremely talented and knowledgeable when it comes to music theory. Recently, we also did some writing sessions with Chris Carrabba from Dashboard Confessional and ended up writing two songs together.

Being born and raised in Canada, what were some of your biggest Canadian musical influences growing up? Additionally, how do you compare the experience of touring Canada, to now being at the center of an American-based band?

I could talk about that all day because that’s very much where I came from. I grew up in Kelowna, BC which is where I first started getting into heavier music. The first bands that got me into alternative music were Stutterfly, the Bleeding Alarm and Cry The Afflicted. I moved to Vancouver, BC when I was 14 or 15, and that’s where things started to take off for my musical career. There were so many great bands in Vancouver. We had Living With Lions, and Lights Below, but also these bigger names like Daggermouth and Gob. It’s funny because all of those people were five years older than me, but now we’re all homies. I definitely grew up looking up to all of those musicians and now they are my buddies.

Even the Victoria, BC scene was great. I used to be in a metalcore band and we toured with a band called Fall in Archaea, who now have members in Spiritbox. One of the interesting things that I experienced from being in an international touring band is how stuck in Canada Canadian bands get. There are a couple of bands like Alexisonfire and Billy Talent who got out, but so many of those other bands just toured Canada over and over again because it’s hard with visas. Now being in an American band, I just want to tour the whole world. There’s more to do in the states and you could tour the states three times a year and you are not beating a dead horse at that point. However, if you’re a Canadian band, you don’t need to do any more than that.

With the recent release of the single “Always Lose” it feels like the band is treading into darker and more somber territory both lyrically and musically. What was the process of creating this song?

I can’t remember who exactly came up with the guitar riff for the song, but it definitely has that twangy, midwest emo kind of sound to it, which is what we were really trying to focus on. As far as the lyrics go, it was really collaborative. We wrote this song with Andrew Wade, and when it came together we came up with a topic of whatever was on our mind so we could all brainstorm lyrical ideas. We have a note session that is shared with a live feed with everyone so we can write down our ideas and that’s how this song came to be.

Something that has been so exciting to see is that Real Friends has released reimagined versions of every new song so far, whether that is an acoustic version or something entirely different. What inspires you to do this?

Yeah, we have done one for every song, and we actually have one coming out pretty soon for “Always Lose.” This all goes back to the idea of really wanting to focus on every single song and make sure that no song is skipped or missed. What better way to highlight and bring focus to a song than to release a reimagined version of it?

What has currently been inspiring you as you work on new music for Real Friends?

Musically, I have been listening to a lot of Novo Amor, Half Moon Run and Patrick Watson, so a lot of really chill stuff. I love the Story So Far’s Proper Dose record, Softcult and Hot Mulligan. I’m not just a musician — I’m a fan as well and spend insane amounts of time diving into music, so I’m constantly up to date on what’s going on in the music world. Life experiences are also really inspiring me to write. Music gives me ideas, but when it comes to writing lyrics or how I want to sing something, it all comes from what I experienced in my life and how I can convey that in a song. I came from a shitty home life with a single mom, being very poor and having to raise myself. I continue to deal with things and my mental health, so when I see things around me, it influences me to write.

I imagine throughout the coming years as you front the band, that you will continue to help your fans in the process through your honesty in your lyrics. Do you ever think about the impact your music is having on fans who might be going through something?

Absolutely. The story of why I am a musician in the first place is related to that exactly. When I was a kid, I had no friends, struggled with being anti-social and I felt very lost as a kid. I went to my very first concert, which was Stutterfly, and that opened up a whole new world to me. Music did save my life and introduced me to other weird people. Growing up in Kelowna, it was very much not my scene and just beach bros. When I moved to Vancouver, there was more variety and emo kids. In my high school, there was a whole bunch of kids who liked Underoath, the Used, and AFI. That created this community for me, and so much of why I wanted to be a musician in the first place is to be able to offer that experience and give back because it gave me so much. The demographic has definitely aged a bit, and we’re not playing to 14 or 15-year-old kids anymore. They are more like 25 and up, but we’re still the same people. We’re still the same fucked-up family that needs this community because it’s all we’ve ever known.

Real Friends are heading out on tour this September. You can grab tickets here.