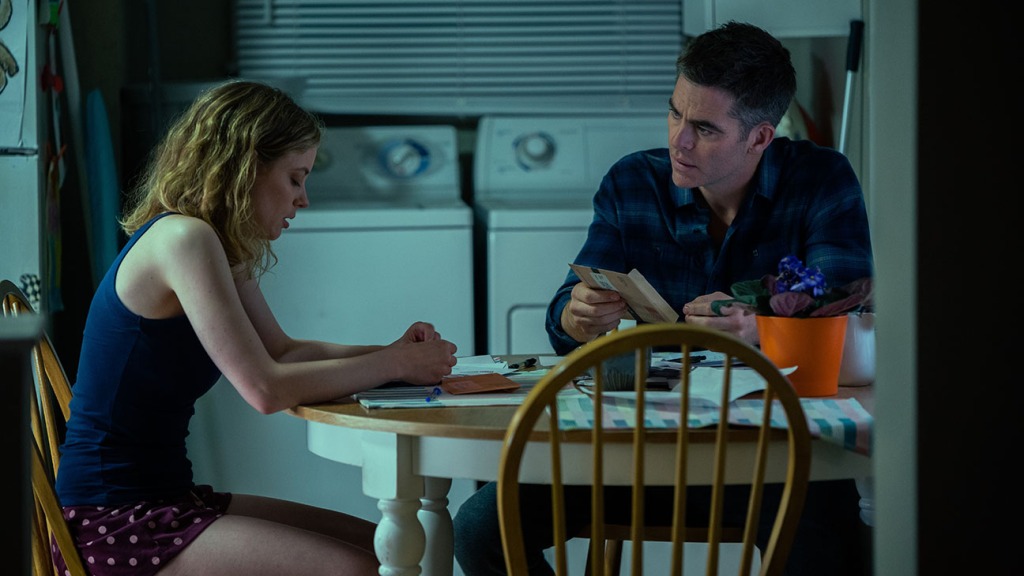 In the opening sequence of The Contractor, a pastor leads his congregation in a prayer for “our protectors,” meaning the Army Special Forces headquartered in nearby Fort Bragg. Soldiers, ex-soldiers and their families fill the pews. Among them is medical sergeant James Harper, a man of few words and a thousand-yard stare, portrayed with a contained and subtle physicality by Chris Pine.

When James’ thoughts drift away from the sermon — perhaps to the growing stack of unpaid household bills or his torn-up knee or the deployment he just completed, his fourth in five years — it’s his young son’s “amen” that brings him back. That instant of connection is fleeting but potent, a signal that this story is as much about fathers and sons as it is about the cost of being a good soldier.

The Bottom Line A solid B movie topped by an A-plus performance.

There are serious ideas, damning ones too, in the screenplay by J.P Davis, as it explores the flip side of jingoism without lapsing into simplistic politics. The intended impact of some of those ideas — involving militarism, class, profiteering and Big Pharma — grows muddled, though, as the film shifts into a second half driven by action set pieces. Director Tarik Saleh, whose previous feature was the excellent Cairo-set neo-noir The Nile Hilton Incident, stages the shoot-’em-ups and explosions effectively, but it’s the film’s quiet exchanges that carry the most visceral punch.

In a welcome change of pace from the glossy superheroics and sci-fi of high-profile movie franchises, Pine delivers a performance that’s fueled by its tightly coiled restraint. In a glance, a grimace or the way he leans James’ motorcycle into the curves of a rural road, the actor reveals volumes about his character’s preternatural focus as well as his gnawing doubts. He has fine scene partners too, key among them Gillian Jacobs, as James’ understandably anxious wife, Brianne, and Eddie Marsan, who plays an ex-military tarnished angel of sorts who provides safe-house shelter when James finds himself a hunted man in Berlin.

And, notably, The Contractor reteams Pine with Ben Foster, six years after they brought a fraught fraternal bond to memorable life in Hell or High Water. That was a movie that fired on all cylinders. Though they’re working here with lesser material — less lyrical, more pointed — the unforced chemistry between the two actors (who also appeared together in The Finest Hours) is affecting.

They play brothers of a kind, Green Berets who went through combat together, Foster’s Mike the slightly older superior officer. He enters the story offering a bracing dose of gallows humor at the funeral of a fellow veteran, the latest in a string of suicides among his and James’ friends and colleagues. One of the film’s core concerns is the way “our protectors” can be reduced from revered to disposable. In James’ case, that transition happens in a flash: The medic is given an honorable discharge from the Army after his bloodwork reveals a smorgasbord of self-administered drugs for his knee. He takes the news that he’s been cut off from his pension and health care, not to mention his career, in stoic silence. Eventually, and over Brianne’s objections, he asks Mike to hook him up with one of the private contractors offering “real money” for his specialized skills.

James’ new boss, Rusty Jennings (Kiefer Sutherland), is a heavily tattooed gentleman cowboy who tends to heirloom tomatoes on his ranch and tosses around phrases like “direct presidential authority under Title 50” and “deep black OGA offshoot” while dispensing former soldiers on covert missions. He shares his reasons, and Davis’ screenplay overdoes the explaining, in a monologue about exploitation and the value of forming “our own tribe.” There’s a similar overload of thesis sound bites when Mike assures James that “it’s OK to cash in. … We’re all just mercenaries in the end.” Mike’s spacious new house and his worries about his special-needs son (Nicolas Noblitt) have already made his priorities clear.

James’ first assignment for Rusty takes him to Berlin, with Mike leading a team that includes a no-nonsense former Mossad agent, Katia (Nina Hoss, of Barbara). Their target is a Syrian virologist (Fares Fares, who toplined The Nile Hilton Incident), supposedly a bioterrorist with links to al-Qaida. He’s also a married father of sons, rousing complicated feelings in James as he surveils the family. During a tense lab scene that calls to mind a pivotal episode of The Americans, the scientist asks James a key question that stokes further uncertainty: “Do you even know who you’re working for?”

The answer to that question gets a bit lost amid all the high-octane action that propels the movie’s later stretches, much of it taking place in the sewers of Berlin. That’s perhaps a fitting metaphor for the murky political waters in which James finds himself, even as some of the derring-do strains credulity.

Saleh, working with the same production designer, cinematographer and editor from his previous feature, makes evocative use of locations in Germany, Romania and the States, and Alex Belcher’s score is in sync with the narrative’s gritty, in-the-moment pulse. And yet a sense of the vague and the overcooked creeps into the story as it proceeds. It’s the supremely well-etched character-focused groundwork that Saleh and his cast have laid that sustains the drama.

The helmer crafts a convincing emotional throughline between James’ childhood with his gruff military dad — whose idea of a birthday present for a preteen boy is an American flag tattoo — and his present-day parenthood. Disavowing his father’s legacy, he’s determined to offer something more nurturing to Jack (Sander Thomas), the son he’s had to spend many months away from and is still getting to know.

At a moment when headlines are fanning the flames of war, The Contractor zeroes in on the soldiers who are trained to kill and often taken for granted. But it never stoops to empty flag-waving rhetoric. Instead, it asks what the protectors are protecting us from. And even as it stumbles, its ambivalence is its strength; double-crosses and geopolitics are indistinguishable, and whether the actions are front-page or clandestine, the setting Europe, Iraq or Afghanistan, the business of war persists.