Catch Louis Tomlinson, Meet Me @ The Altar and more on the road 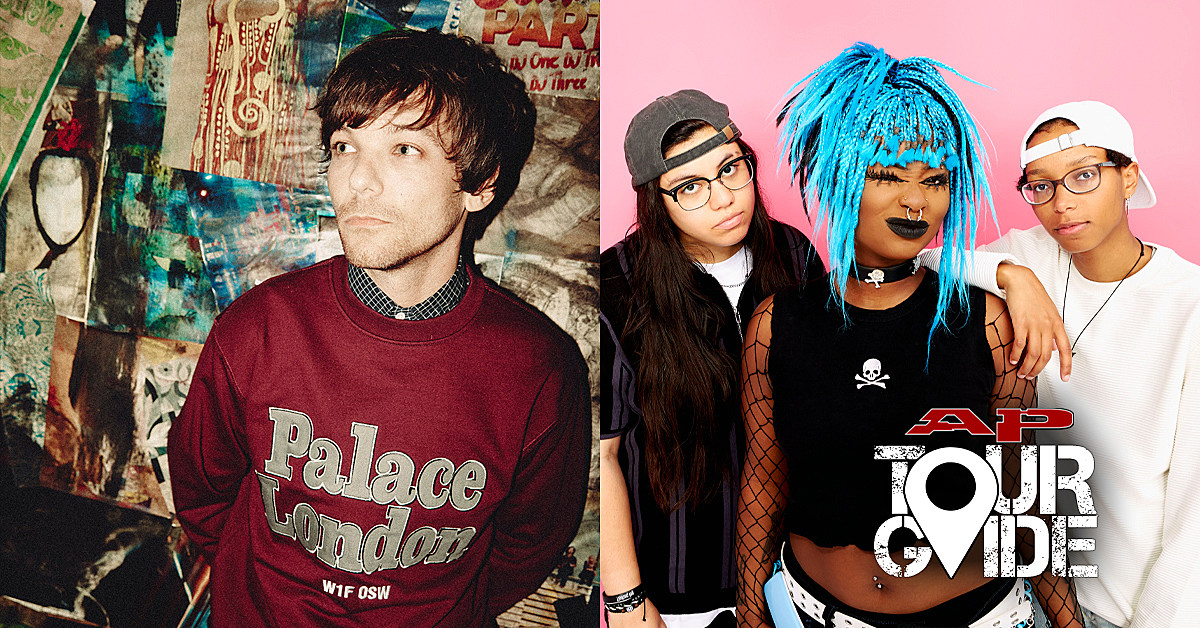 This is Tour Guide, a weekly recap of the concert news music fans don’t want to miss. Basically, run — don’t walk — to get these tickets.

Following two intimate performances in New York City and London, AP cover star Louis Tomlinson will head to North America in 2023. Beginning May 26 in Uncasville, Connecticut, the run will include stops in Indianapolis, Chicago, Seattle, Vancouver and several other cities, much to the delight of his fans. “I know every artist says this, but I’ve got a deep fucking connection with my fans. I think of it as one entity,” Tomlinson told AP in September. You can grab tickets here. —Neville Hardman

Meet Me @ The Altar announce their first-ever headlining tour

Rising pop-punk titans Meet Me @ The Altar have made a name for themselves through their sheer relatability and high-energy music. Now, they’re set to headline their own tour across the U.S. and Canada in spring 2023. Meet Me @ The Altar will kick off their run March 2 at the Gramercy Theatre in New York City, hitting several major markets before wrapping up April 4 at Orlando’s The Abbey. Alternative-rock trio Young Culture and punk duo Daisy Grenade will support the run. Tickets go on sale Nov. 18 at noon EST here. —Alessandro DeCaro

Can you believe it? It will be 20 years since AFI released their breakthrough album Sing the Sorrow in 2023, and for this momentous occasion, the Bay Area crossover-punk legends have planned something truly spectacular. On March 11, AFI are set to perform their beloved record in its entirety for one night only at the Kia Forum in Los Angeles. For the anniversary celebration, AFI have curated an eclectic bill of artists to open, from the recently reunited ‘90s punk/emo veterans Jawbreaker to Chelsea Wolfe and Choir Boy. Tickets are available here. —Alessandro DeCaro

Spiritbox will embark on their first headline tour this spring

Spiritbox have announced their first-ever headline tour for 2023. The AP cover stars will trek across North America this spring, beginning their month-long run April 10 in Vancouver. They’ll make stops in San Diego, Dallas, Atlanta, Boston and many other cities before concluding May 10 in Minneapolis. After The Burial and Intervals will support. Tickets go on sale Nov. 18 here. —Neville Hardman

On Jan. 20-21, Homesick Festival will touch down in Berekely, California at the UC Theater for two nights of highly curated music from an eclectic and diverse lineup. The festival, which was founded by Ceremony guitarist Anthony Anzaldo, is set to feature prominent acts such as Snail Mail, Deafheaven, Fiddlehead, Screaming Females, Sheer Mag and Sunami, among many others. Tickets are on sale now here. —Alessandro DeCaro

PUP and Joyce Manor will hit the road early next year

After putting out their fourth album, THE UNRAVELING OF PUPTHEBAND, PUP have spent the better part of the year on the road. Naturally, after coming off a massive run in support of that record, the Toronto punks are headed out the door again at the start of the new year. This time they’ll embark on a co-headliner with Joyce Manor, which kicks off March 1 in Baton Rouge, Louisiana. Tickets go on sale Nov. 18 here. —Neville Hardman

Blur to headline Wembley Stadium after an eight-year hiatus

2023 marks 35 years since the influential Britpop quartet Blur’s inception, and after a nearly eight-year hiatus from playing live, the band have officially announced plans to return to the stage. On July 8, Blur will headline the iconic Wembley Stadium in London to play a career-spanning set from their vast and beloved catalog. Rapper slowthai and pop artists Self Esteem and Jockstrap will support the highly anticipated reunion show. Tickets go on sale Nov. 18 here. —Alessandro DeCaro

Lizzo is bringing her “Special” tour into the new year

Shortly after concluding the first leg of her North American tour, Lizzo has unveiled a new run of dates for 2023. The pop star will make stops in over a dozen cities, starting April 21 in Knoxville, Tennessee. The run will wrap up June 2 in Palm Desert, California. Latto is set to support. Tickets go on sale Nov. 18 here. —Neville Hardman

Hard-rock mainstays Highly Suspect are set to heat things up with their upcoming “Ice Cold Winter” tour in 2023. The band are bringing along alternative-rock quartet Dead Poet Society, ensuring a high-intensity night of heavy riffs and anthemic sing-along choruses. Highly Suspect are riding a high after the release of their fourth studio album, The Midnight Demon Club, this past fall and will also be supporting arena-rock legends Muse on select dates of their upcoming world tour next year. Tickets for the “Ice Cold Winter” tour go on sale Nov. 18 at 10 a.m. local time here. —Alessandro DeCaro