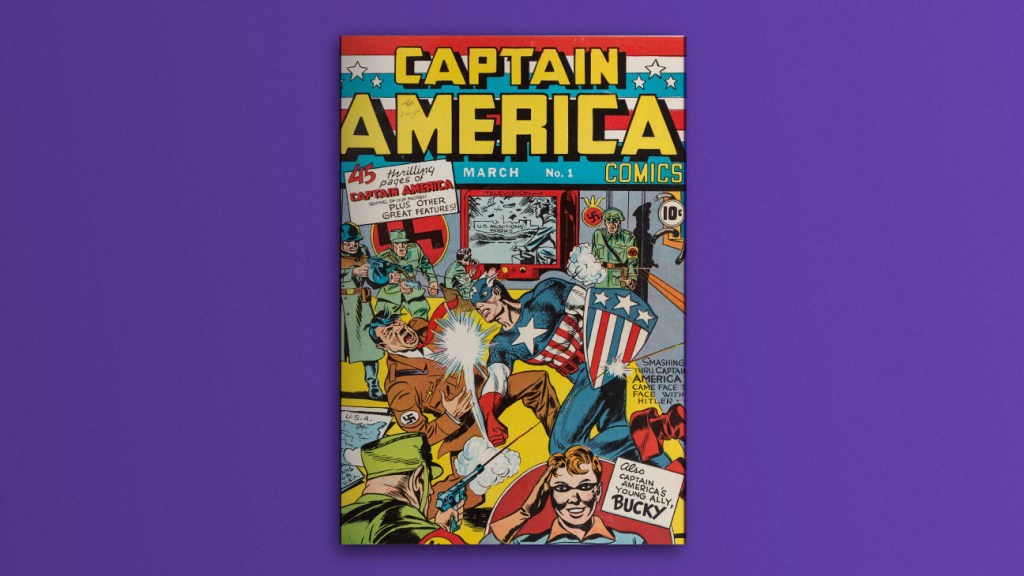 A near mint comic featuring the very first appearance of Captain America sold Thursday for just over $3.1 million.

The sale marks a record for the comic, Captain America Comics No. 1, and is now one of the top five most expensive comics ever sold. The final price was $3,120,000, which included the buyer’s premium. It sold as part of Heritage Auctions’ comics and comic art events that runs through Sunday.

The comic hit newsstands in December 1940, a full year before the Japanese attack on Pearl Harbor that would thrust the United States into World War II, and features one of the comics medium’s most iconic covers: the hero punching Nazi leader Adolf Hitler.

Joe Simon and Jack Kirby created the hero for Timely Comics, the predecessor to Marvel Comics, with the now well-known tale of a frail young man named Steve Rogers who is injected with a serum that turns him into a super-soldier. Also introduced was Cap’s sidekick, Bucky, who in modern times would become the hero known as the Winter Soldier and be featured prominently in Marvel Studios movies and a Disney+ series. The comic was an instant hit and sold hundreds of thousands of copies a month.

There are only three copies at the high CGC 9.4 grade, and only one other time has one of them been up for auction. (According to the CGC census, a sole 9.8 copy exists but has never seen the light of an auction house).

Vintage comics continue to command higher and higher price points, and this is one of only three that have publicly sold for over $3 million. In September 2021, an Amazing Fantasy No. 15, featuring the first appearance of Spider-Man, sold for $3.6 million, holding the record for most expensive comic. An Action Comics No. 1 sold for $3.2 million in 2014, before the current craze for comics and comic art.

2022-04-07
Previous Post: Sum 41’s Deryck Whibley Has Gone Through Heaven and Hell to Get to Sobriety
Next Post: Laura Dern, Liam Hemsworth to Star in Netflix Romance ‘Lonely Planet’