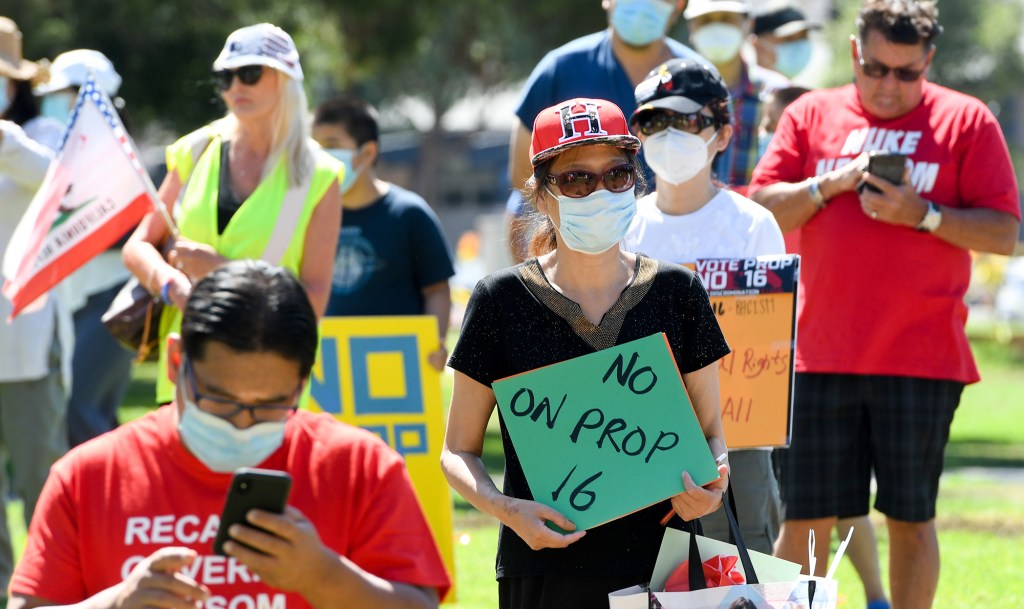 Californians rejected Proposition 16 on Election Day by a margin of 56 to 44 percent. The measure would have restored racial preferences in California’s public hiring, contracting and university admissions.

Its rejection was a victory for equality under the law. For me, it was a personal victory as well.

I had been with the No on Prop. 16 campaign for only a few weeks when my brother suddenly passed away in September. He died of complications from a massive heart attack before the age of 50. I thought about walking away from the campaign, but in the end, I stayed because this issue is a cause I take personally.

Prop. 16 proponents insisted that racial preferences were necessary to “level the playing field” for disadvantaged groups. They never really cared about the disadvantaged; they cared about racial bean counting.

My family is intimately familiar with societal disadvantages, and my brother’s death has offered a searing reminder. Prop. 16 would have legalized discrimination against kids of Asian descent who struggle with economic and cultural disparities — just like my brother and I did.

All is not smooth sailing for Asian immigrants — even though the backers of racial preferences often act as if Americans of Asian origin have things too easy, due to the well-known fact that many do extremely well academically.

My family immigrated to California from China when I was 10 years old; my brother was 14. We did not speak English, had little money, and settled in inner-city Oakland.

From the ghetto, I went to Cornell University. My brother stayed to take care of our parents. Not a sacrifice that upper-middle class kids who would have benefited from racial preferences would ever have to make.

During my sophomore year at Cornell, my mother, then a machine operator, was permanently injured when a forklift ran over her ankle. Because of both my parents’ limited English, it was my brother who had to take her to endless doctors’ appointments, surgery and physical therapy, and handle the cumbersome worker’s compensation process. Again, not an obligation that rich “underrepresented minorities” who would benefit from racial preferences could ever comprehend.

Some years after Cornell, I returned to California to attend Stanford Law School — in part to make it possible for my brother to pursue interests outside of the state. After graduation, I turned down a job at the State Department — which I’d very much wanted — to work at a Wall Street law firm, because I believed making more money was the right thing to do for my family. A few years later, I walked away from the job because legal study and practice was never for me. By then, the opportunities I had given up for my family were gone, and my professional pursuits since then have largely not been lucrative.

So, my brother and I fought incessantly, often about money, and how much of it I did not make despite my fancy degrees. “Dreams and aspirations are for rich people. What are you?” he admonished me. I believed I had the right to dream just like the rich kids — of any color — with whom I had gone to school.

In reality, he was right. As the daughter of a poor family, I simply did not have the same room for error in my professional pursuits, and when I fell from shooting for the moon and the stars, I was not the only one who paid the price. My decision to turn my back on the big bucks meant that I could give my parents, or my brother, little or no financial assistance.

Over the years, my brother developed severe health problems and suffered immense psychological stress from shouldering the burden of caretaker for our family. The problems ultimately caught up with him.

That fact was of little interest to Prop. 16 advocates who yammered on about the need for diversity and representation. In their view, there were already too many Asian faces at the University of California.

That was a key reason why they lost. Many of us who worked our way up from an un-level playing field never asked the government for racial preferences. We simply wanted it not to discriminate against us or the kids who look like us. Californians inherently understood that, and they voted for equality and fairness by rejecting Prop. 16.

Ying Ma was the communications director of the No on Prop. 16 campaign and the author of “Chinese Girl in the Ghetto.”