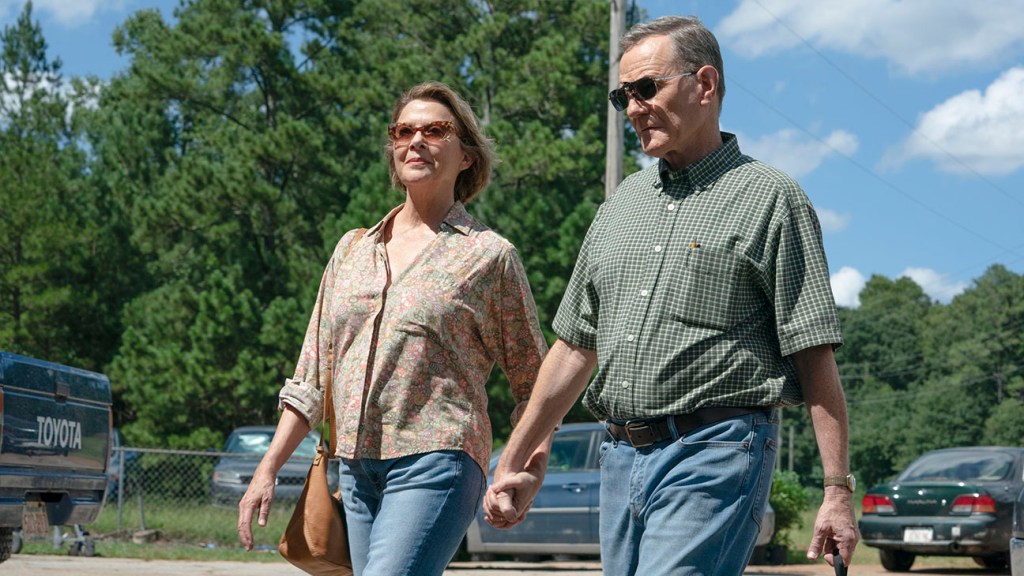 Don’t be deceived, Jerry & Marge Go Large is no Barb and Star Go to Vista Del Mar. The title appears to promise a raucous caper, but unless you’re tickled by endless shots of Bryan Cranston and Annette Bening chortling away while exchanging the kind of twinkly-eyed, adoring looks that ought to be outlawed for couples married 46 years, the amusement is spread awfully thin. David Frankel continues coasting on his Devil Wears Prada rep, between TV gigs and unwatchable features (Collateral Beauty, anyone?). But this utterly toothless, glorified Hallmark movie for Paramount+ proves the director is only as good as his material.

Brad Copeland’s pedestrian script was inspired by a 2018 HuffPost article by Jason Fagone, which outlined how Jerry Selbee, a retired Kellogg’s factory employee from Michigan with an aptitude for statistical calculation, found a loophole in a state lottery that allowed him, his wife Marge and the friends-and-family corporation of bettors they formed to pocket $27 million in winnings over nine years. Without breaking the law.

The Bottom Line Actually, they go small and flat.

It’s unquestionably an intriguing story, with a human interest angle amplified here by having do-gooders Jerry and Marge spread the wealth to the residents and business owners of a small blue-collar town on economic life support. But the movie is stubbornly uncinematic and surprisingly low-stakes. Also tiresomely cute, with the wildly overqualified Cranston and Bening in the title roles dialing up the folksy oldsterisms to grating degrees.

Copeland spells out every thematic undercurrent, particularly the way that Jerry’s fixation with numbers has made him not so great at relating to humans, even his own children. But the lottery scheme finally allows him to use his gift to connect to people.

The schmaltz is applied with a trowel in depicting his relationship with the briskly efficient Marge, who admires her husband’s brain but has lately been craving a little more romance. Or maybe not just lately, given the emphasis placed on them skipping their prom to get married in high school. When a script so painstakingly signposts everything, it’s not hard to guess they’ll be dancing in the moonlight and swooning like teenagers before we’re done.

David Cronenberg in a recent interview said, “You don’t make a movie about nice people who are all nice to each other. That’d be so boring.” Of course there are exceptions, but movies like Jerry & Marge Go Large validate that point. Everyone in this hokey version of Evart, Michigan, is just so gosh-darn nice, from Jerry’s widowed accountant Steve (Larry Wilmore) to quirky neighbor couple Howard (Michael McKean) and Shirley (Ann Harada), that they’re dull as dishwater. The same goes for Jerry and Marge’s adult offspring Dawn (Anna Camp) and Doug (Jake McDorman). Even the latter’s complaint that his dad never tossed a football with him is delivered almost apologetically.

Conflict, such as it is, comes when another lottery syndicate gets aggressive about edging out the competition, led by smug Harvard senior Tyler (Uly Schlesinger). With his ageist quips and elitist assumptions about the Selbees as easy prey, he’s an asshole so irredeemably soulless that he exists mainly to be taken down by Jerry with The Big Speech. Mean people may prosper, but they’ll end up alone and unhappy in this rose-tinted world. (For the record, the real students who got in on the lottery scheme came from M.I.T.)

A more imaginative script might have injected some tension via the Boston Globe reporter (Tracie Thoms) sniffing around the story. But given that the state lottery management is perfectly chill about savvy people buying up massive numbers of tickets in the “roll-down” weeks between jackpots, and then scoring with multiple low- or mid-level wins, the threat of exposure doesn’t up the temperature at all. Unless you live in the most culturally deprived backwater, it’s hard to imagine anyone getting too worked up over whether the good folks of Evart get to revive their beloved Jazz Festival.

One quirk of this particular lottery scheme is that it requires extensive hours of human labor, printing out thousands of tickets and then checking them manually for days and days at a time. But nothing that Frankel or Copeland do can make the sight of Jerry and Marge in their Walmart wardrobes poking away at lottery machines in a Massachusetts convenience store (after the lottery gets abruptly shut down in Michigan) interesting.

As the cashier at one of those stores, Rainn Wilson contributes some affable stoner humor, but mostly he’s on duty to provide golly-gee narration during Jerry and Marge’s long hours of car travel, which, like everything else, tries too hard for charm. The road trips are accompanied also by random vintage needle drops — The Spencer Davis Group, Springsteen, The Kinks, The Who. Those at least are preferable to Jake Monaco’s sappy score.

The movie looks crisp enough though is surprisingly undistinguished in that department considering it’s shot by gifted French DP Maryse Alberti, whose name is just one more entry in a mystifying list of talent attracted to this personality-free material. I was so bored out of my mind I started free-associating the title with Large Marge — the phantom truck-driver in Pee-wee’s Big Adventure — and wishing I was watching her origin story instead.

2022-06-15
Previous Post: Tom Hanks on Whether He’d Be Able to Star in ‘Philadelphia’ Role as a Straight Actor in Modern Times: “No, and Rightly So”
Next Post: Ozzy Osbourne home from hospital and ‘recuperating comfortably,’ thanks fans for ‘prayers’ post surgery