Bruce Springsteen is teasing an announcement tomorrow morning (Sept. 29) via his social media, and while no details have yet been confirmed, it seems The Boss is about to reveal a long-rumored new album featuring classic soul covers.

The latest teaser features a static photo of an old car radio, with the audio recorded as if an unseen listener was turning the dial through static to a different channel every few seconds. Brief snippets can be heard of Springsteen performing Frank Wilson’s “Do I Love You (Indeed I Do),” Tyrone Davis’ “Turn Back the Hands of Time” and The Commodores’ “Night Shift,” itself a tribute to the late Jackie Wilson and Marvin Gaye.

SPIN understands Springsteen worked on the project with longtime producer Ron Aniello, his partner on four albums in the past decade. The most recent, 2020’s Letter to You, debuted at No. 2 on The Billboard 200.

Rolling Stone founder Jann Wenner appeared to have let the cat out of the bag about the new album in an interview earlier this month with Billboard, calling it “stunning.” Meanwhile, Springsteen will perform tomorrow with his wife Patti Scialfa at the first Albie Awards at the New York Public Library, and he’ll also be on stage Nov. 7 at the annual Stand Up for Heroes benefit concert in New York. 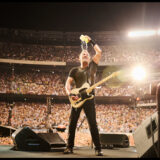 This activity comes ahead of his 2023 world tour with the E Street Band, which begins Feb. 1 in Tampa, Fla. The North American on-sales for that trek courted controversy this summer when some tickets reached prices of $5,000.