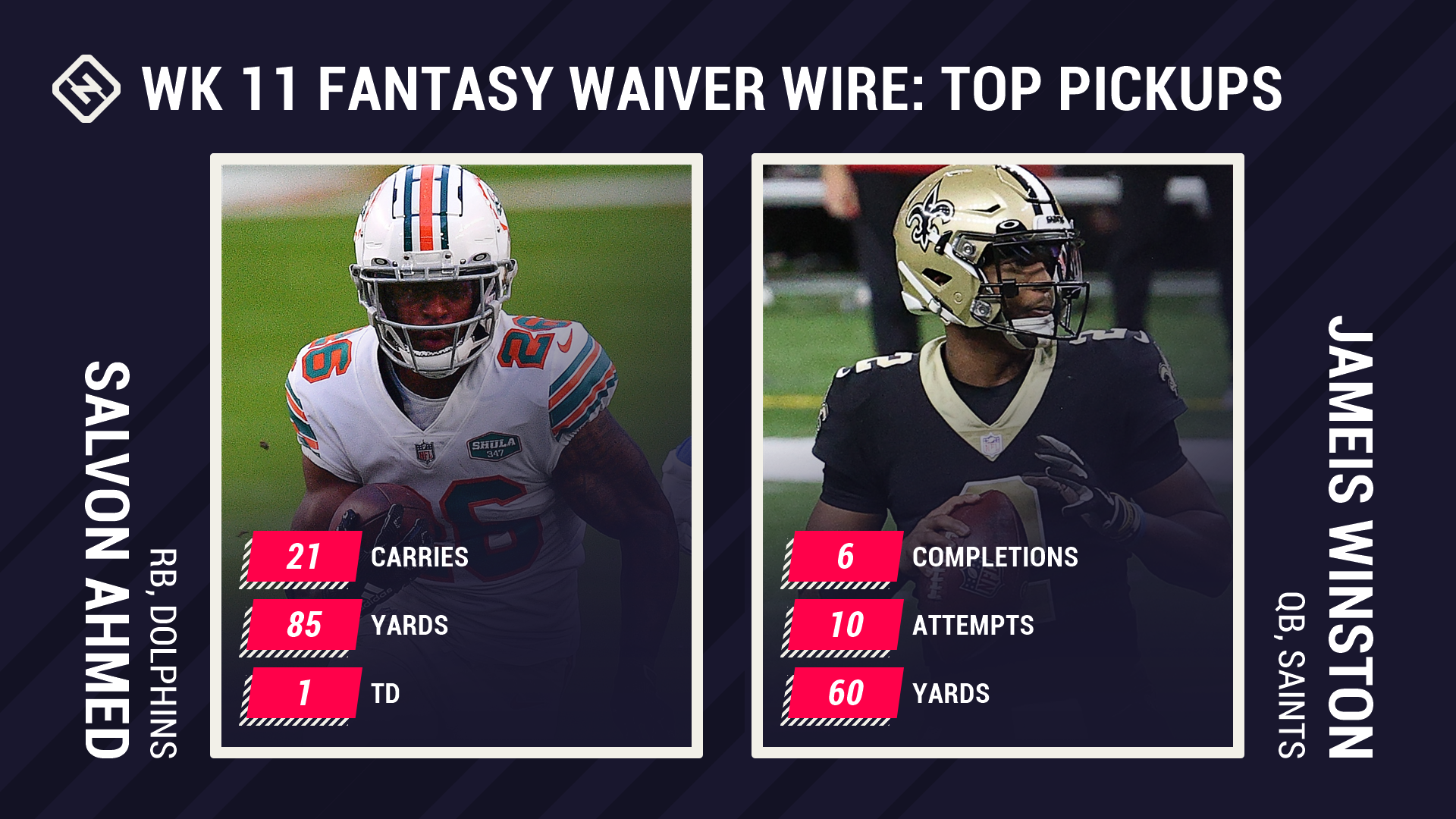 Random running backs have been dominating the waiver wire in recent weeks, and we might have our most random batch among our top Week 11 fantasy waiver wire pickups and free agent adds. The Giants’ Wayne Gallman has been a staple of this list (are you all finally ready to pick him up?), but Salvon Ahmed and Alex Collins were surprise leaders in their respective backfields (just like Kalen Ballage was last week) while Cam Akers finally got a chance to make good on all of his rookie promise. The long-term value of these backs varies — as does the value of breakout WRs Marquez Valdes-Scantling, Jakobi Meyers, and Josh Reynolds and backup QB Jameis Winston — but they’re at least on the pickup radar this week.

Our full free agent list is packed with players who are leftovers from the previous weeks and are still worth considering. Guys like Malcolm Brown, Rex Burkhead, Cole Beasley, Sterling Shepard, Logan Thomas, and Tua Tagovailoa are available in at least 50 percent of Yahoo leagues, and all have enough upside to merit bench spots, at the very least. We also have our usual Week 11 streaming recommendations at QB, TE, and D/ST, which can be found at the end of this list.

It’s tough to recommend using a high waiver claim on any of the backs mentioned above. Gallman will have some near-term value, but with the Giants on bye in Week 11, he won’t be able to help next week. Collins is likely nothing more than a one-week wonder with Chris Carson (foot) due back next week. Ballage and Ahmed are also on borrowed time, but they could both be plenty valuable for at least one more week. If you’re desperate in Week 11, they’re worth more than Gallman. It’s possible a receiver like Beasley, Meyers, Shepard, or MVS has more value to a lot of owners, but they either have medium ceilings or, in Valdes-Scantling’s case, a low floor.

Winston might be the toughest call, as most fantasy owners don’t need a QB. However, with the Falcons on tap in Week 11, Winston could be a top-six QB if Drew Brees is out. Is that worth a waiver claim? It could be, depending on your QB situation.

Wayne Gallman, RB, Giants. Gallman has been operating as New York’s lead back for three weeks now, but he’s still just 49-percent owned in Yahoo leagues. After a big Week 10 (18 carries, 53 yards, two TDs) and news that Devonta Freeman (ankle) will miss at least the next three games, Gallman is poised to be a difference-maker down the stretch. He had 10 more carries than Alfred Morris against the Eagles, including some key carries around the goal line, so while Morris will be involved, this is clearly Gallam’s backfield. New York has a bye next week, but a matchup against Cincinnati in Week 12 will be another chance for Gallman to put up big points.

Salvon Ahmed, RB, Dolphins. Ahmed quietly led the Dolphins backfield last week, but heading into this week, many expected Matt Breida (hamstring), Lynn Bowden, or DeAndre Washington to be more involved. Instead, Breida remained injured and Jordan Howard and Bowden were healthy scratches, leaving Ahmed to dominate carries. He rushed 21 times for 85 yards and a score, seemingly cementing himself as Miami’s lead back until Myles Gaskin (knee) returns. Of course, if Breida is back next week, things could change, but Ahmed is still worth picking up given his workload this week.

Marquez Valdes-Scantling, WR, Packers. Fantasy owners have been eagerly anticipating the activation of Allen Lazard (core) off the IR, but it turns out MVS might have been the real WR2 for Green Bay all along. After disapointing performances early in the season, Valdes-Scantling has turned it up lately, catching two TDs in Week 9 and four passes for 149 yards and a TD in Week 10. Lazard will be back next week — and tough matchups against Indianapolis and Chicago in the next two weeks will limit the value of all non-Davante Adams WRs — but MVS has proven he belongs on fantasy benches as potential boom-or-bust WR3.

Jameis Winston, QB, Saints. Drew Brees took a hard hit in the second quarter on Sunday, but after finishing the half, he was relegated to the sidelines in the second half. Winston came in and completed six-of-10 passes for 60 yards, but more important is his upcoming Week 11 matchup against Atlanta’s 31st-ranked pass defense. If Brees is still out, Winston would be worth starting in all formats, and while it’s tough to justify using a waiver claim on it, he might be worth it given his high ceiling in that game. Taysom Hill will also be in the mix at quarterback, but Winston would still have the most upside.

Kalen Ballage, RB, Chargers. Even with Troymaine Pope back, Ballage was the clear leader in the Chargers backfield in Week 10, rushing 18 times for 68 yards and catching five-of-six targets for 34 yards. Ballage’s ascension is mildly incredible given how bad he looked dating back to last season, but the Chargers have clearly found something they like and Ballage should continue getting a dozen-plus touches every week until Austin Ekeler (hamstring) comes back, which could be several weeks from now.